Years ago if you’d asked me, “What’s your favorite garden aesthetic?” I probably would have said something about lush, tropicalesque, big foliage, dramatic plants, etc.  Over the course of the last couple years that has all changed, in part because of lovely things I’ve seen on the internet, three years of experience and observation in my current garden, and then this trip down under.

I’d been to Australia twice before, both times to subtropical Sydney.  The first time I was maybe 11 or 12 and I was just floored by the fact that everyone had houseplants growing in their front yards.  Aside from that though, those trips weren’t particularly inspiring with regard to outdoor gardening.  I realize not everyone is like this but for me, plants I can never grow are only interesting to a point.  The practical gardener wins out over the curious botanist.

But this trip, we went up to the mountains and spent some time in Leura.  You can get there by train, takes 2 hours. My aunt Ann and her partner Ross have a house that is literally across the street from the Blue Mountains National Park.  And there are trails! Wonderful trails! But first:

Ross is an outdoorsman, although he might have a different title for himself, that’s my impression and it’s meant as an honorable term. He is really fun to talk with — he has great knowledge of history, botany, ecology, gardening, and more I am certain I have yet to discover.  He told me stories about people going missing in these mountains (happens all the time).  One guy who proved particularly elusive was finally found caught in a tree – he had fallen, presumably, off one of these sheer cliffs or into one of the numerous narrow slot canyons, and landed in the branches of a Eucalypt. *shudder*

I think it’s interesting how similar the overall forest canopy color is to ours at home, when viewed from afar/above.  But these trees are not pointy conifers, so the texture is quite different.

One of the first things I saw when we got off the train was – what? – familiar plants.  Hydrangea, Bergenia, little jonquils, some kind of prostrate Juniper.  Where in the world AM I? 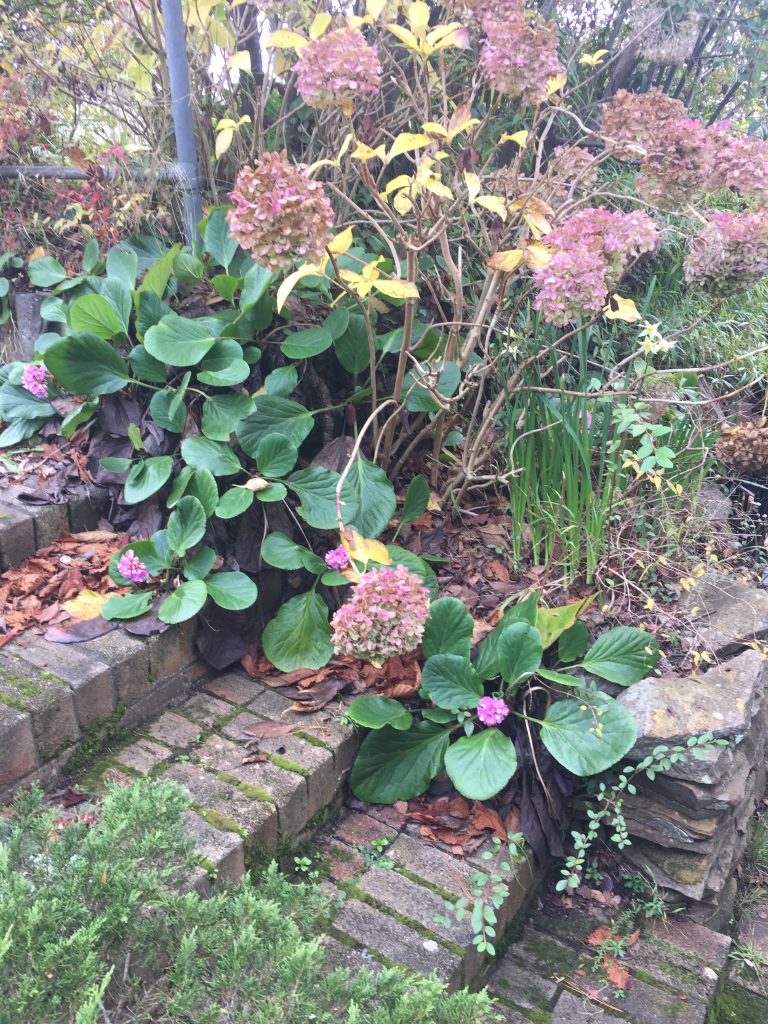 It was June, so akin to our December I suppose, and look who is flowering! 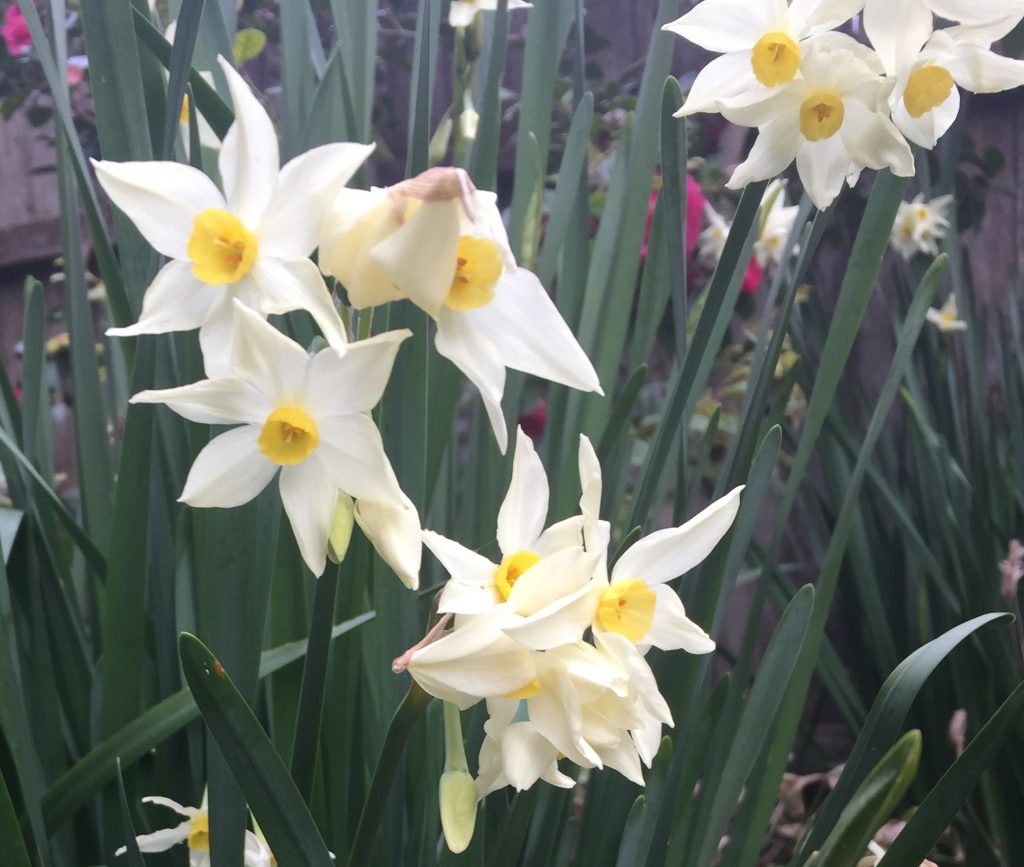 Well it turns out (depending on who you ask, really) European-descended Australians have this long-standing historical aversion to their native plants.  Until more recently, there has been an alignment toward European and North American plants, probably something to do with original white settlers being so incredibly distanced from anything familiar at all, and feeling a strong need for the comforts — and plants — of home.   Another story might say that there wasn’t contempt for the bush but rather a fascination, but at the same time an unfamiliarity, and an interest in finding out what plants from home (the UK) might survive in OZ.  I’m no anthropologist, so correct me if you have a better story.

All that said, in 2017, the 100th anniversary of my Nan’s birth (my stepfather is from Australia and Nan is his mum), walking through the neighborhoods of Leura I saw laurel hedges, camellias everywhere, Japanese maples, junipers and cypresses, hydrangeas, rhododendrons, azaleas, hellebores, English ivy even and OMG that Garrya elliptica! And a scant few native Australian plants.  You would hardly have known you weren’t in the Pacific Northwest but for everyone driving on the left side of the road.  I guess I get it – I mean part of the reason I feel so compelled to plant Australian plants in my garden is to remind myself of the place, and people I love there.

Side note: at the Royal Botanic Garden in Sydney  (to which I made three visits despite earlier proclamation of lack of interest in subtropical can’t-grow-em plants), there was a rather fascinating exhibit? planting? what do you call it? Section of the garden that included a lot of plants that Indigenous Australians used for various purposes such as food, medicine, material, shelter, etc., and some plantings that I can only describe as re-enactments of the first attempts at gardening by Europeans upon arrival.  I learned that they were so bereft of understanding and experience with Australian climate, weather, and soils, that they failed miserably in all aspects of food production and had to send ships to South Africa to bring food, at least until they started figuring it out.  Wow guys. But wait, what does this mean for PNW gardeners who like Australian plants? I’ll tell you.  The soil is basically 50% less fertile than our native volcanic mudflow loamy stuff.  FIFTY PERCENT LESS.  That’s what Proteaceae and Eucalyptus want.  Cheap dates, right? Nice work if you can get it…

Anyway back to Leura.

I picked up a book titled Native Plants of the Blue Mountains, which is a brief but fascinating handbook which covers about 220 plants and divides them into several habitat types, which were very apparent on our hikes.  We started with what is called “heath” – this is the habitat on the tops of the sandstone mesas, which has incredibly thin, almost nonexistent soil (it’s really just sandstone), and is dominated by Banksia and Hakea as the largest overstory.

I took almost every single photo in portrait mode which I would not have done if I’d been planning on blogging … Sorry for the inevitable long scroll.

In this photo, see all the black stuff? Banksia branches and seed pods.  This area experienced a fire about 5 years ago.  Fire is necessary and rejuvenative and scary as hell for humans who live here in OZ.  Same as for us in the North American west. Also, Banksia seeds only open when burned, just like some of our pines.

This little Baeckea was a fairly common sight.  Always sort of rangy, like so many Australian shrubs.  Look at all those Banksia serrata leaves on the ground. That’s the most common Banksia here.

By the way this is more or less the order in which I took these pics, so it’s kind of like you’re just taking a walk with me along this trail. 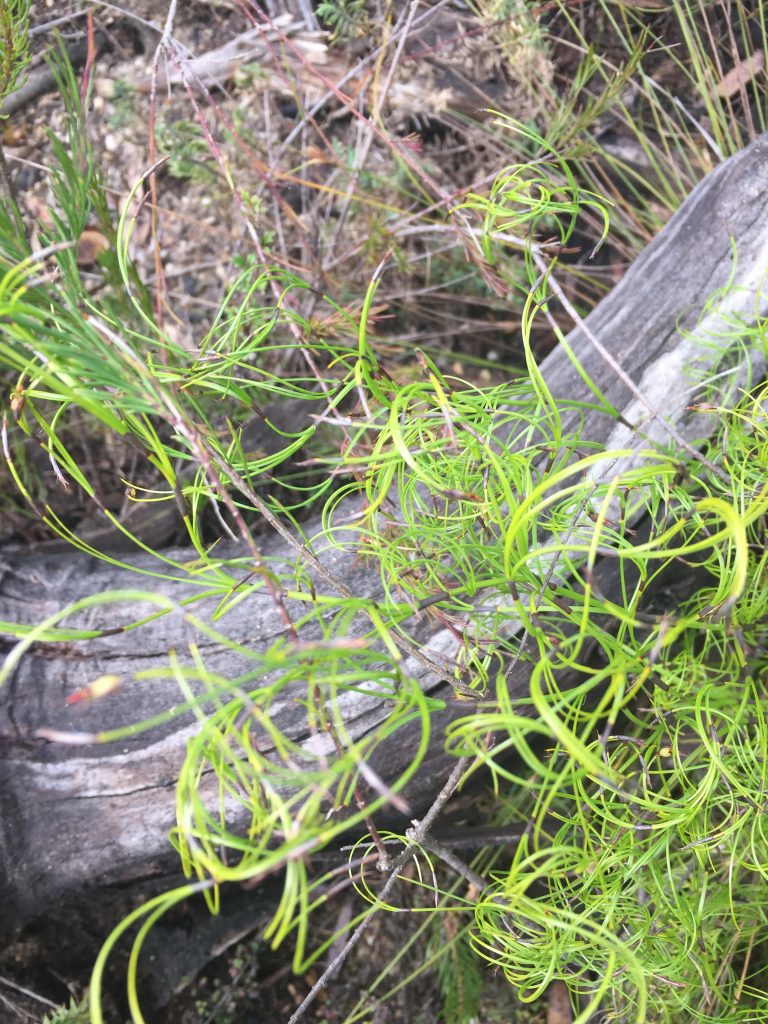 As with any ecosystem where fire is part of the cycle, Australia has pioneer species, and this Pittosporum undulatum is one of them.  It’s actually a pretty nice shrub to small tree with the appearance and habit you’d expect from a fairly large Pittosporum (they pronounce it “pit-TOSS-prum” so now I do too because I like it that way). 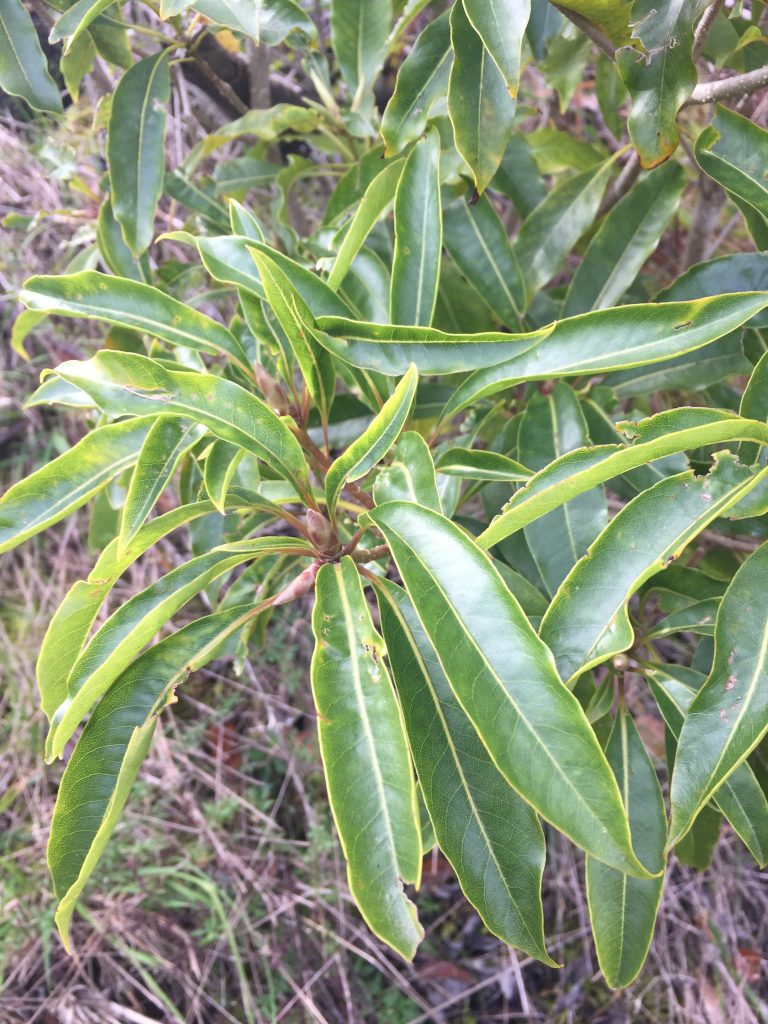 Moss! Rock walls dripping with water! This was not uncommon at all.  I think yes, they do drip all year. This is not a summer-drought climate at all.  It is warm temperate eastern maritime (we are about 70 miles west of the Pacific Ocean), and rainfall is about 60 inches a year. 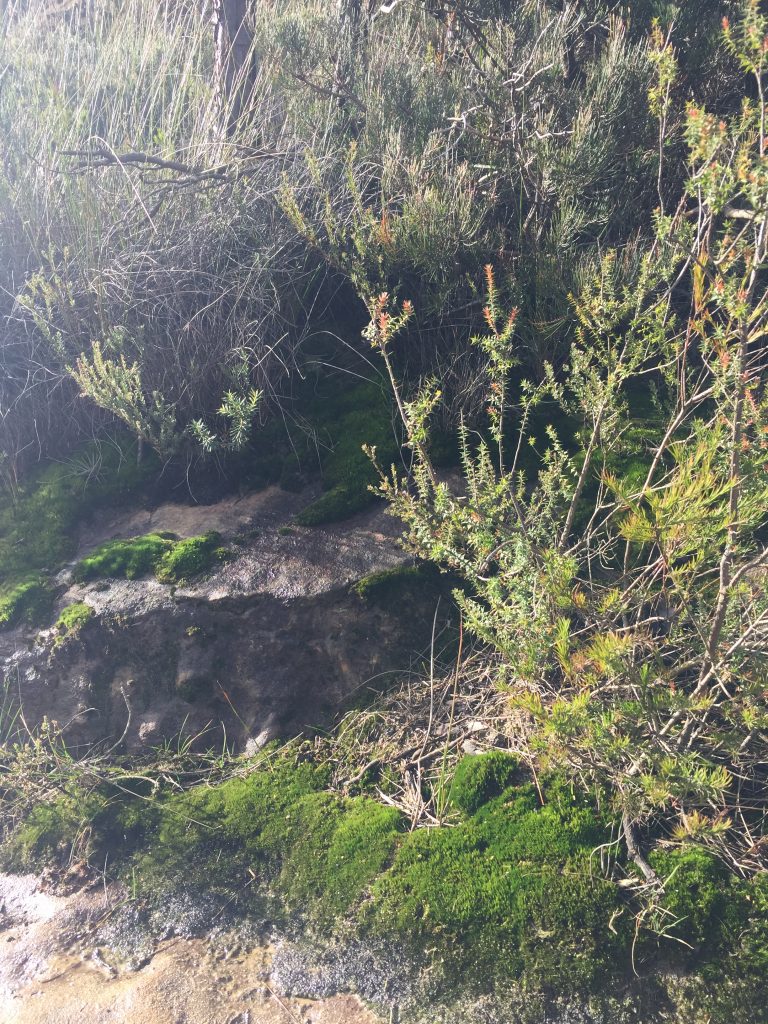 The first Banksia I saw is B. ericifolia. Difficult to photograph, so you get two pictures.  First, the flower in all its glory. 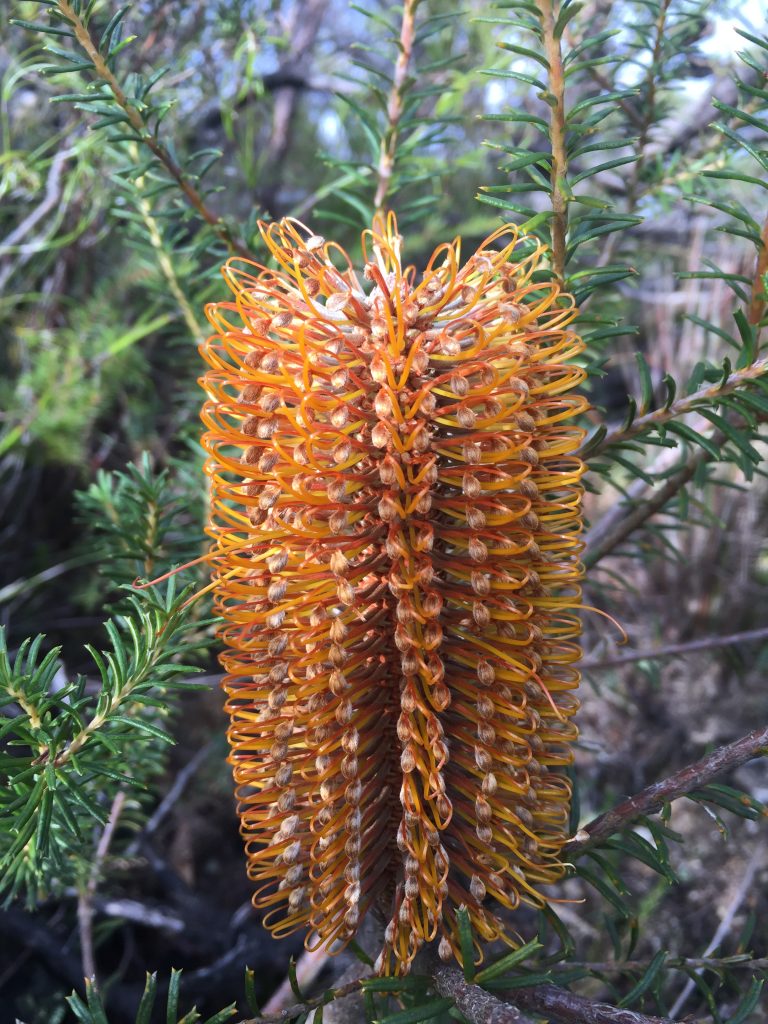 And here we see its typical open branching habit. This is a young plant, probably sprouted from seed right after that fire which would make it 5 years old. 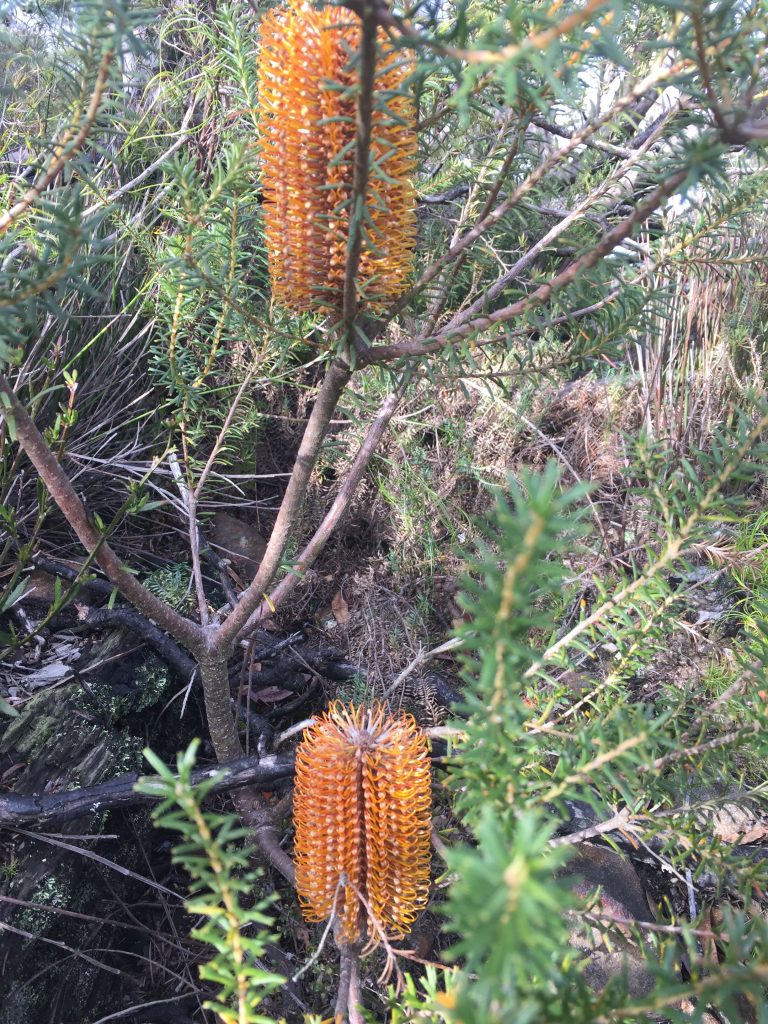 Acacia terminalis, Allocausarina nana, and the blackened skeletons of Banksia serrata. I love this so, so much. 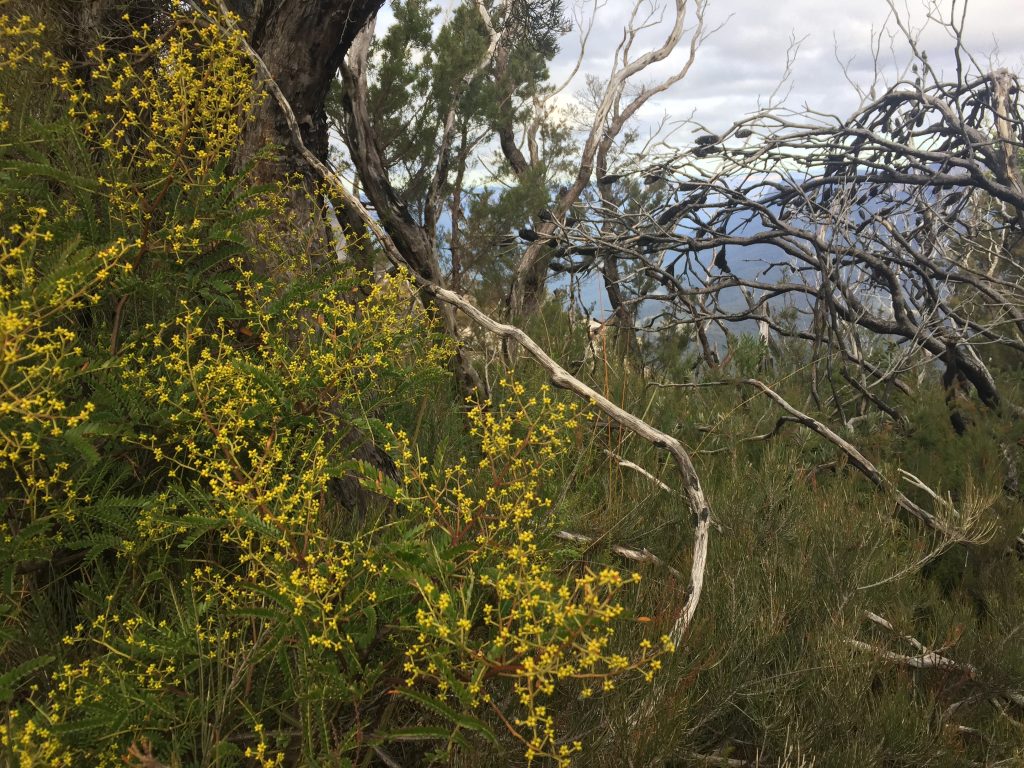 The trail.  Those gleaming stark white Eucalpytus branches in the distance… 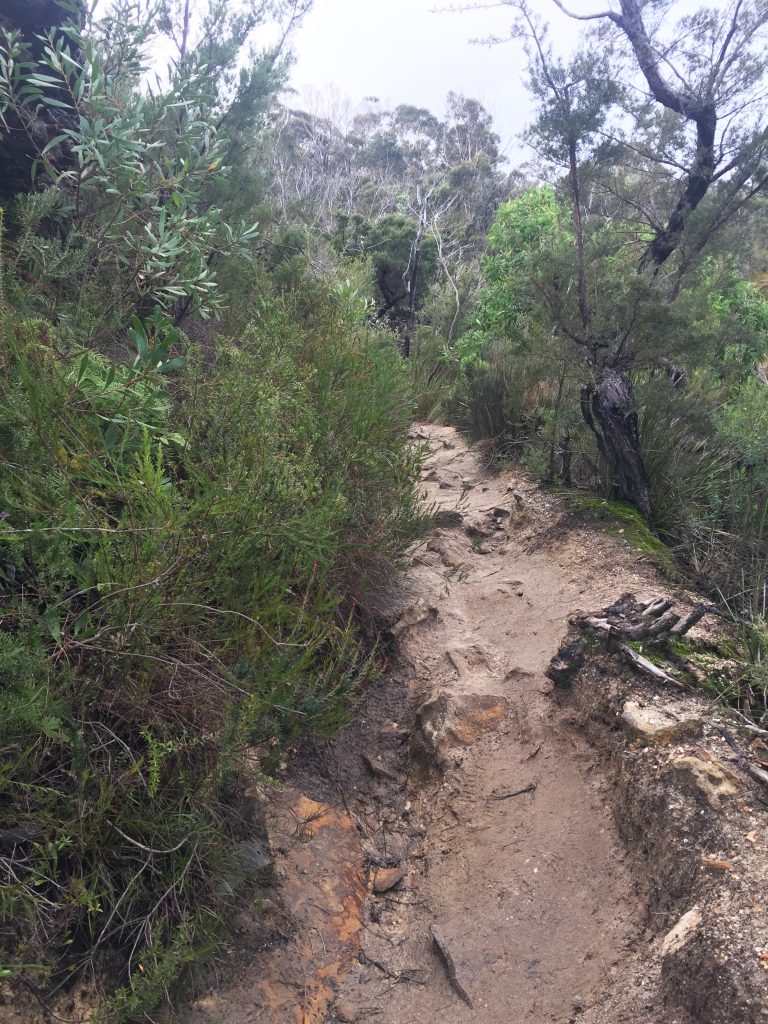 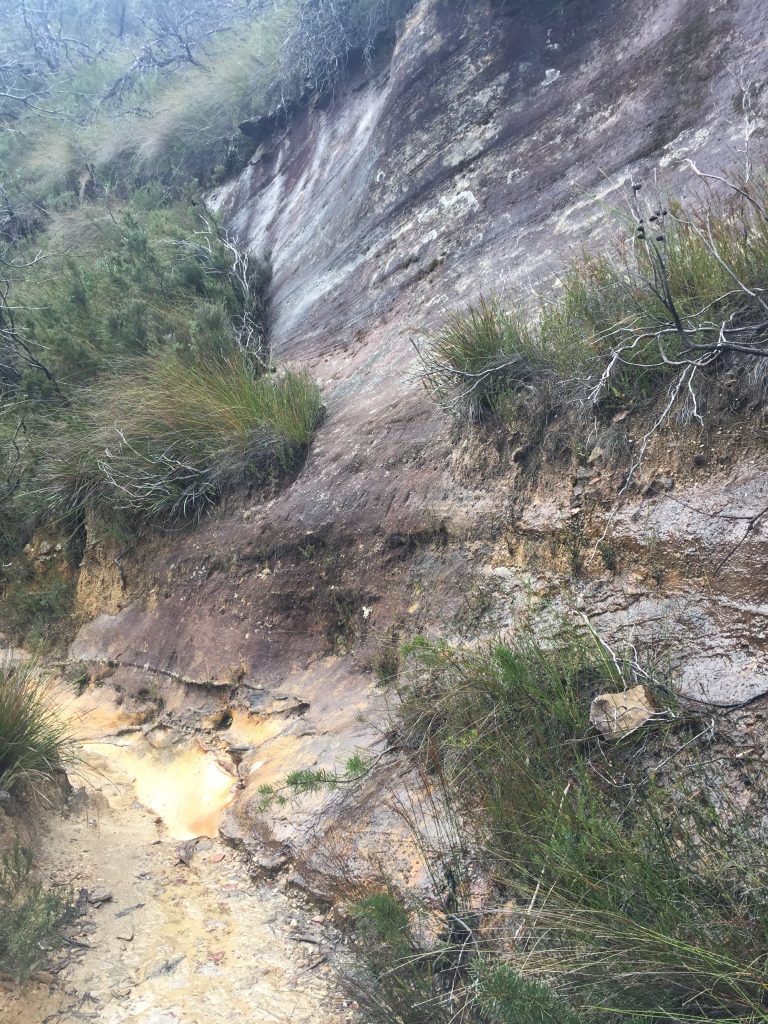 Oh hello, what are you? The thing on left I haven’t figured out.  The smaller on on the right is Dracophyllum secundum. 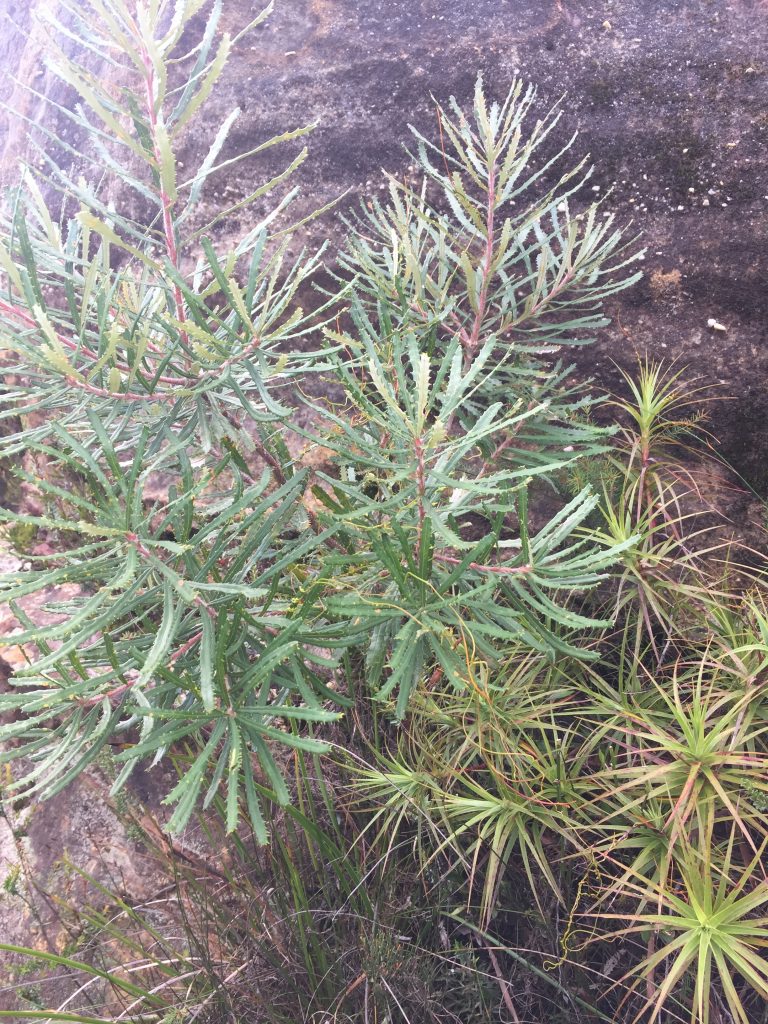 We came to a slot canyon.  Fortunately, there’s a bridge across it! 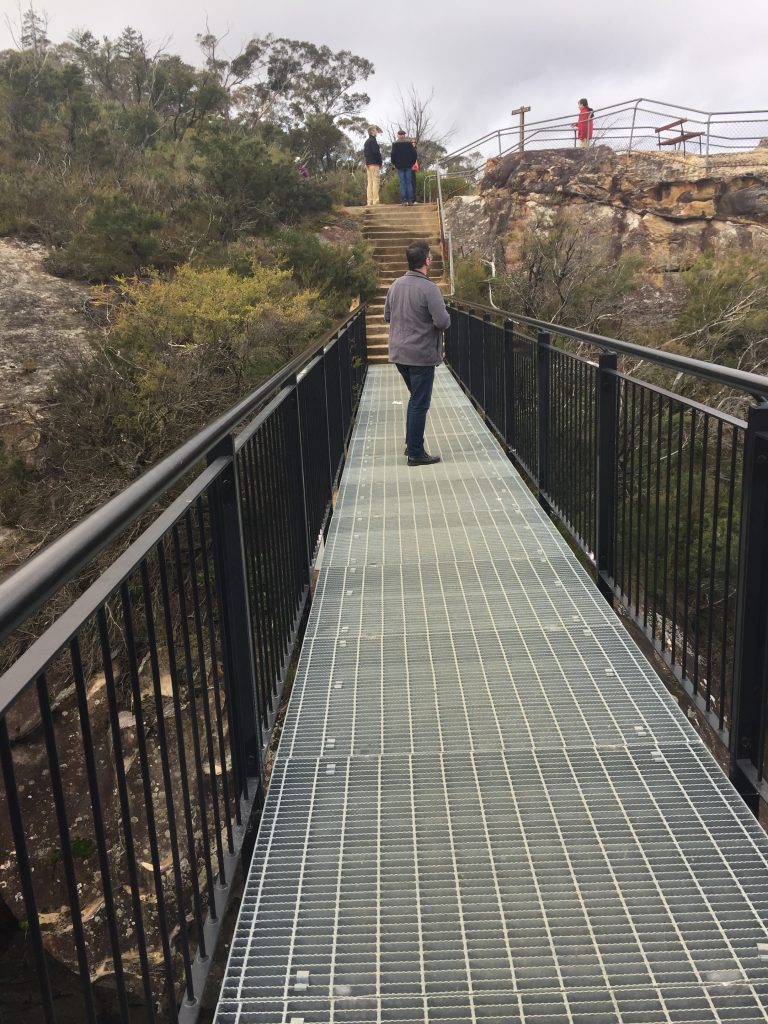 Those are not small trees down there. It goes down maybe 100 feet. 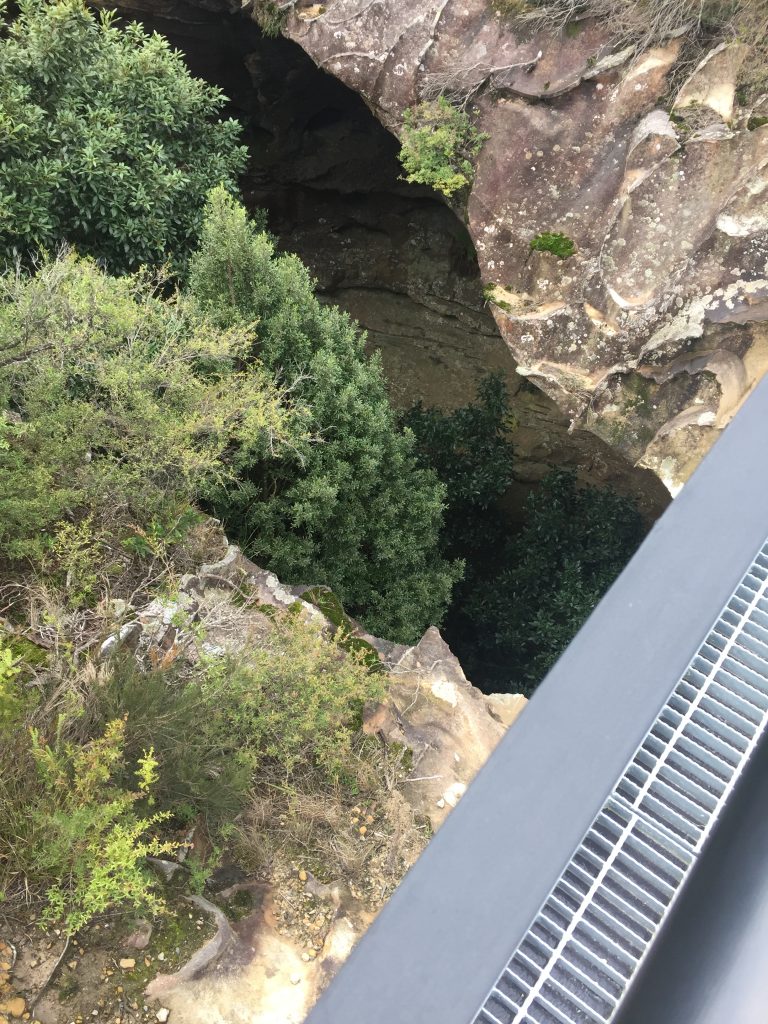 These next two photos are an attempt to get a sense of what this part feels like.  It is quite dense through here. 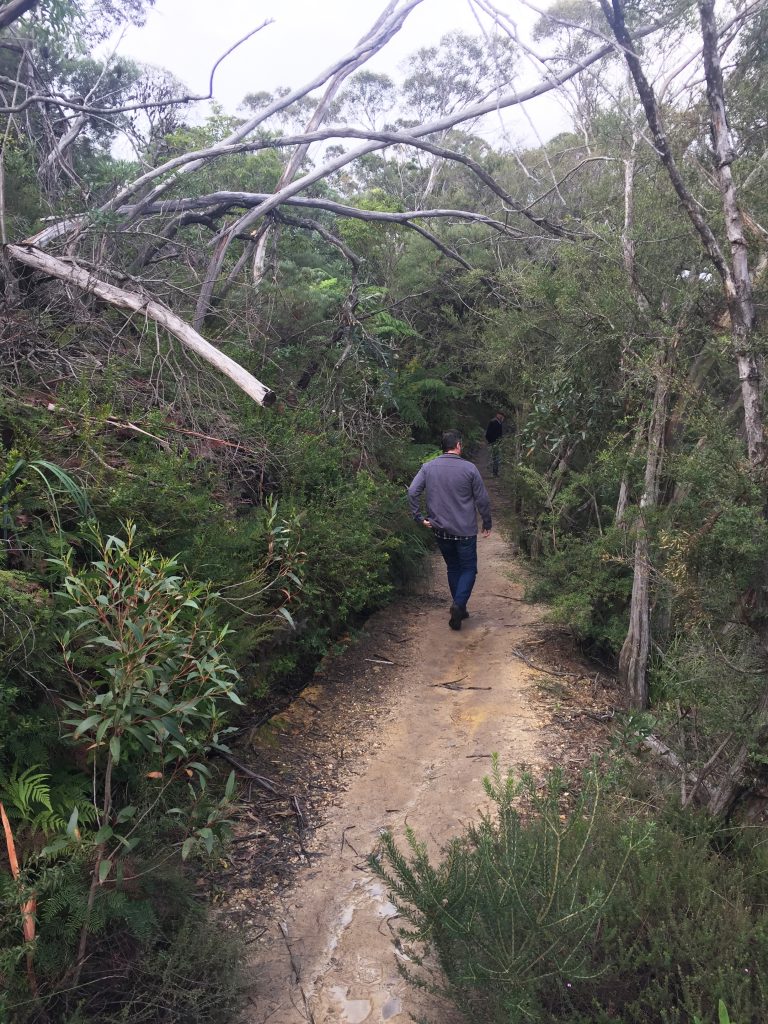 Here’s why they call it “scribbly gum”. Insect larvae do this.  The one on the left is the clearest example where you can see it start out narrower (down lower), and then the trail gets wider as the larvae continues burrowing and eating and growing. 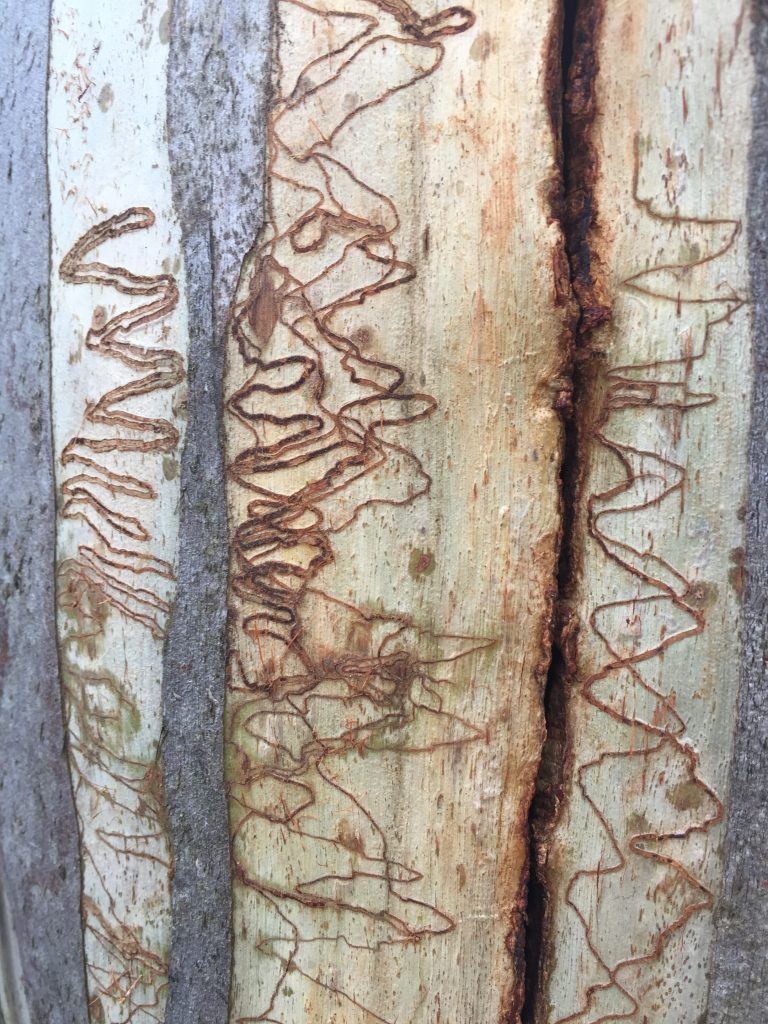 This has got to be Angophora costata. 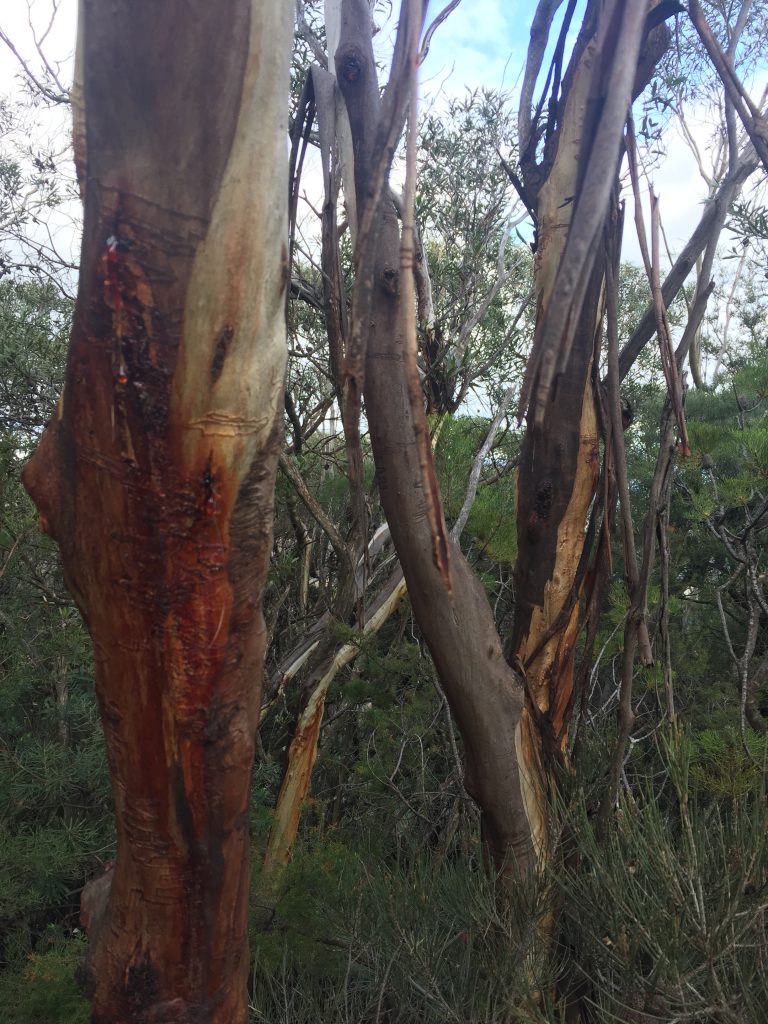 In here somewhere I decided to look at the soil.  It’s almost nothing but sandstone! Very gritty.  My hand looks very pink, probably because it was somewhat cold. 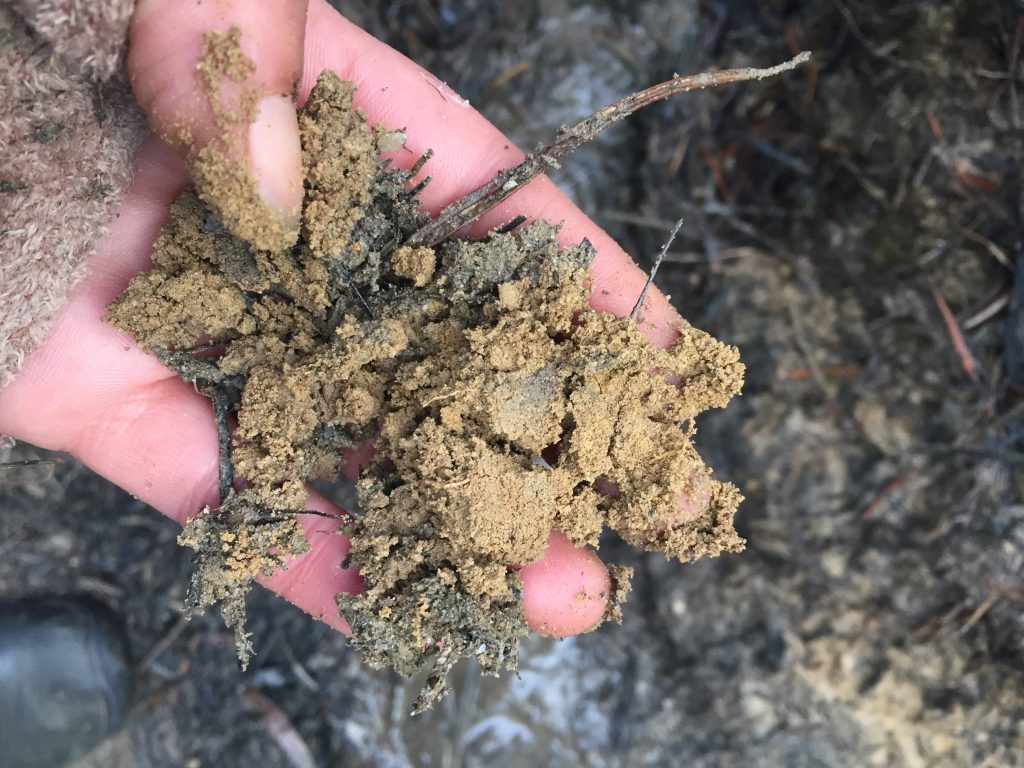 Look at this B. spinulosa flower.  I should say inflorescence.  This species tends to make a very handsome shrub with a denser habit than most Banksias, though this plant was growing in full shade so it had a much more open habit.  Those black hairpins just kill me. 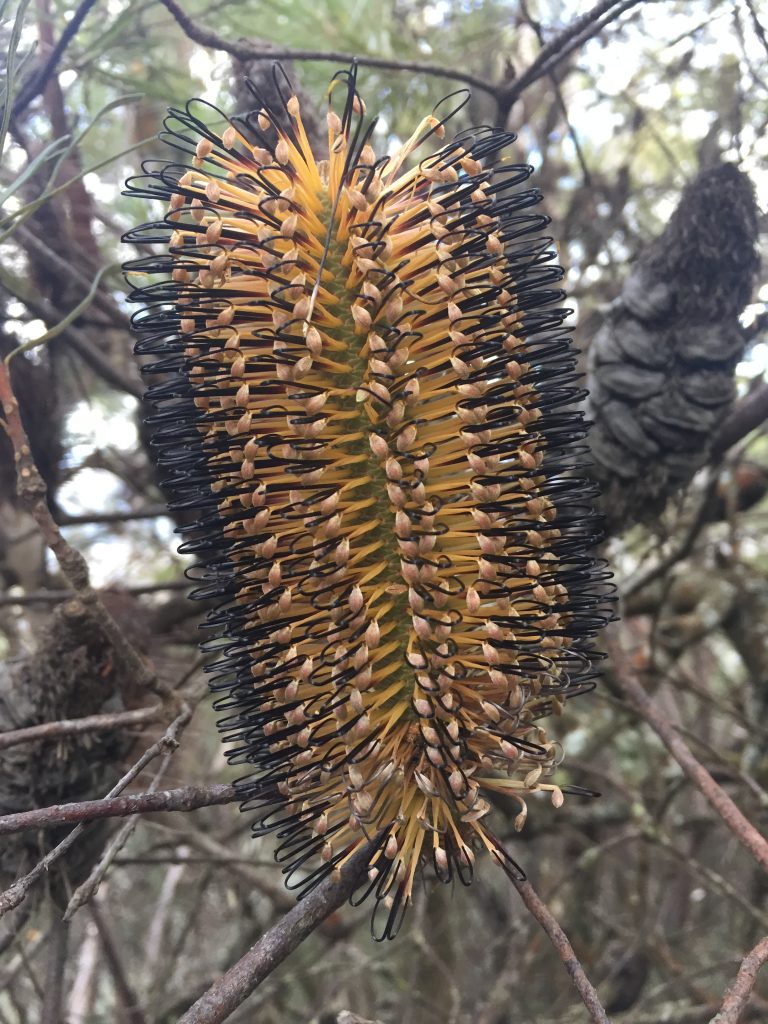 Now in a wetter, closed forest, there was a bank of Blechnum wattsii along the trail.  This one frond in particular stood out.  Note the shreds of Eucalypt bark all over the place. 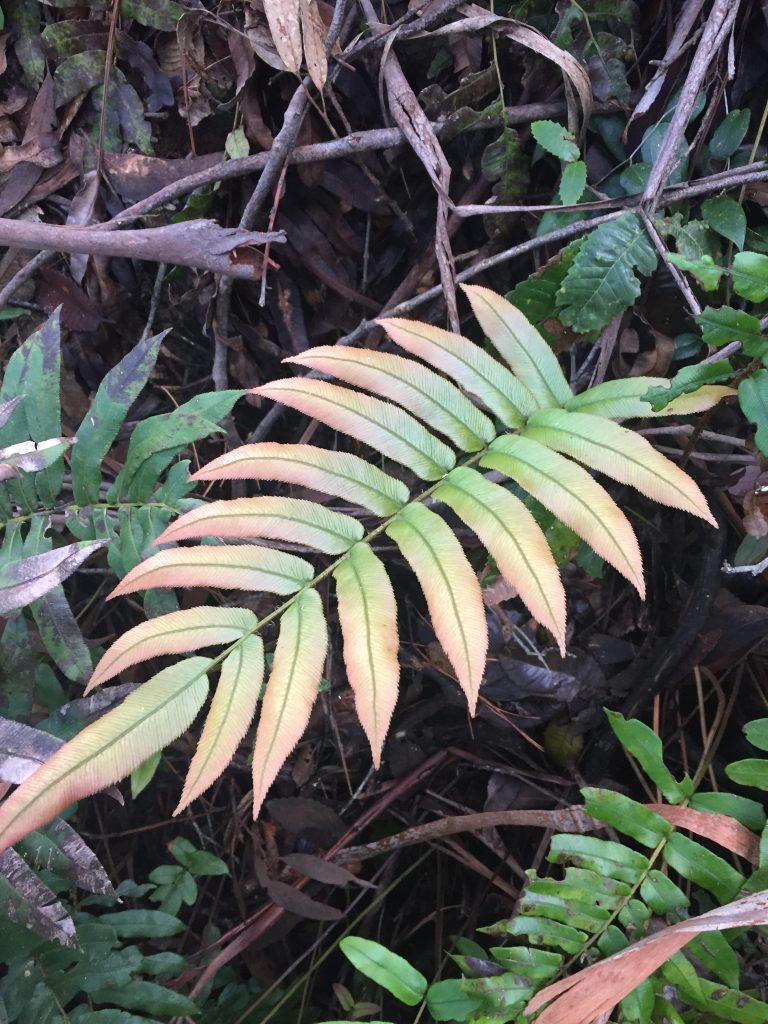 Tasmannia insipida here.  See how much darker, and wetter, and fernier it is down here? This is what it’s like in the bottom of those deep canyons. 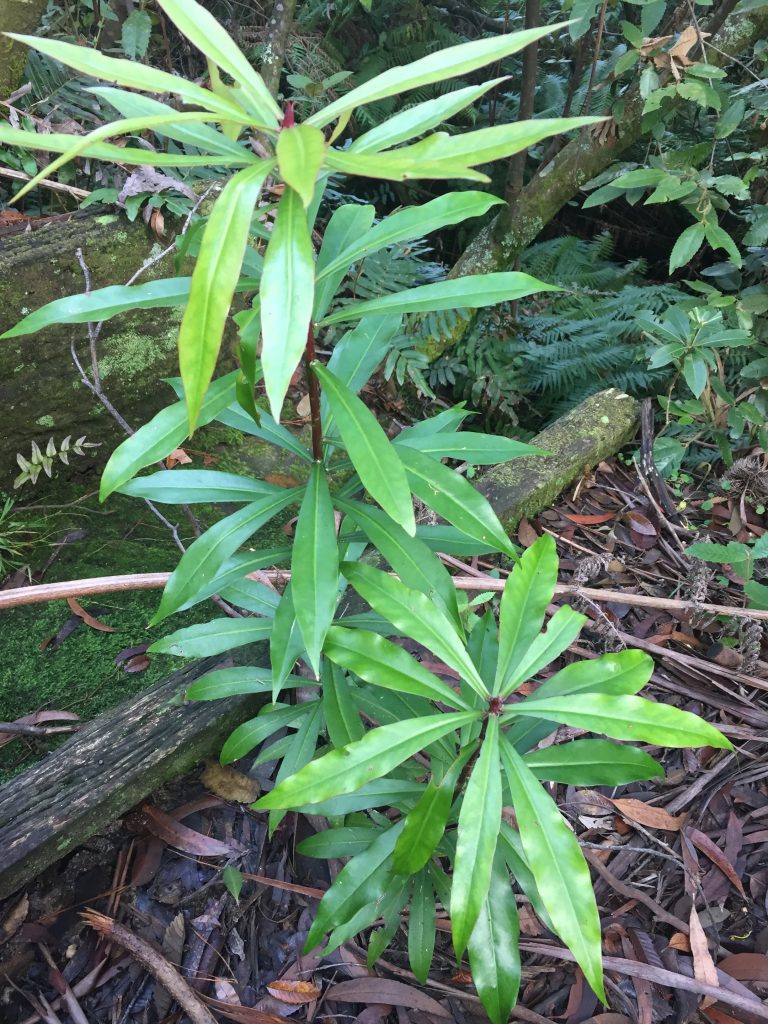 Wish I had taken more photos down there.  I think my phone died.

Back up out of the canyon, next day, here’s one of my favorites! Lambertia formosa, the Mountain Devil.  I failed to photograph the seed pods, which look like little horned monster-heads, but I did bring a couple of them home (ssh!). It’s super-neato flowers start out hot pink with lighter pink ruffly bits at the ends, then they fade to this orange-ish color, then finally they dry out and turn a beautiful rusty burnt sienna color. 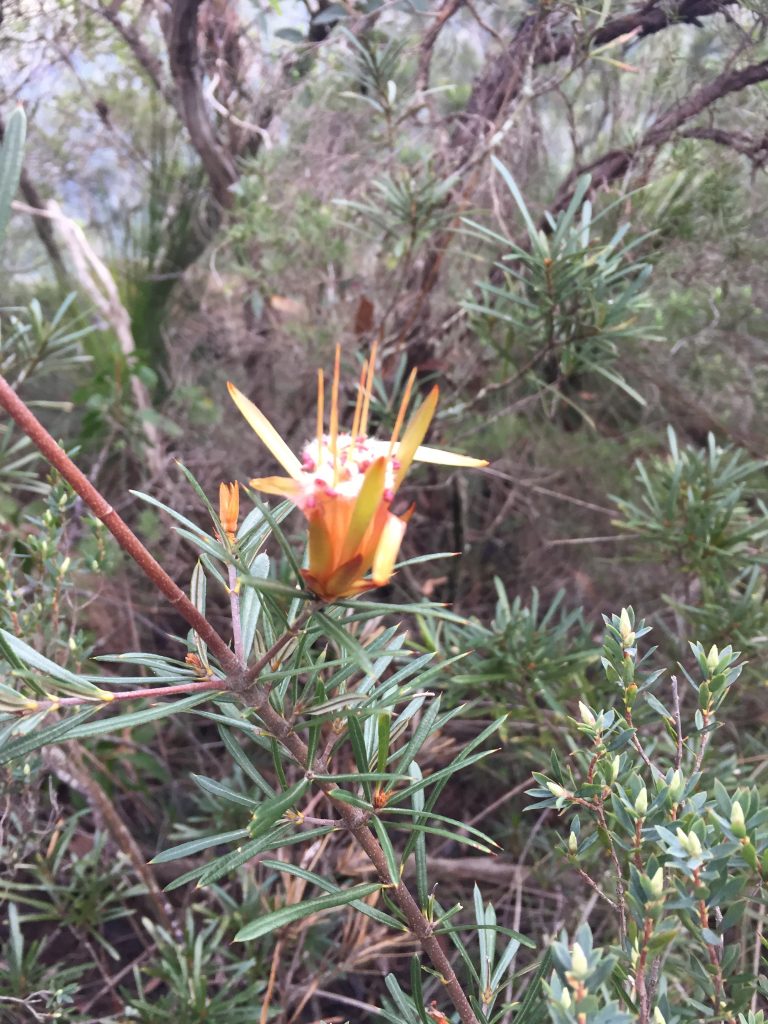 This can be none other than Xanthorrhoea media.  The mullein of the Blue Mountains, in so many ways.  They make a big tall flower spike like mullein, too, 7 or 8 feet tall. 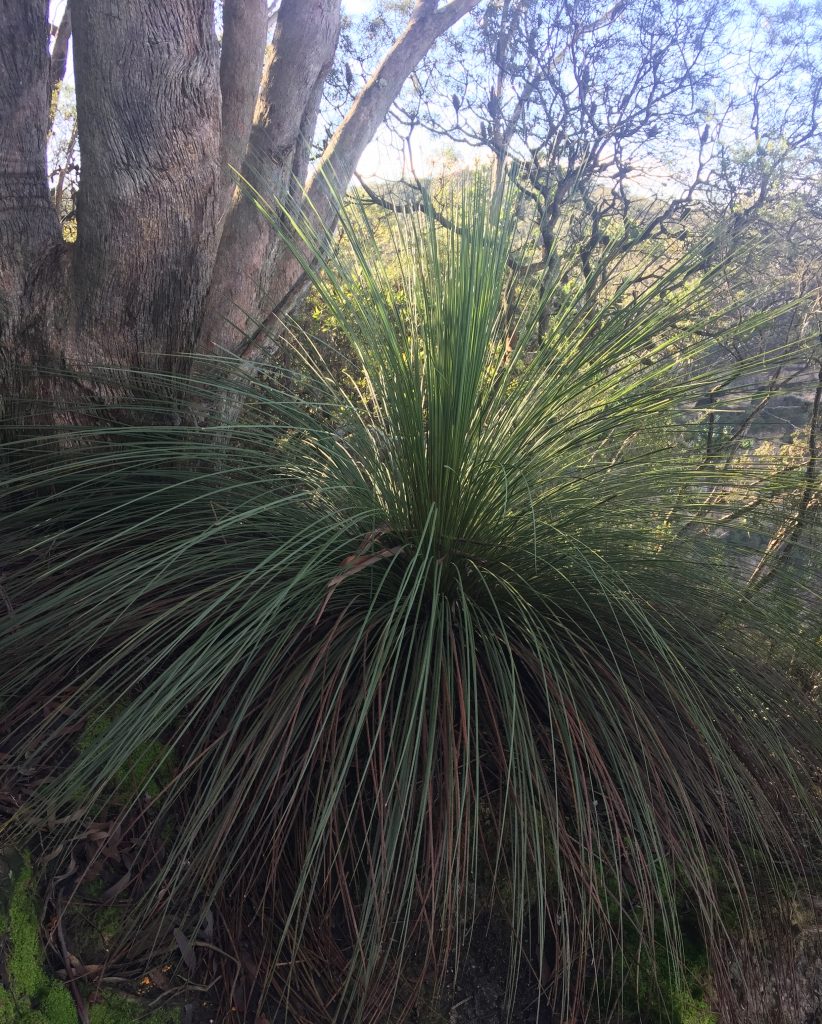 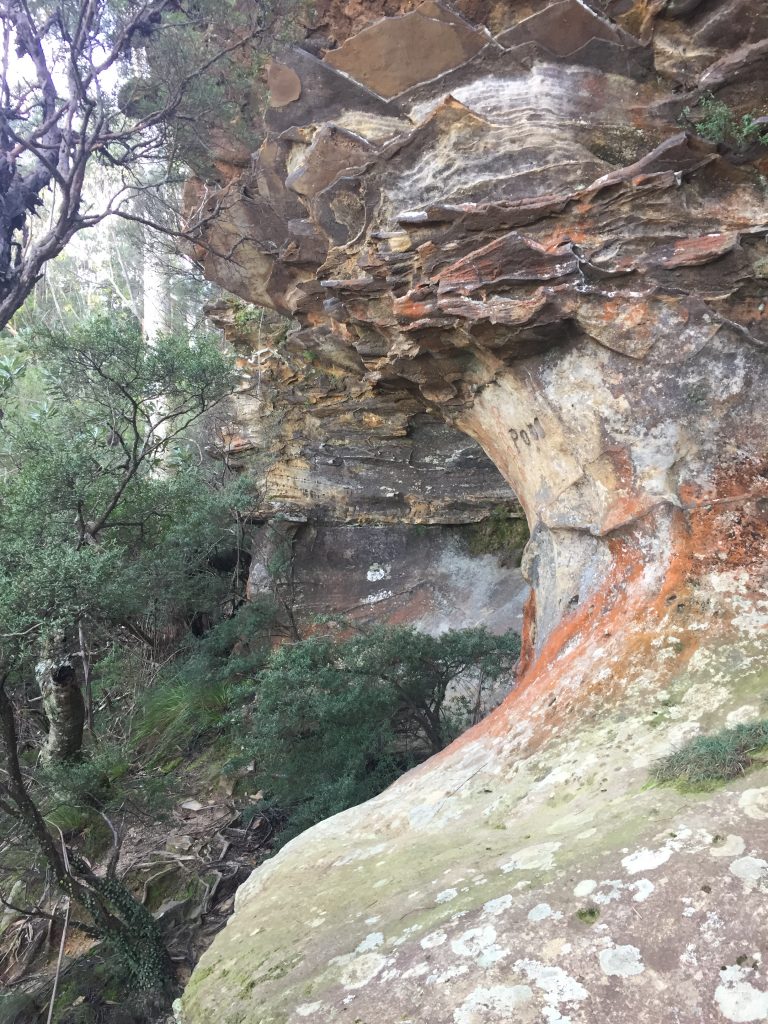 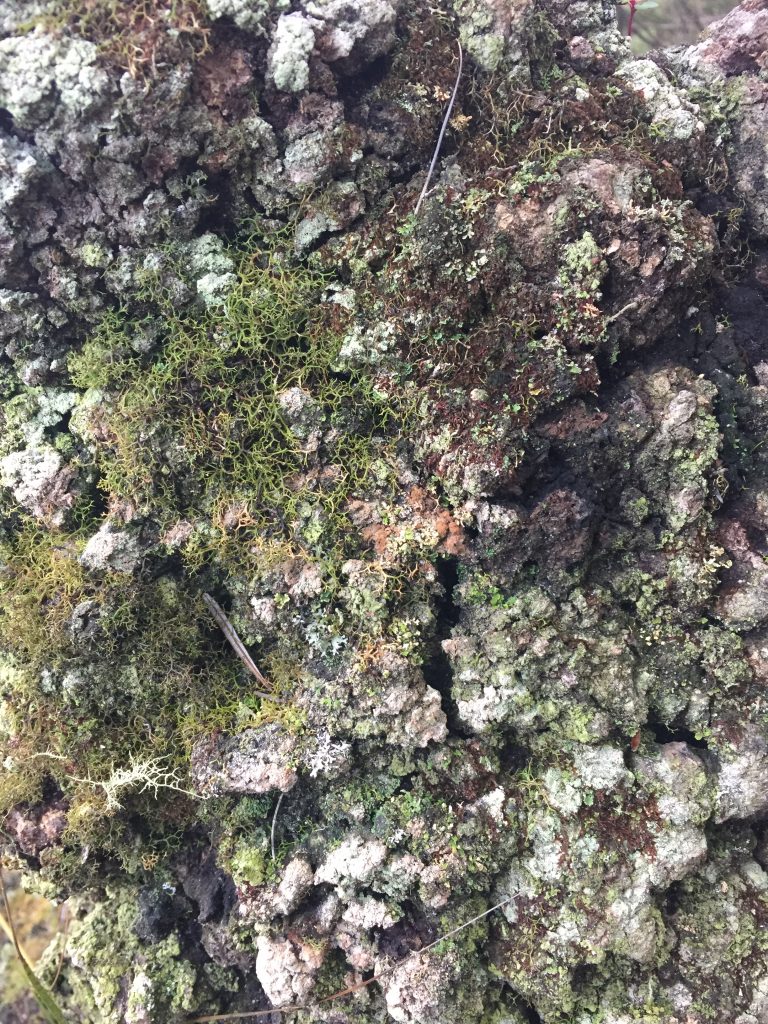 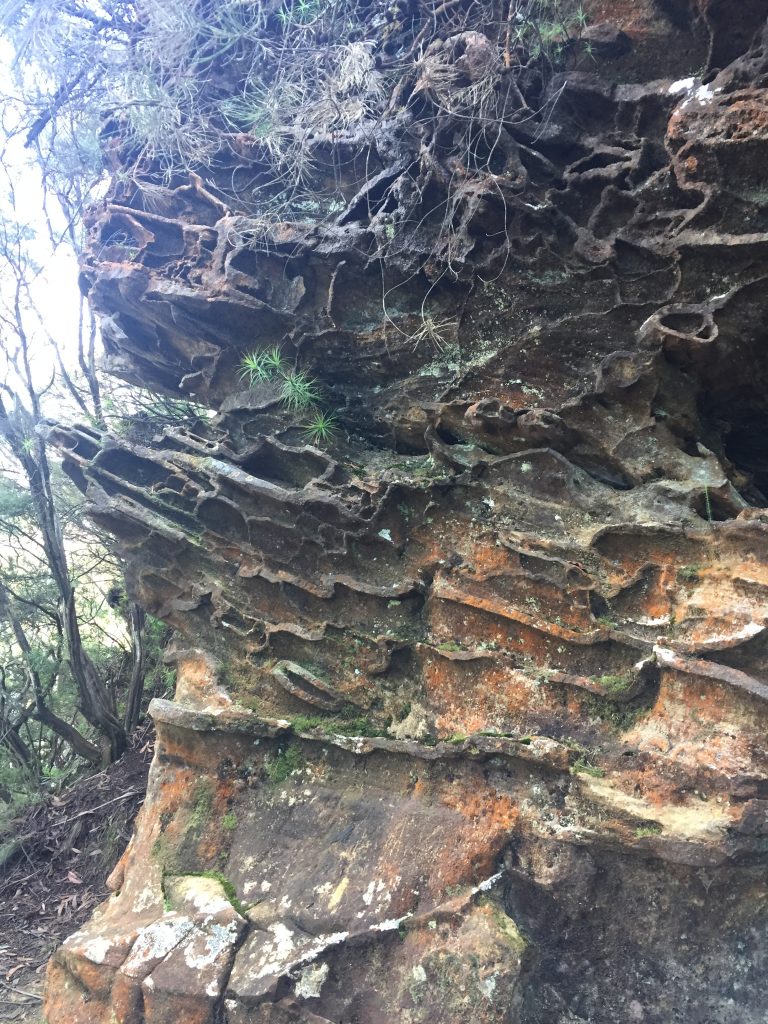 I really love this plant.  Allocasuarina distyla? I’m not sure. 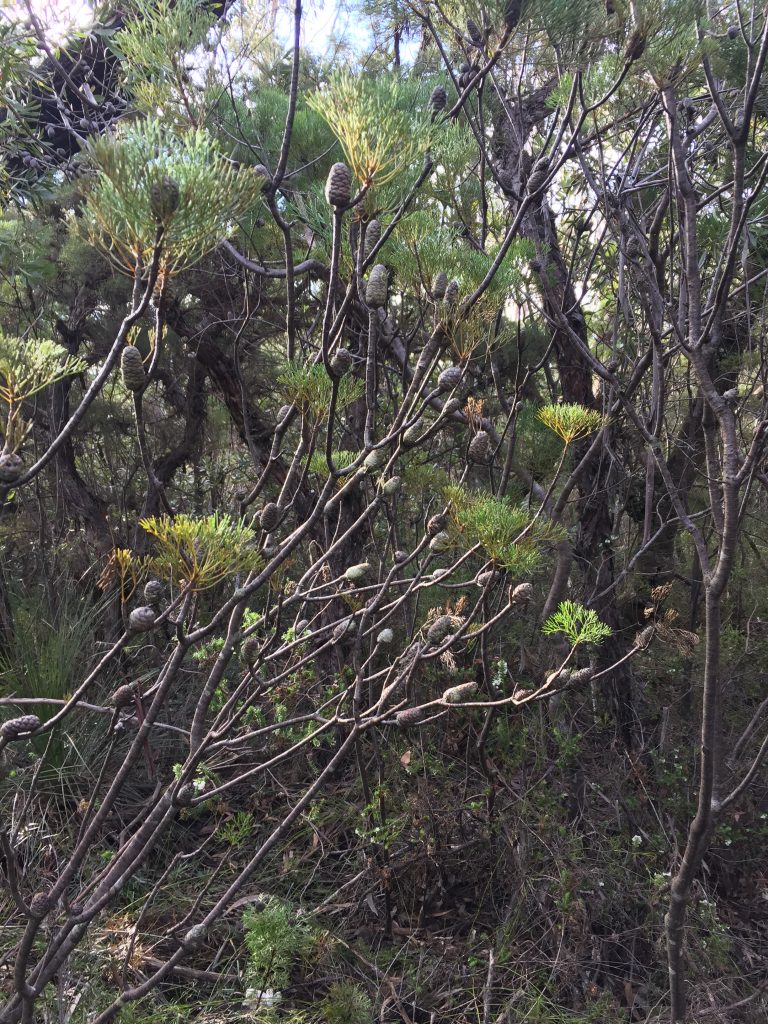 And this is .. I have no idea but isn’t it lovely?  There’s a Banksia out there in the distance, probably B. spinulosa by the habit, and that’s Ross over there on the trail with the hat.  I’ll let this be my parting shot. 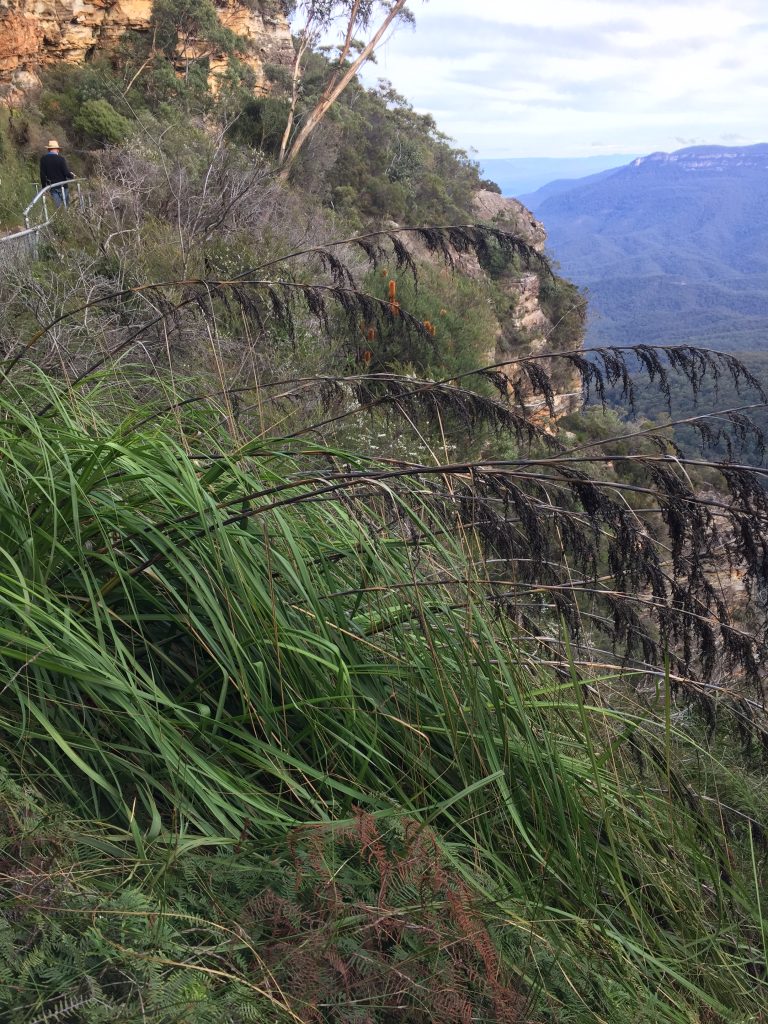 If you got this far, I’m grateful and you’re a plant nerd.  I hope you enjoyed it.