(Of however many parts it takes)

This is my third year gardening at my current house. The first year, the focus was on establishing vegetable gardening beds.  The second year, we did a little more of that, and started the process of eliminating lawn.  Now we have a total of 11 rectangular vegetable beds (4′ x 10′) which are edged with cedar to keep the clover and creepy grass out.  This year the focus is ornamental plants.

When we first moved here, I had “food forest” ideas – for a time, we wanted every single plant to produce something edible.  My, how experience changes things! After living in an apartment building for 10 years with only a tiny garden space, we were delusional in our enthusiasm.  It’s not that we can’t eat all the things that come out of the garden, it’s that we run out of time to prepare and preserve.

Besides, I want to grow cool stuff. So here are a few of the plants that went in the ground today, all front yard.

The idea with the cypress here is to be a color/form contrast to the Japanese maple, which wants to be a blob. This spot was begging me for something light-colored and upright in form.  I tried a Lomatia myricoides first, but it died quickly because I planted it into some imported soil that turned out to be really high in every nutrient – Lomatia, like all members of the family Proteaceae, can’t tolerate excessive phosphorus in the soil.  Hopefully the cypress will enjoy it (and, it’s next to that soil but not exactly in it).

I’ve known for a while that Proteaceae members don’t like extra phosphorus, and presumed this is simply because Australian soils tend to be very low in it.  I came across a very interesting publication that detailed what is actually going on.  Rather than try to distill it, I’ll quote:

Many Proteaceae, including Banksia and Hakea species, but not Embothrium coccineum , are readily killed by phosphorus fertilisation; they are highly sensitive to slightly enhanced soil phosphorus levels. They tend to accumulate phosphorus in their leaves, to concentrations that would be severely toxic to any plant (typically ≥ 1% of the dry mass). However, other plants rarely achieve such high concentrations in their leaves, even when heavily fertilised with phosphorus. That is because most plants reduce their phosphorus-uptake capacity when supplied with high phosphorus concentrations in the soil or nutrient solution. They close the doors through which phosphorus enters the roots when a big crowd of phosphorus molecules is waiting to move in. We discovered that the extreme sensitivity of H. prostrata and other Proteaceae is due to a very low capacity to reduce their phosphorus-uptake systems when elevated phosphorus levels are present in the soil. Some time, during the course of millions of years of evolution on severely phosphorus-impoverished soils, for many Proteaceae this trait disappeared.

Right right, millions of years.  Not gonna undo that, now are we? But wait, there’s more:

Having discovered the physiological cause of the phosphorus sensitivity of some Proteaceae, we made a wider survey of related species. Interestingly, some plants that are closely related to hakeas, e.g. , Grevillea crithmifolia , also belonging to the Proteaceae, do not suffer from phosphorus toxicity, even when exposed to phosphorus levels that are much higher than those that kill some Hakea or Banksia species. This grevillea closes its doors through which phosphorus moves in when supplied with a lot of phosphorus. We have also discovered that these traits apply to various species of South African Proteaceae. Relatively P-insensitive Proteaceae species are typically associated with soils that contain more plan-available phosphorus, e.g. , those derived from more nutrient-rich parent material. The sheer diversity of traits adopted by various Proteaceae from Australia, South America and South Africa offers enormous potential for breeders who are keen to develop new cultivars in the Proteaceae. It should not be too difficult to cross phosphorus insensitivity into new cultivars, which could then be grown without the risk of phosphorus poisoning in our gardens.

Well how do you like that? So now all we need to do is find Proteaceae species that have this door-closing ability that are also cold-tolerant, and breed away.  Great! I’m on it! Just kidding.  Anyway I thought it was interesting, and it does give me some hope that someone someday will come up with a P-tolerant river lomatia.

A couple of manzanitas:

By the way, the stakes on this manzanita and the cypress are because I tend to try to wash all the container medium off the roots (or most of it anyway) for two reasons: one, roots almost always end up getting all twisted and tangled, which just goes with the territory of container life.  I like to spread them out like a fan when planting, rather than digging a deep hole and having them all go down-ish.  Reason two is that I want the plant to have native soil around all its roots.  Too many times I’ve found weird pockets of some kind of peat-and-perlite in the ground, the size of some poor plant’s pot, where the plant was long dead because the peat got hydrophobic and the plant never got a chance to move its roots into the surrounding soil… I hate that. Anyway when you spread roots out like a fan, generally they’ll need a stake for a while.

This is out front by the street, an area which is supposed to be a no-summer-water zone.  I’m curious to see how this Amsonia handles it.  The plant with green leaves on the left is indeed a calla, one with shockingly black flowers that came with the house, and it does quite well, believe it or not.  I’ll move the Amsonia if I have to, I just liked this texture for this spot.

Have you ever bought a plant and almost immediately realized you should have bought three of them? This is one of those, for me.  I love this plant and I’d like to repeat it a few times.

I am really looking forward to seeing this thing make a bunch of gatorade-colored bottlebrush flowers against the house.  By the way can you guess what my favorite plant nursery is?

Now let’s go out to the hot/dry zone, by the street.  My favorite area…

I picked up 4 of these cuties a few weeks ago because they were absolutely irresistible. I already had some right here by the curb and the’re really happy and don’t care about moles, so I’m just going to sort of line the curb with them.  They are rather shocking in flower, in a good way. This next one is my favorite.

As I was planting these, I started noticing that there is an awful lot of silvery-blue foliage happening in my front yard and I LOVE IT.  So I took some pictures of that.

Lest you forget I am one of those front-yard vegetable gardeners.  This is probably my favorite cabbage right now.  I start these from seed indoors in June, set them out in August, and they mature January-March.  Although last year we had one that got really huge and we ended up harvesting it in July – I think that was because I started them too late, in July rather than June, and it didn’t get enough growing done before the winter to mature in the cool months.  The result was a somewhat bitter taste, so it went into the slow cooker rather than becoming slaw or salad.

My neighbor’s Liriodendron is a great tree.  Gives us many leaves and nice things to look at, like this.

Lastly, I felt the need to record what Hamamelis x intermedia ‘Jelena’ is doing.  I have wanted one of these, specifically this cultivar, for a very long time and when I was up at Cistus in May of this year, I think it was the day after my birthday, I found one with a really nice tall, open, arching form.  It’s 8′ tall now.  I’d show you the whole tree but it’s sunny now so absolutely impossible to photograph.  And it was super windy this morning, which also makes for challenging photgraphy! Anyway, the point is the leaf color: 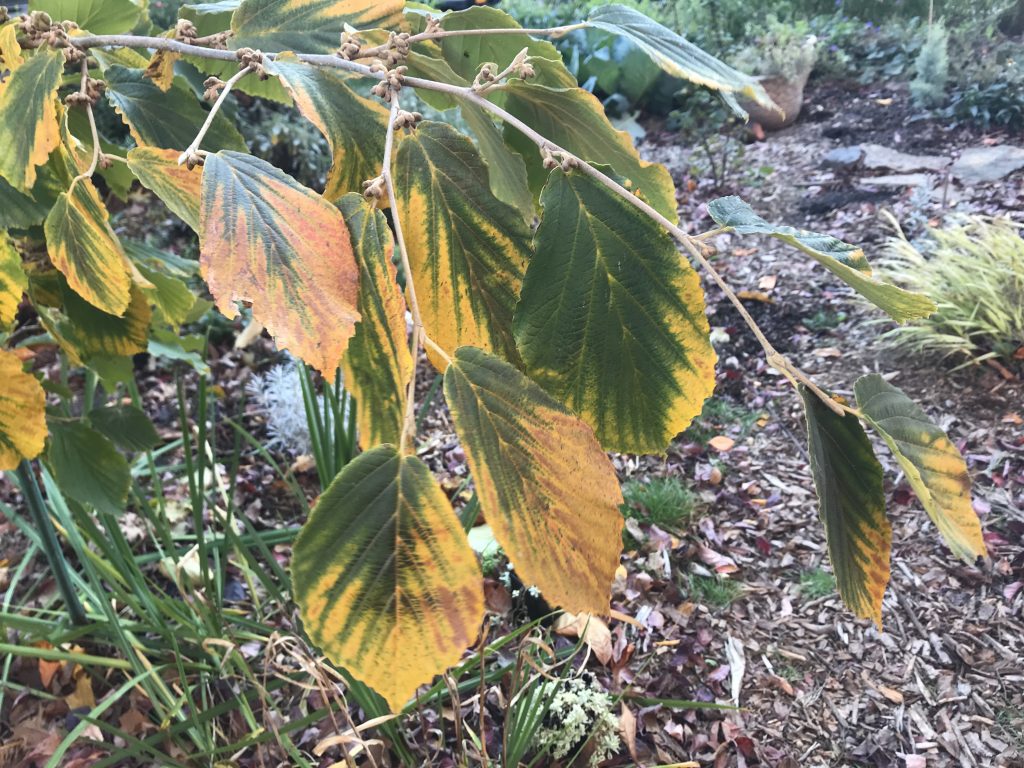 Weird, no? This tree had a lot of mole activity around/under it this year, and of course I filled in those mole tunnels with that same super-rich soil that killed the Lomatia.  I wonder if that is why the leaf color is still so very green?

That’s all the pictures I took but I planted a lot more stuff, including:

Happy fall planting! The weather is off-the-charts awesome for it.