Frankly, most of my backyard is sort of painful to me at the moment.  I’ll show you some of it and try to explain what my goals are for these areas.  Then in a couple of years or so we can come back to this post and feel like something good has happened, I hope…

First let me give you a sense of the layout.  My super awesome stepdad did a really cool thing for me when we first moved in to this house: he drew up a to-scale plan of the backyard, and gave me a roll of flimsy so I could map and re-map the garden each year.  So here’s this year’s map, more or less: 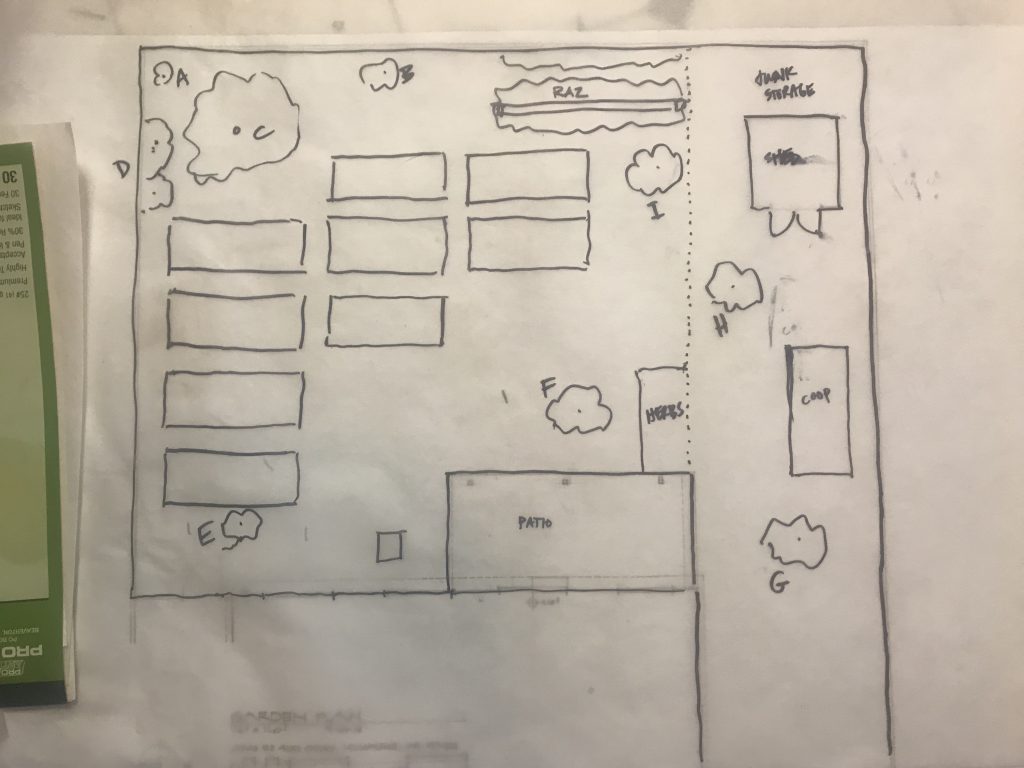 I did make a little key of existing permanent plants (at least I don’t *think* I’m going to move any of these anytime soon):

A – Eucryphia ‘Nymansay’ planted 7/2017
B – Acca sellowiana planted 10/2017
C – Clerodendrum trichotomum was there when we moved in
D – a couple of berry bushes.  One is Jostaberry which I’d like to keep there, the other is a native blackcap (Rubus leucodermis) that I’d like to keep but might not, because it’s really brambley
E – Quercus hypoleucoides planted 9/2017
F – Lagerstroemia ‘Natchez’ planted 10/2017
G – Pear, red Anjou, semi-dwarf, planted 3/2017
H – Chocolate Persimmon planted 3/2017
I – Pear, Flemish Beauty, full dwarf, planted 3/2017

By the way this whole yard was just lawn grass pretty much when we got here.  There was a scraggly butterfly bush against the east/back fence, a very young and frighteningly fast-growing ponderosa pine right behind the Clerodendrum, and a pair of ailing rhododendrons right up against the back of the house to the left of the patio.  Those have all been removed.

The first thing we did was establish all those rectangular vegetable beds.  I completely or mostly ignored everything else for the first couple years.  As you can see by the planting dates above, this year has been the beginning of anything to do with trees and woody shrubs.

Here’s a photo from May of 2016.  Note all the barriers.  I hate that look but the zooming of the dog necessitates it.

So here’s what’s painful: I have come to realize that I can’t stand looking at this fence anymore.  Photo from today:

So that’s why I planted that Acca there, which you can sort of make out to the right of/behind the largest cauliflower plant.  I have three or four additional plants that I want to put along this fence with it.  Those two in pots at right are up for consideration; one is a Callicarpa and the other is a Leptospermum. I’m undecided still, and there are others in the running as well.

By the way that largest cauliflower plant there? I have to take a moment to geek out over that plant. OMG I love it. It is 15 months old and has not flowered.  I think maybe it will in early spring.  I don’t care — I think it’s just a gorgeous plant.  Maybe I should plant a hedge of these! Ha! No seriously, it’s worth considering using them in the landscape if they’re going to be like this.  They can get by without supplemental water in the summer if they’re mature enough, they do like rich soil but don’t absolutely require it, and if they flower, you can just eat that and let the plant keep going.  They’ll resprout from the stem if you cut them off at ground level.  And near as I can tell they’re absolutely perennial.

I guess it’s not ALL painful back here.  But wait, it does get worse…

The above picture is what it looks like when you walk out the back door onto the patio and look left, which is north.  There is just NOTHING good happening here.  The rain barrel is the most obvious eyesore and I really don’t know what I want to do with it.  Are these even useful at all in this climate? I’m doubting that.  I think at the very least, I’ll move it around to the north side of the house so it’s invisible.  We also haven’t yet finished painting the house – this is the original color.  The dark color you might have seen in other posts is the new color and we ran out of time before the rain came.  Ugh.

The white trellis thing somehow ended up there – it was one of three of these that were attached to the patio roof support posts.  We had no love for them so they got removed and this one was probably being used as a dog-fence-garden-protector over there.  This is reminding me I need to deal with it in a better way.

To the right of the rain barrel, toward the fence from the hydrangea, is Quercus hypoleucoides.  Ok, it’s the one good thing.  You can barely see it in the photo above, so here:

As you can imagine, this is going to really change this scene eventually.  Q. hypoleucoides is an evergreen oak which will eventually get to 30 feet or so (reports vary considerably).  I planted this here because I absolutely LOVE it but also because I want it to obscure my view of my neighbor’s house (and his mine, why not?), to provide afternoon shade for the part of the garden to the east of the oak, and because I love the little willow-esque brown leaves it drops on the ground year-round, and the bright shade underneath that is due to the white undersides of the leaves. There are several 10-year-old specimens around a very interesting parking lot on NW Vaughn between 19th and 20th.  Another, about 20 years old, lives at approximately 915 N Shaver, and someone has a couple more in their amazing garden on NE 11th just north of Knott.  I looked at all of these (and looked on Google maps street view over the years) before selecting this tree.  I love all of these trees in all stages of growth that I’ve seen.  This plant was recommended initially to me by James Wilson of Garden Stories.  I bought it from Xera Plants this summer.

The Hydrangea quercifolia came with the house, as did two large rhododendrons that used to be right on top of it; you can almost see where they were by the way this thing has grown – we removed them this summer because for a location so prominent, they were not the right plants.  Big, coarse, dark leaves, tons of lace bugs and aphids, messy after flowering, very short season of interest… it feels very bare without them, and I miss having plants here, but I don’t miss the rhodies themselves.  Of course, they were also hiding all these atrocities, like the AC unit and the cat shelves and the rain barrel.

Speaking of the AC unit that’s actually the hands-down worst thing going on here.  It’s LOUD and I HATE IT but Certain People really can’t tolerate heat, so I have to live with it.

Speaking of that fence, here’s another pain point.  In the following photo I’m standing near the oak, looking east toward the Clerodendrum:

For the last three years I’ve grown squashes and things on this fence, and I rather like the look of it in summer, but I’ve finally decided I’d rather give that up and have a mostly evergreen hedge-border type of thing here.  That means that eventually I’ll have to shorten these vegetable beds to make room.  I’m fine with that.  I’m actually fine with completely rethinking the whole layout of vegetable beds.  Anyway, I’ll start with a couple of Leptos along here (actually you can see them in their pots with their white tags; they came from Xera Plants as well), and go from there.  The further-away one is L. lanigerum and I’m hoping it’ll provide some afternoon shade for that Jostaberry which needs it, and at the same time be a nice focal point in that spot.

I think about focal points a lot.  And what tends to happen is I get too focused on them and end up not being able to decide how to handle them.  The result is that of all the main focal points that exist back here from the patio vantage point (a total of maybe 5), there is only ONE that has a suitable plant in it, and that’s the Acca.  So I have some decision-making to do! And please feel free to make suggestions! No really.  I need help here.

The more I think about this, the more I want to change the rectangular vegetable bed arrangement.  That’s going to be a lot of work.  But more and more I’m yearning for a garden that is nicer to be in, rather than just do the hyper-productive edible garden thing.  Let this post be the first, in what will probably be a long process… Thanks in advance for hanging in there with me.