We’ve all had these situations where a special plant almost dies, and then … something happens… and you get soooo very excited, it feels like falling in love again and to borrow a phrase from a favorite friend, you love the thing so much it makes your teeth hurt.

This happened years ago with my lime tree.  It completely defoliated one winter; I had a lot of shit going on in my life and we also had to move out of the apartment building we’d been living in for a decade.  It was early April; no leaves.  I put the plant outside (earlier than normal; had no choice), and left it to die, or not die.  We proceeded with the moving process and after we finished, maybe 10 days later, I came back and checked on the tree.  GUESS WHAT! It had a ton of tiny little purple baby leaves.  I was amazed, so relieved, and so happy.

Here’s the lime, a year and a half after that episode, looking wonderful:

So this is now (I think I hope) happening with my lemon that I just got this summer from Four Winds Growers, which is the same place I got the lime tree from maybe 10 years ago.  The lemon arrived in good shape with about 5 fruits on it.  I wasn’t thinking about what its growing conditions might have been at the nursery, so I just put it outside, middle of August, heat waves and all.  I should have hardened it off more carefully, but I didn’t even think.

Here’s the lemon on September 2, about 2 weeks after it arrived:

But unfortunately it really went downhill from there.  It started to get yellow leaves, here and there at first, but then more and more.  The citrus cognoscenti highly recommend a potting mix of what they call 5-1-1.  It’s 5 parts fairly coarse bark, 1 part perlite, and 1 part peat-based regular potting soil.  I made a mix that was more like 5-1-2, because I wanted a little bit more moisture-holding capacity as my citrus plants do spend the whole frost-free season outdoors.  I repotted it into this mix, and it was still looking more or less okay when I first brought it in, albeit more chlorotic.

In the pic above, see that little poof of new leaves over on the right side of the lemon? That’s about all that was left; nearly ALL the other leaves have fallen off in the last month since the above picture was taken.

Do you see, on the branch closest to the bottom of the picture here? I’m not great at super close-ups but let me try: 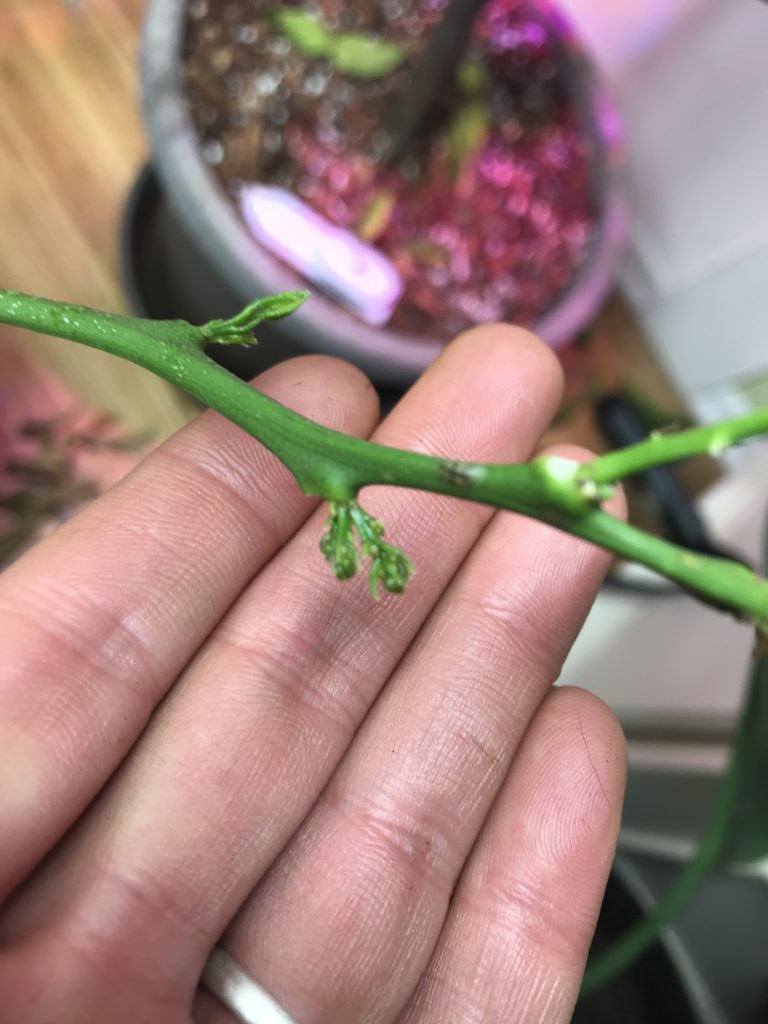 Tiny beginnings of new leaves! And yes that’s an ant trap in the pot in the background.  And a scale insect on the lemon, which I only noticed after looking at this picture; that got removed along with several others.  But you guys, this little lemon is covered with tiny leafy bits like this.  Some seem like they might be flowers which I’m not thrilled about, but whatever.

I am very hopeful but also still prepared for disappointment if we have to go that way.

Meanwhile, there are other cool things happening in the indoor grow room.  The pepper I brought in is really thriving and keeps making fruit. Ha!

And Hibiscus shizopetalus keeps giving me these … I’ve never been a big hibiscus fan but this just does not suck, though they only last a day:

And there’s a caterpillar in here which is eating the leaves of the pepper, the Pelargoniums, and African violets.   I find that somehow humorous though I have no idea why.  I guess it’s just funny to me to see insect predation on African violets.  Sure, here’s a pic:

See the round holes on the Saintpaulia and the peppers? As I was taking this photo just now I was composing the last line of this post in my head, which was to read, “The pepper and the Pelargonium here are both big plants and I’m never going to find this caterpillar, but that’s okay because they’re all growing quite well and can tolerate a bit of predation.  I’ll just let the thing chew away.”

But then I found it.