Specifically, the succulent garden, which was among the largest by area of the “themed” sections.  Danger Garden, this is for you.

The entire succulent garden is in raised beds and large planters made of what appears to be Cor-Ten steel or similar. That dark rusty color of course does wonders for the lovely silvery blues of agaves and cacti as well as bright orange aloe flowers.  Sydney has a humid subtropical climate and gets probably 50 inches of rain a year, so this seems like a good idea.

In the above photo with the big flower spike is Agave attenuata, an extremely common sight all around Sydney, more common than Yucca is here.  They practically grow in sidewalk cracks — or they would if they could fit! Here’s a grouping of them, along with what I think is A. americana.  This is along a street behind someone’s backyard fence, in what appeared to be an untended area:

While A. attenuata dominates the Sydney agave scene, others do pop up here and there.  This next picture looks like a couple different species, the largest possibly A. flexispina?  I found this just walking around Bondi: 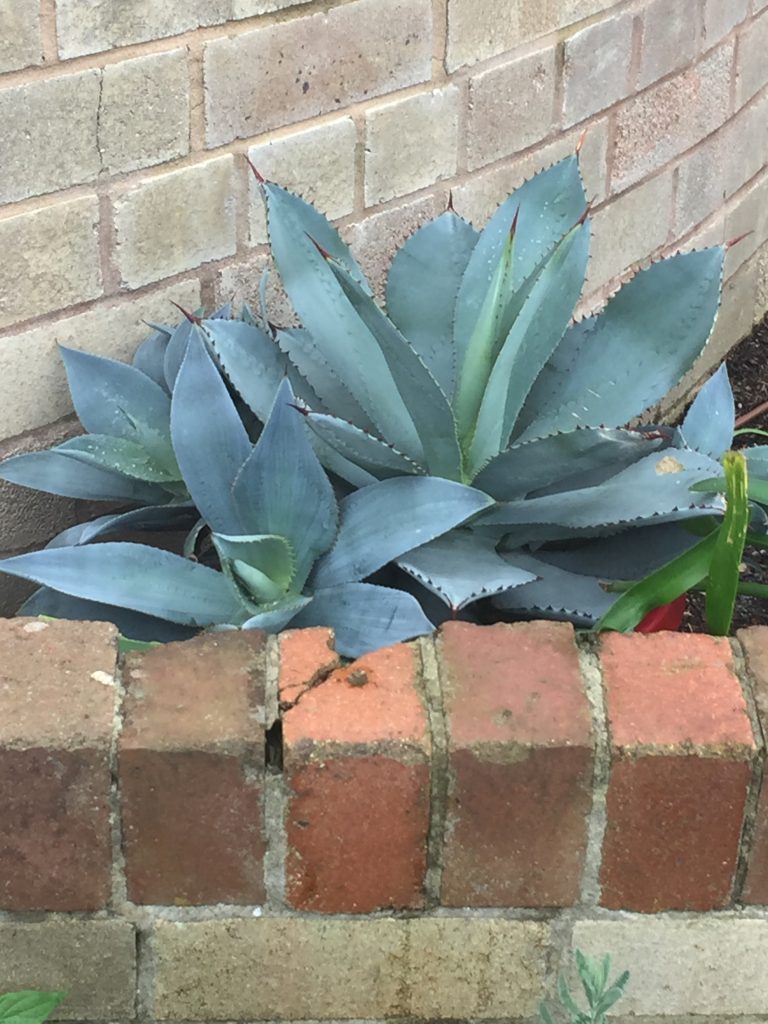 One more, while we’re out and about, then we’ll go back to the botanic garden.  This thing is probably 10-12 feet tall at the highest point:

Ok back to the garden.  Even in this less-than-amazing iPhone photo, look how all the blue stuff just glows in front of that weathered steel wall!

This one let me get closer:

I love how these guys are totally falling over with the weight of all their little keikis: 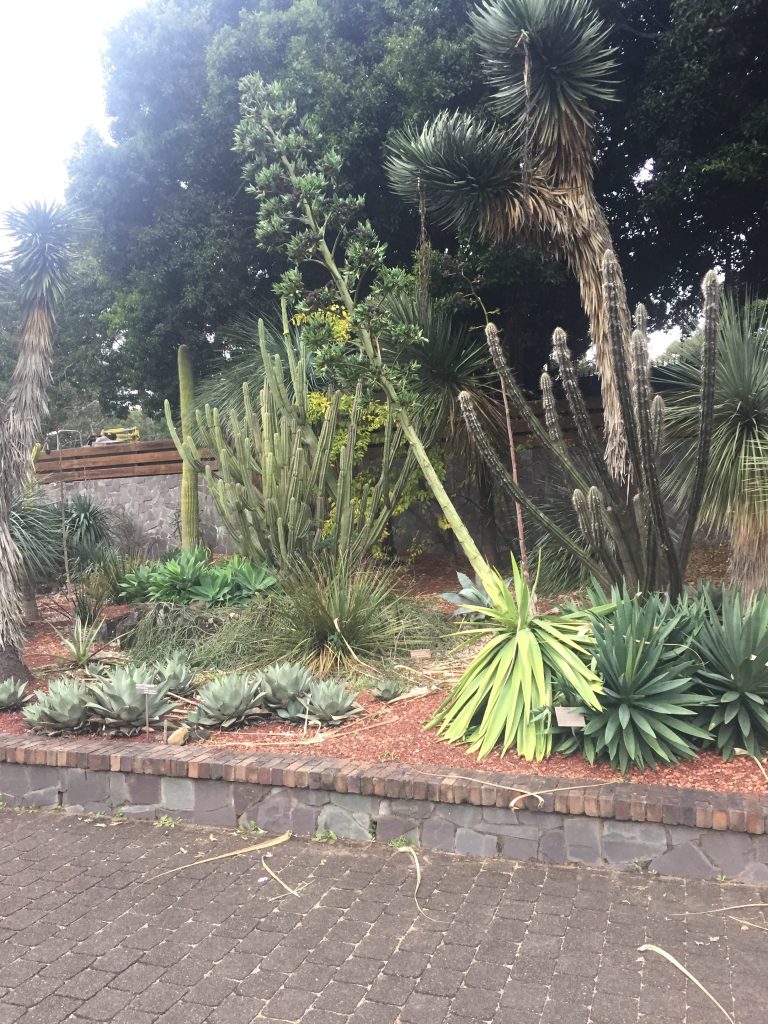 What do you suppose was going on in my mind that prevented me from taking a picture of the tags in the photo above? I mean, in a lot of cases the tags were nowhere to be seen, but I suspect that here, I probably thought, “I can never grow that so I don’t care” or similar.  Sigh.

I DID focus on the spikey bois on the left, though!

LOTS of these here.  In fact, if you do a Google image search for Agave flexispina, I’ll bet a third of the images are of the plants here.  You can tell by that red rock, which is used throughout the succulent garden.

I don’t know what this guy is: 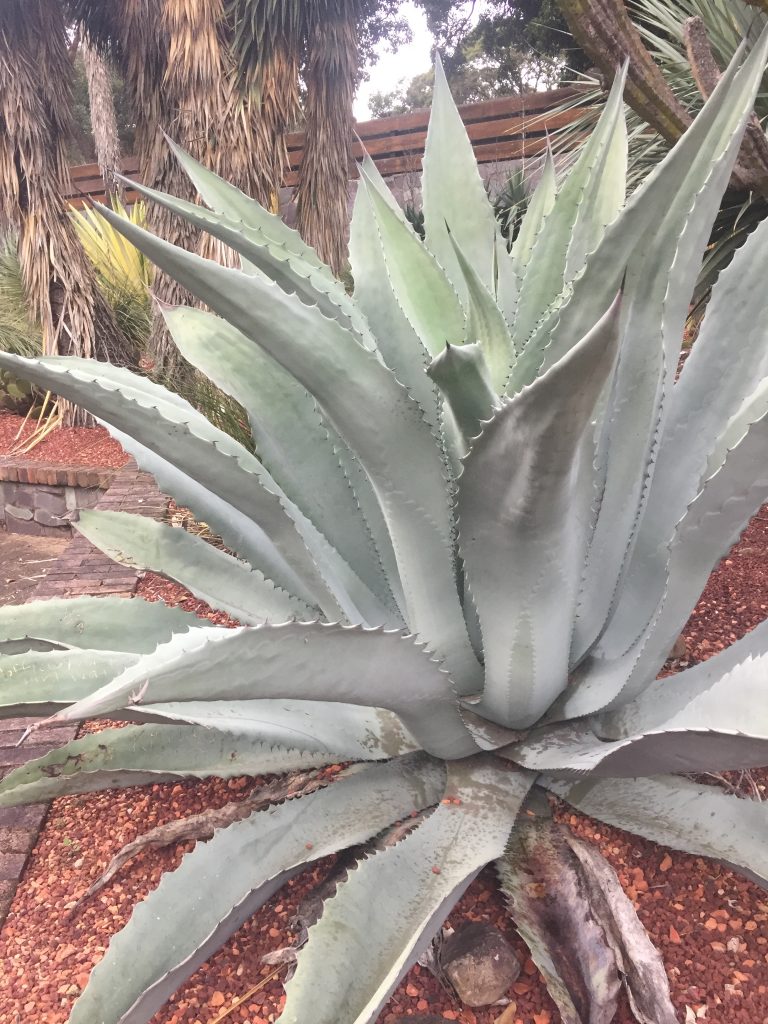 But he gave us some pretty nice close ups: 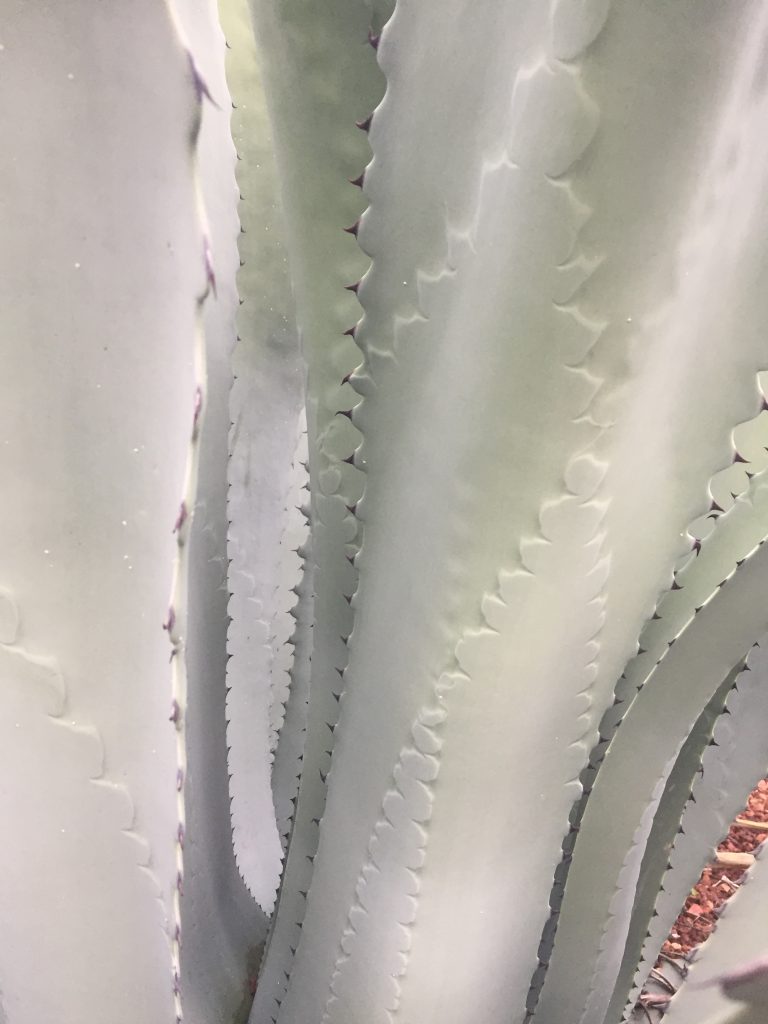 I don’t know about you but I really trip out on those indentations.  I think, aside from color, that’s my favorite thing about agaves. 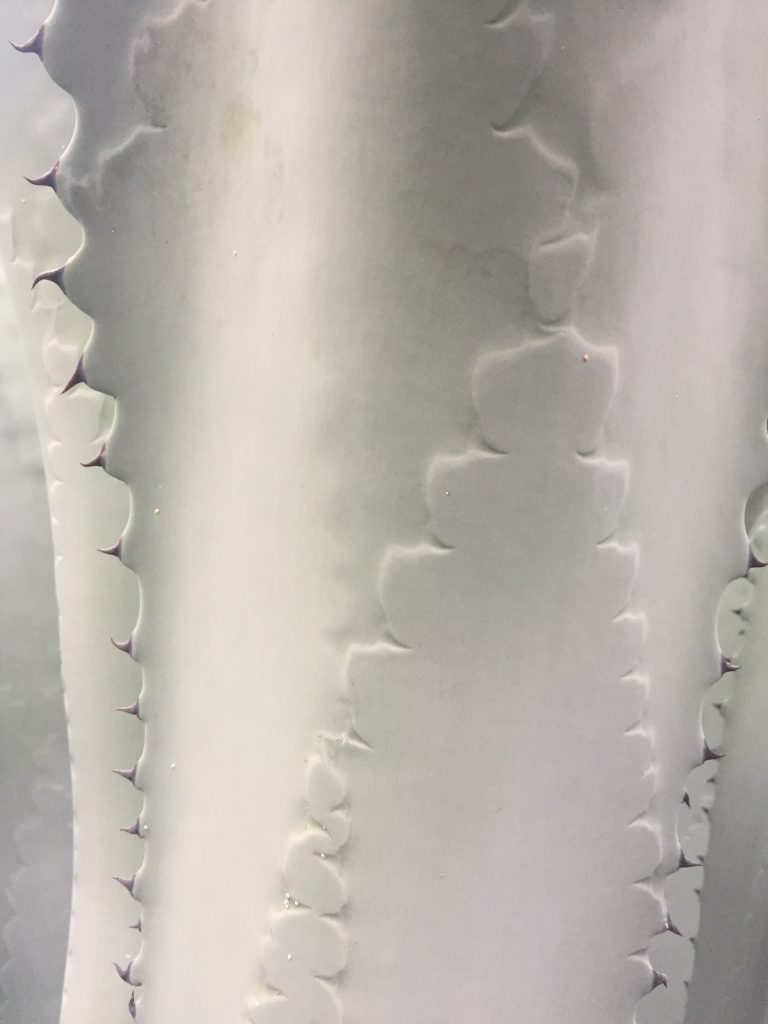 Cleistocactus strausii, the silver torch cactus.  A native of southern Bolivia to Argentina.  On the far left in this photo is Cleistocactus tupizensis.

Of course I didn’t get a photo of C. tupizensis because I am enamored of this particular color combination (silver and purple/rust).

I really enjoyed this vignette and its color palette is just lovely to me.  Unfortunately, none of these plants had visible labels.

Here I stopped and turned around and tried to get an overview.  I had to mess with this in Photoshop as it came out quite dark.  I very rarely edit photos at all, but the failing of the iPhone camera is its limited ability to adjust exposure when there is any amount of sky in the frame, and for this pic it was worth it to try to improve it. 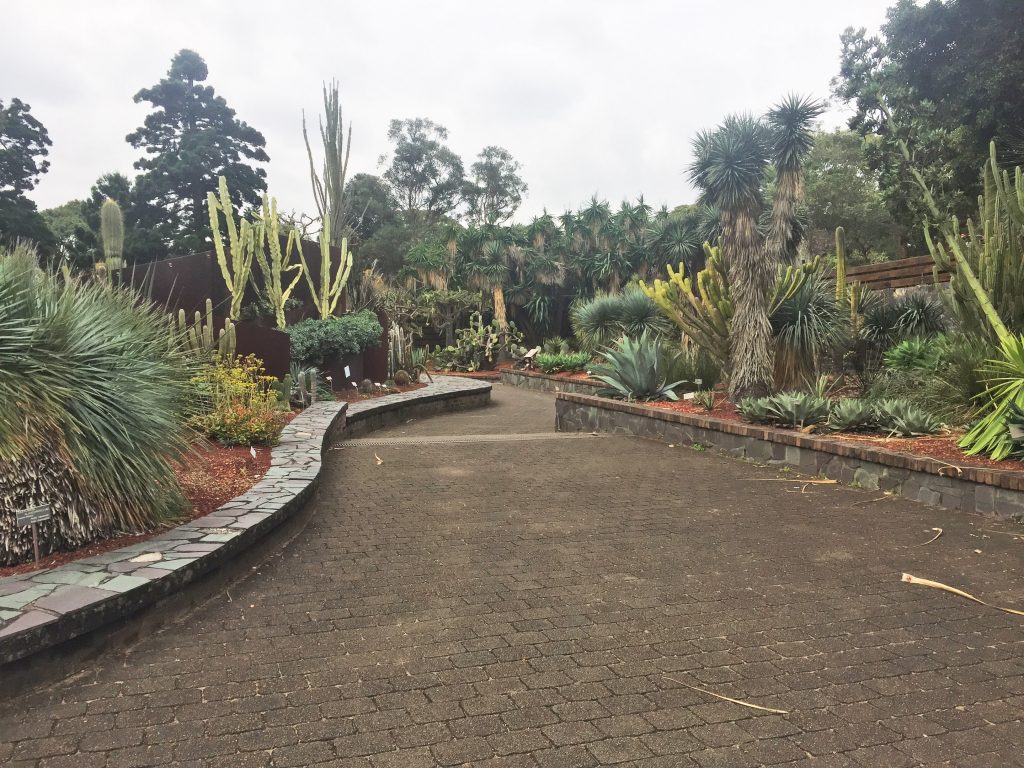 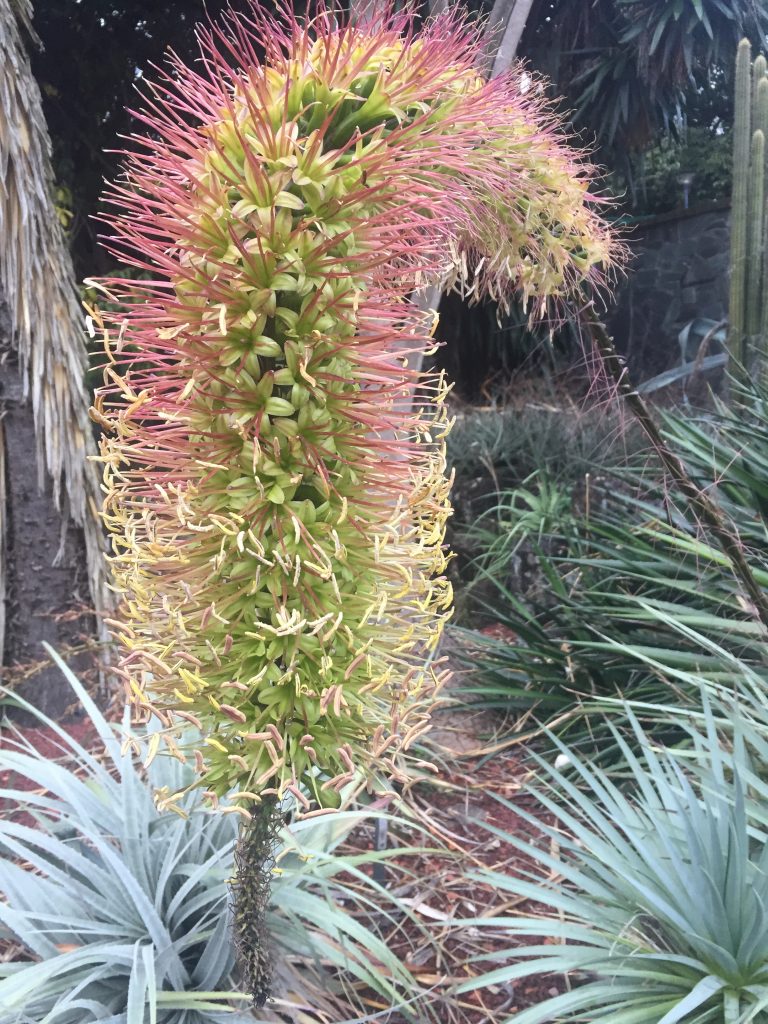 I think when I was there I just assumed this was a cultivar of A. attenuata but now I disagree.  How ’bout those pink filaments? I like the green/yellow/pink color combination.

This Crassula was interesting in that the stems? stalks? trunks? are rough and sort of shaggy, rather than smooth like the houseplants we are used to.  Jade plants are not uncommon outdoor plants in Sydney by the way. 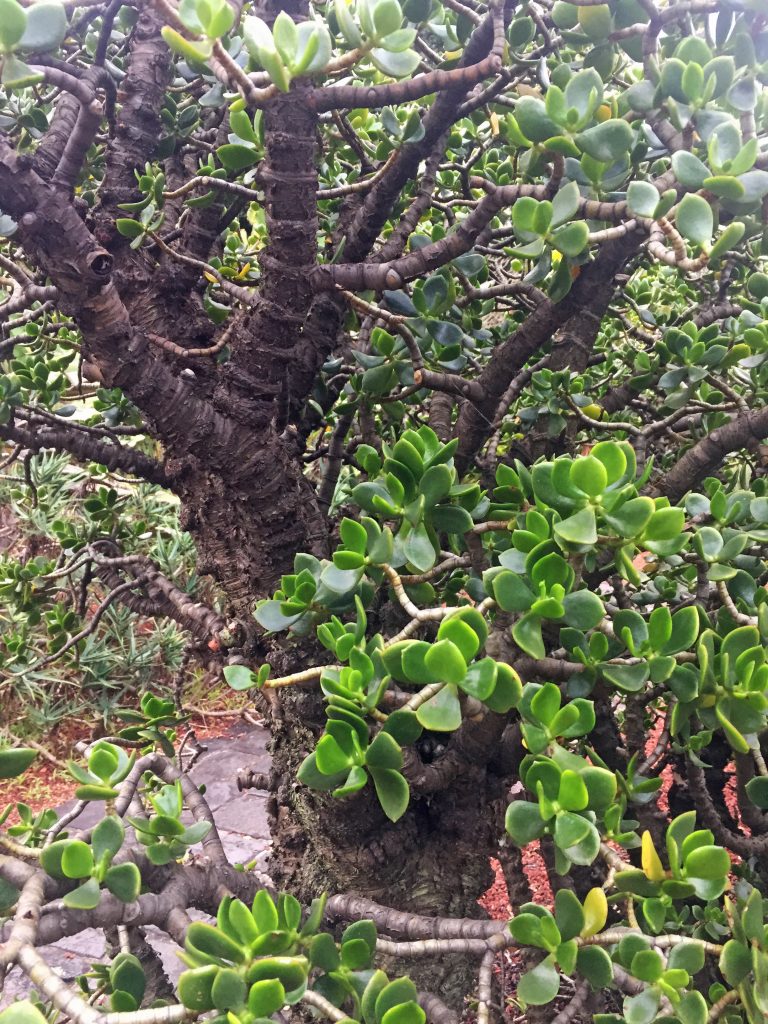 See what I mean?

This was a parking area divider zone in Bondi, just about to flower and over 3′ tall.  A hedge of jade:

Now we come to the Aloe garden which of course I really loved.  I have a bit of a thing for aloes, have no idea why.  Unfortunately, very few were tagged.  But isn’t this pretty with its glowing spines?

This next pic isn’t great because I used the zoom on my iPhone camera before I realized the birds weren’t particularly fearful.  But I’m including it because it shows some background plants and you get a sense of the drama of the scene.  The building here is the Maiden Theatre, built in 1899 and named for Joseph Henry Maiden, a previous director of the Botanic Garden.  The building was an herbarium until 1982, at which point the collection was moved to the Robert Brown Building, where it still exists.

Once I realized they weren’t afraid of me I could get closer. 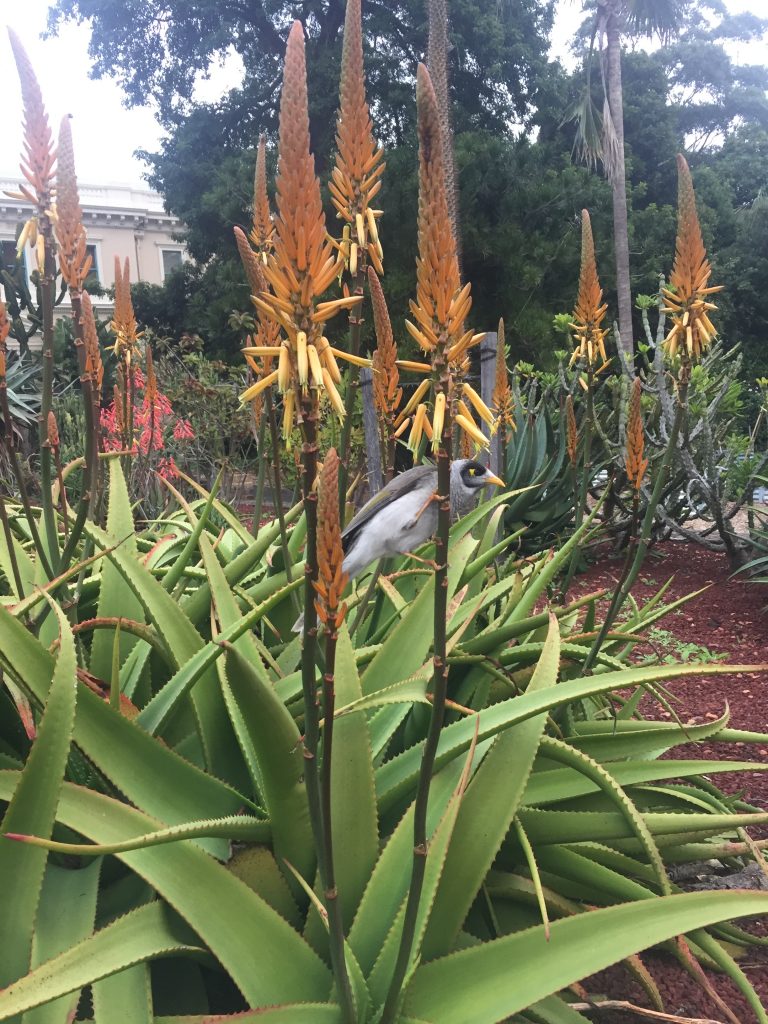 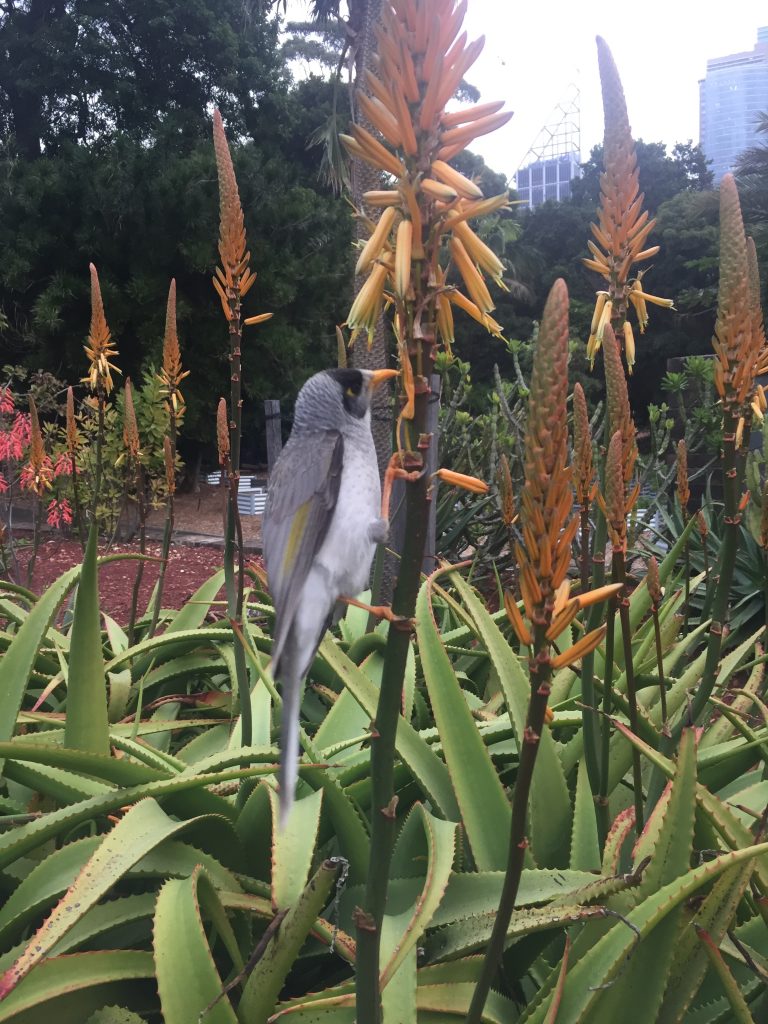 So I guess these birds are the ecological-niche-equivalent of hummingbirds, which are not present in Australia at all.  As for the aloe, I really kind of like how these seem to flop at rakish angles as they open.  To me it conveys movement in an interesting way.

I loved this dramatic little Aloe but I couldn’t get closer to it without hopping up into the raised bed and I felt like I probably shouldn’t do that.  But now that I look at this picture again, so many questions come to mind! What is that thing that looks like it fell over (Aloe)? What is the staked trunk? It’s a  Pachypodium but what kind? Is that a papaya in the background on the left? (yes). 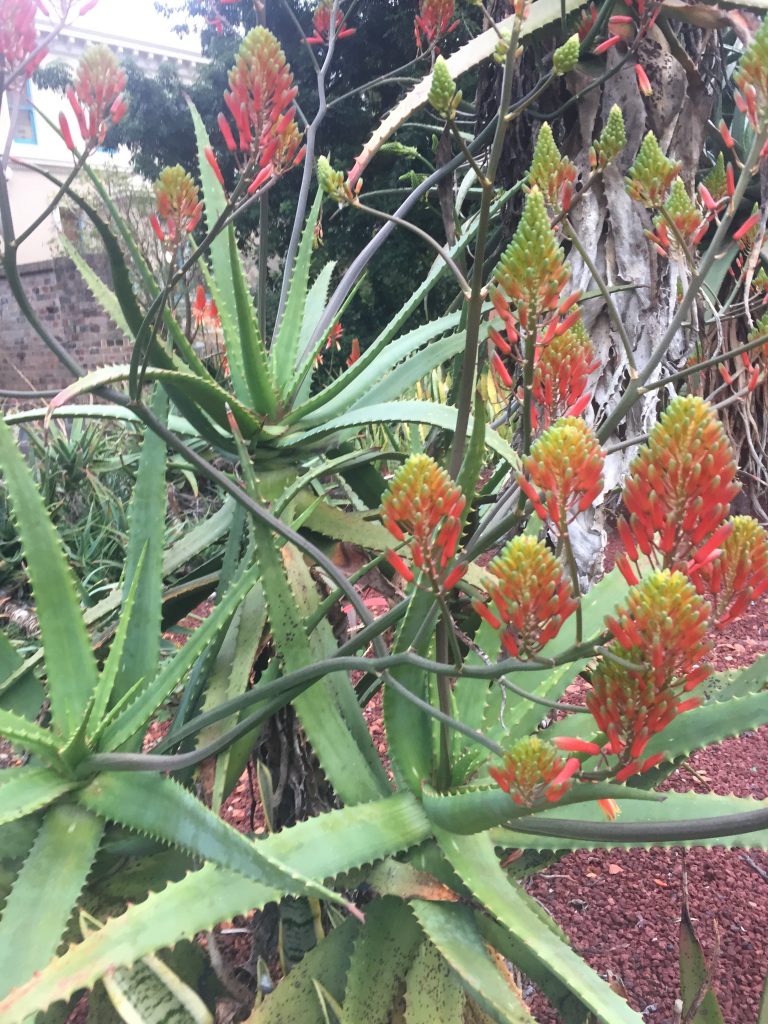 Above, more NOID Aloe with some variegated Sansevieria up in with them.  I love this Aloe’s green-to-coral inflorescence coloration.

While we’re on Aloe, here’s one I found in another part of the garden and it actually had a tag! Ha!

Hey look! A whole ‘nother planting of these guys:

In the above photo, the larger sign on left is the one in the very first photo in this post.  I think you’re supposed to see that when you first come in? I, of course, came in through some apparent back door and only found this sign toward the end of my tour here.

Next up is an Agave we found extremely satisfying.  I love it in the same way I love cabbage plants. 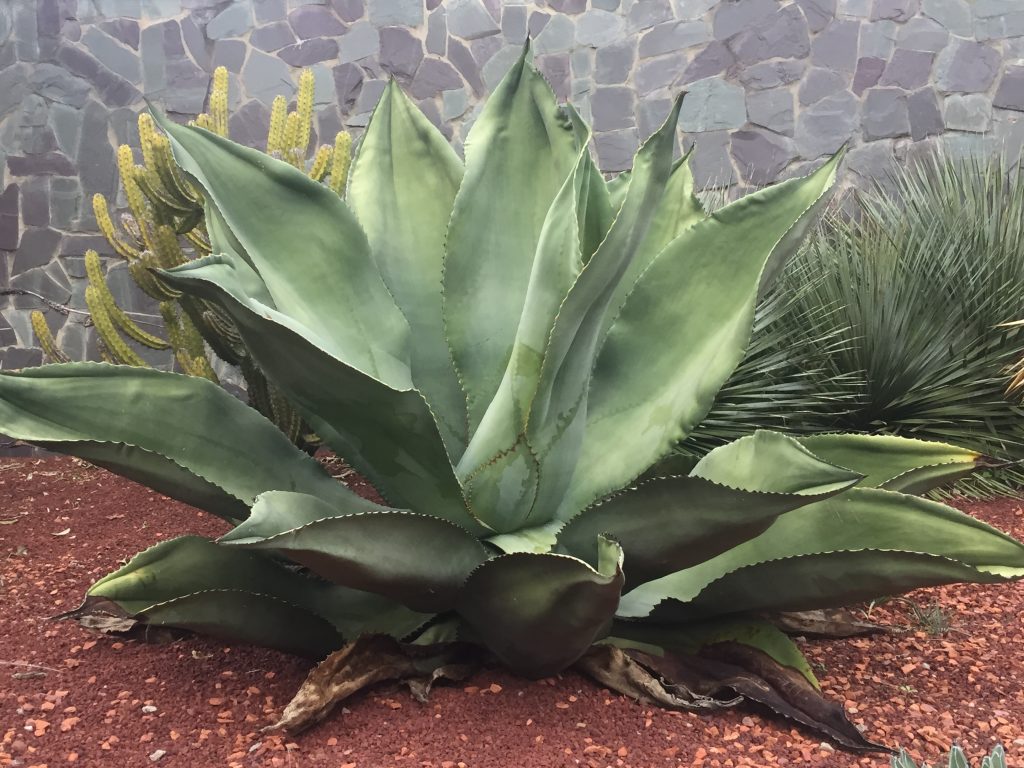 I took another picture with David for scale.  I’m not sure if that’s helpful because he’s not right next to it.  By the way I though the rock wall was quite nice, with the blues and purples. That yellow cactus looks pretty good against those colors, doesn’t it? 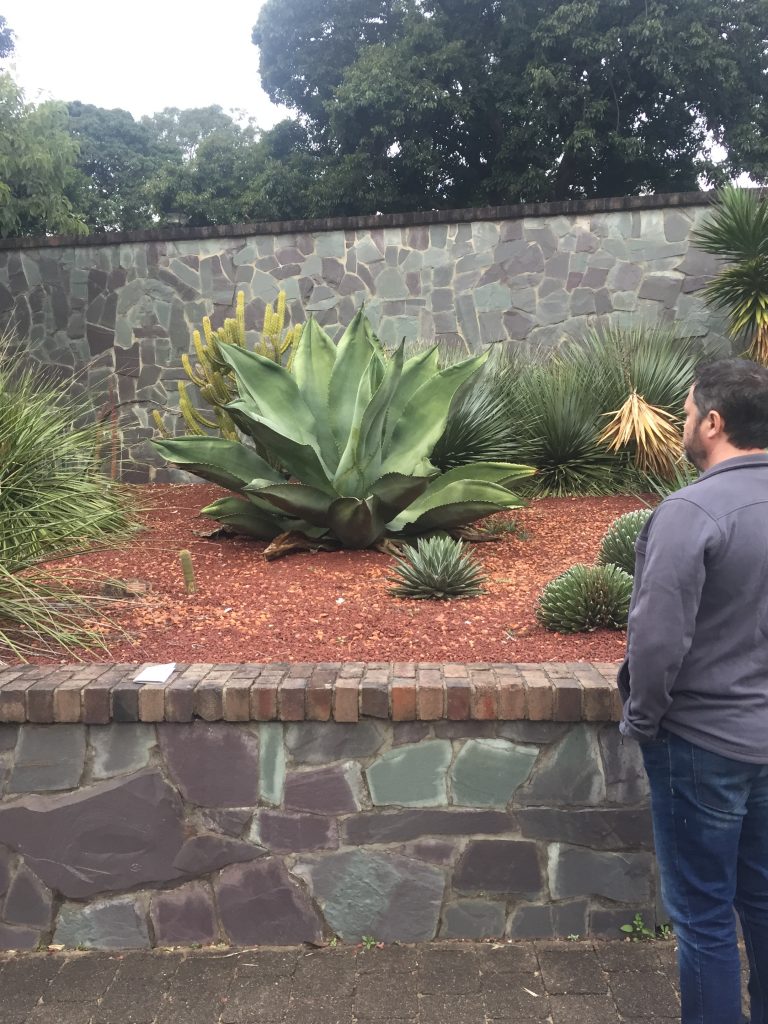 Were you eyeing those little perfectly neat pincushions of agave-ness right in front of David? I was too. 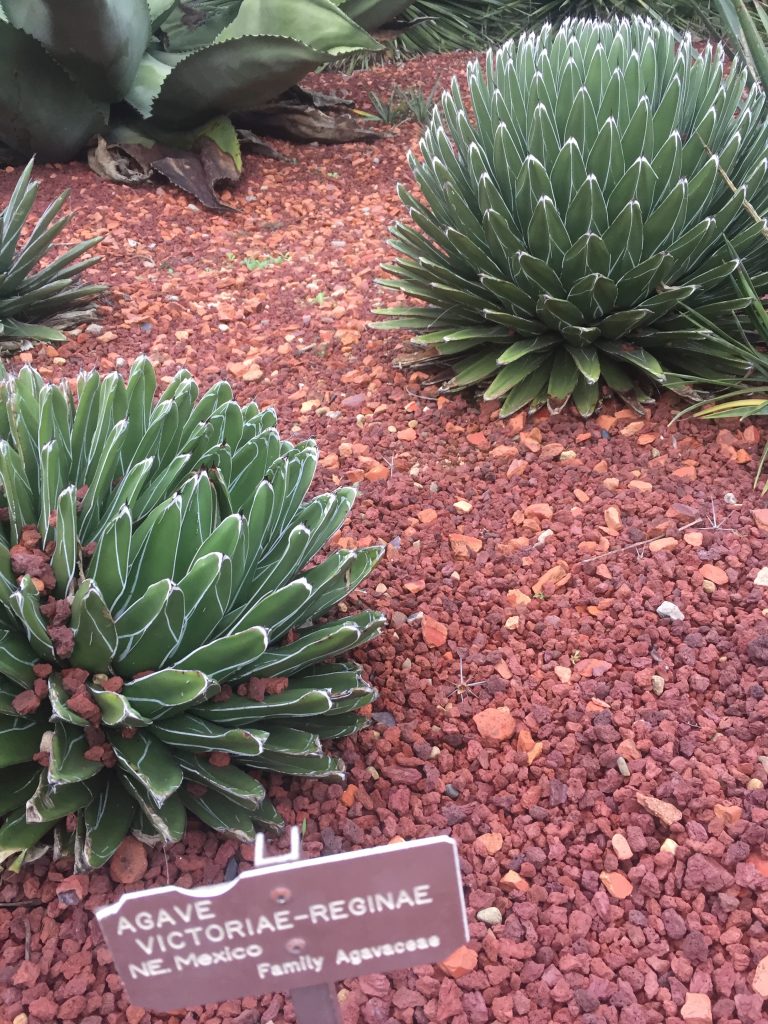 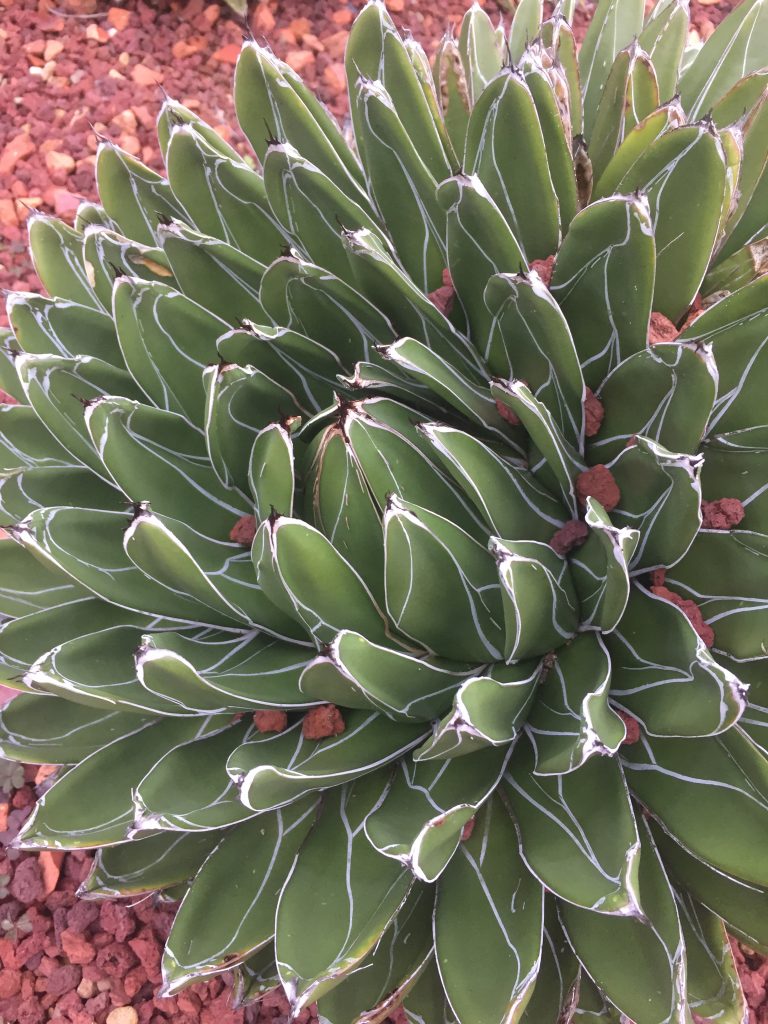 It’s annoying to me to think that people would intentionally put rocks in them, but I can’t imagine how else these got there.  Grr.

I’m not sure what these are but I took a photo because they were HUGE.  Some kind of Yucca? Something else entirely?  Their leaves are like 10-foot-long spears… 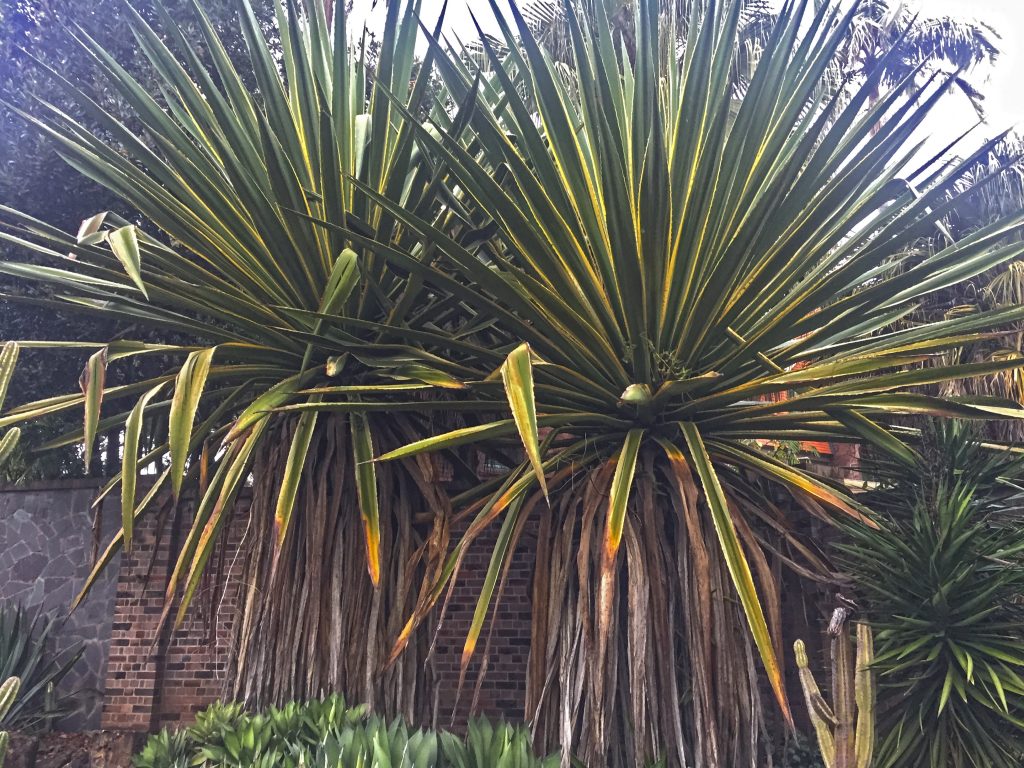 Oh look, another cute little pile of Agave attenuata.  Seriously these are everywhere.  It must be the best species for this climate. I appreciate their softness. 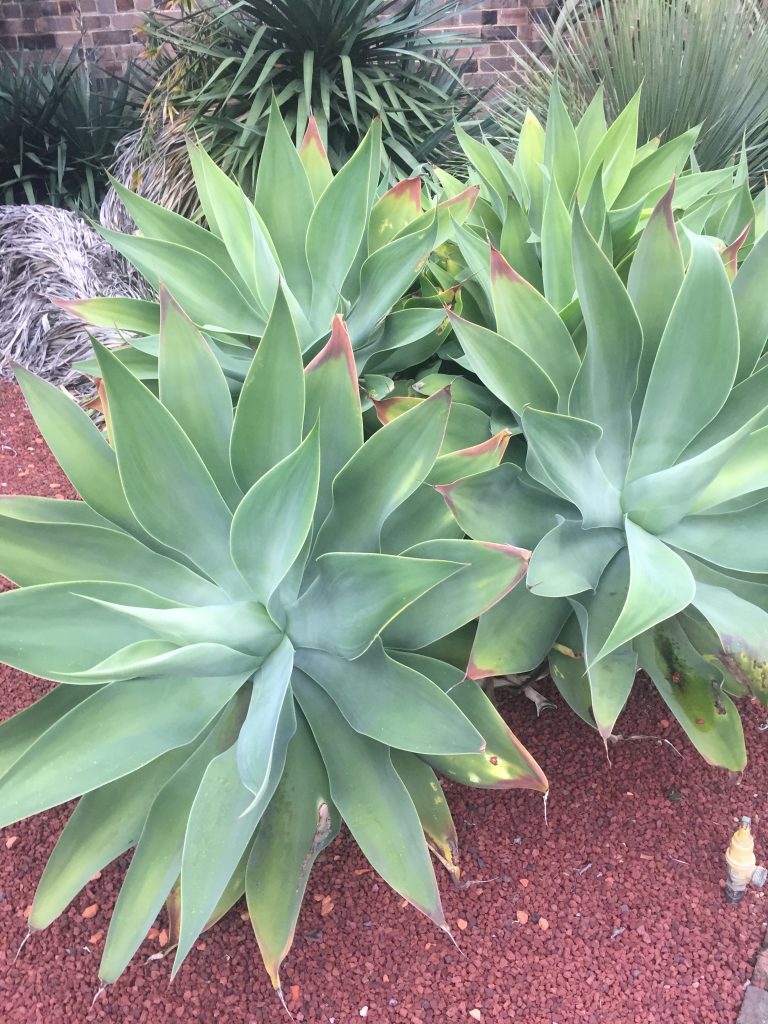 Not sure on this one, but I liked it.  It seems to allllmost have a lighter stripe down the center of each leaf. 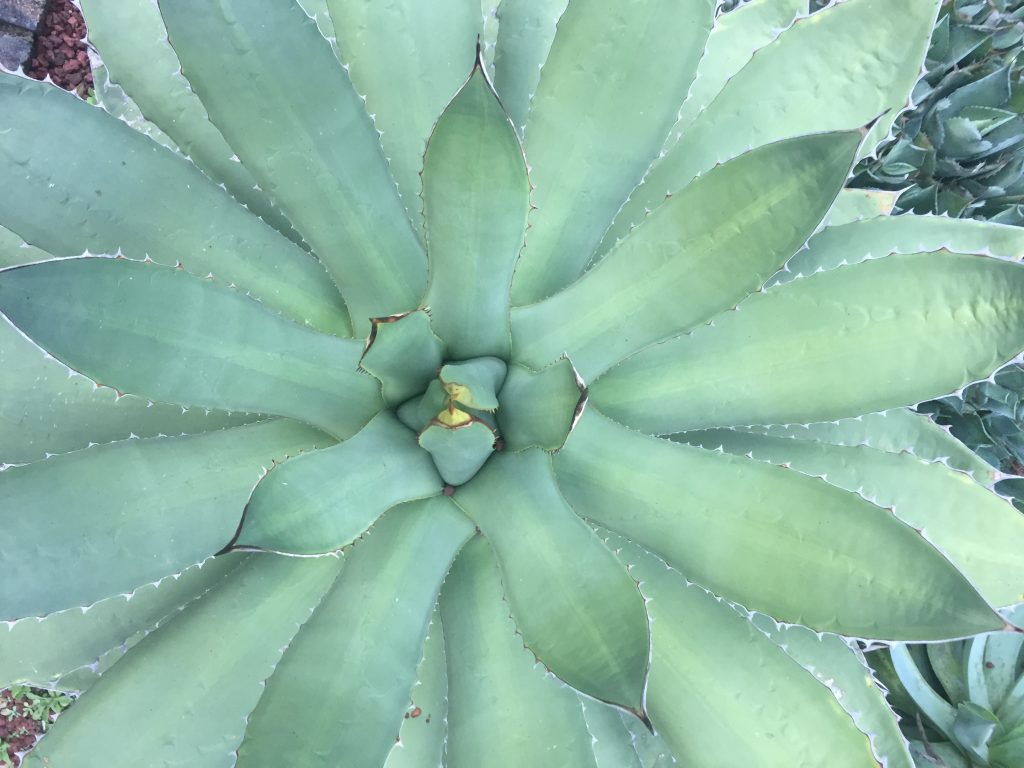 Here’s another plant I had to zoom in to photograph.  I took this pic to ID this thing just because it’s the weirdest plant ever.  Pretty sure it’s Cereus peruvianus var monstrosus.  I’m not 100% sure that’s how that name should be written, but it gets the point across well enough.

This cactus is an absolutely arresting plant and I really wish I could have gone up there and gotten closer to it.  It’s really interesting, and quite blue.  It was also the last plant I photographed in the succulent garden, and since I can’t stand ending a post with a crappy zoomed-in iPhone photo, I;ll send you off with an orchid from the glasshouse.  I’m not an orchid person at all, but I did find this rather exquisite and I think the genus name is hilarious: Epicattleya.  I can’t decide if it’s epic, or it’s bovine, or what…

I hope you enjoyed the succulent garden.  Thanks for reading!

4 comments on “A trip to Sydney’s Royal Botanic Garden”