Last year I sent a tromboncino squash vine right over this fence into my neighbors’ backyard.  Yes, on purpose.  This year, the luffas got into their lilac and made three or four fruits (technically berries! but let’s not get into that now).  At one point, he said, through the fence because he knew I was there and I knew he was there, “Are they supposed to be all soft like this?”

“Are what supposed to be soft?” I called back.

Yes, yes, luffas actually grow on lilac bushes.  If you let the vines climb them.  My neighbor, like many people apparently, somehow thought luffas came from the ocean or something.  I know this because he said so; and of course he got to learn his New Thing for the day and I’d have said he could certainly take the rest of the day off if he wanted but like me, he works at home, so that whole deal just doesn’t work for us.  Anyway he was stoked that he got three or four pretty good size luffas.

Anyway, the point of this post is to explain that it’s through plants that I’ve connected with every last one of my neighbors.  Some I’ve met while I’ve been working in the front yard and they stopped to chat on their way to or from coffee.  One family I met because I was mowing the lawn with a push mower and their older son stopped by to talk about lawn mowing.  Now he’s our go-to caretaker of the backyard birds when we’re out of town.  Another I met because I stopped to admire her garden, we got to talking, she gave me a tour and a little cannabis seedling.  She explained that her father-in-law (I think?) had grown it from seed, it could be male or female, and could I give it a home? She didn’t have room.  I did, it was female, and when it came time for harvest I asked another neighbor if he could help me figure out if it was ready or not (because he grew weed the year before), so he came over with his little weed magnifying glass and we looked at the trichomes with it.

I have a plant-based story for pretty much every single neighbor.  Even my usual letter carrier! That’s actually a cool story too: I was digging a vegetable bed in the front yard and he asked, “Who are you burying?” After I replied with some suitably outlandish answer, we got to chatting and he asked if we used to live on 13th? Why yes, we did for about 10 years.  He said he was the letter carrier there too! And he changed to this Milwaukie route around the same time we moved here!

It’s not like I would never have met anyone if it wasn’t for plants.  I just think it’s very cool that I am connected to all these wonderful people through plants.  It happened back on 13th, too, because of course we did front-yard vegetable gardening there.  Strawberries and cherry tomatoes were gifts to the neighborhood and they loved them.  I miss having a sidewalk – sidewalks and parking strips make it easier to grow snackable food plants that people can reach.  But I can still send luffas.

And now, part two, because I feel like it:

How to do up a luffa gourd!

Directions specific to the Portland area.

First get seeds.  Treat them like you would habaneros or watermelons; they need a long growing season and some real heat to produce well. Start indoors really early like February or March if you can.  Set out in May, or if you need to set them out earlier, give them some protection like a hoop house or something.  Passive solar heat exchangers, like jugs of water or bricks/rocks, are also useful I find.  As with all cucurbits, they will need ample water during the growing season.  And they’ll need something to climb on.

These guys got sections of tennis net this year.  The bricks are passive solar heat exchangers for when I first set them out.

If all goes well, the hope is that the gourds themselves will have time to mature before the vines are killed by a good freeze.

By the way the flowers are really quite pretty:

I thought for damn sure I’d taken at least one picture of the process of skinning and cleaning a properly mature luffa earlier this year but I can’t for the life of me find it.  So, you get pics instead of how to do it with one that isn’t mature.  That’s actually better anyway! Because when they’re mature, it’s WAY easier.  If you can do it when they’re a bit underdone, you can easily figure it out on your own when they’re all the way done.

Poke your thumb in and start peeling. 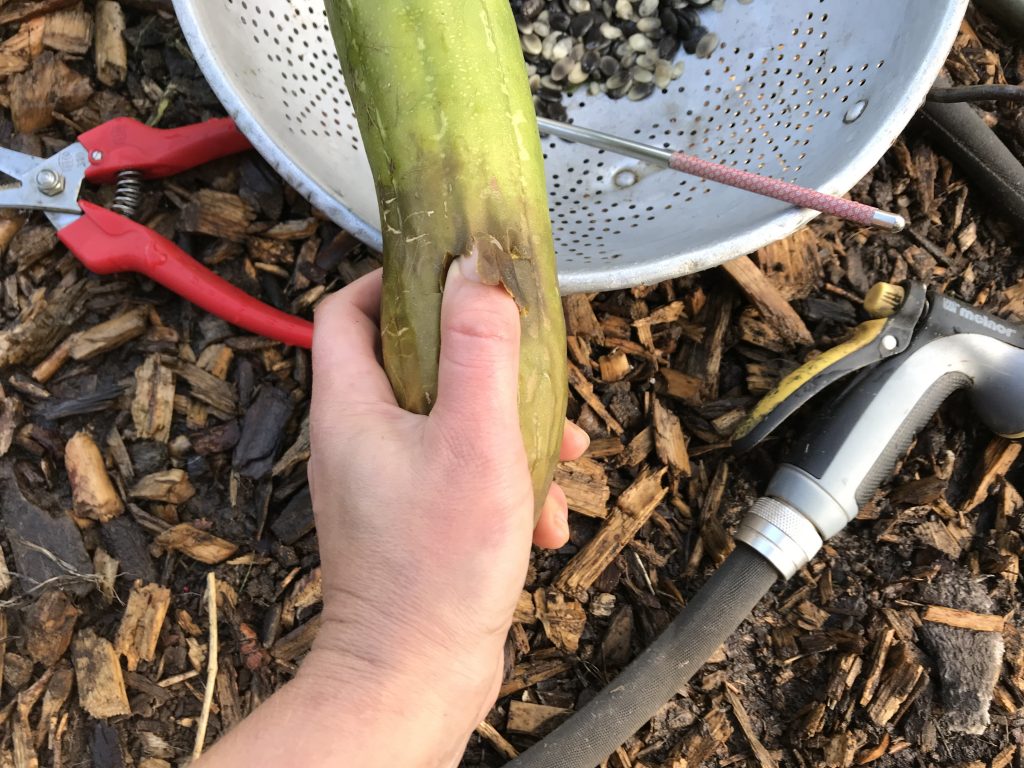 Ok, once you have all the skin off, now you have to spray the daylights out of it with your garden hose on full blast, to get the – what is it? fruit tissue? – out, and the seeds out, and leave only the tough, fibrous skeleton.  It’ll take a while and you’ll need the chopstick.  You can also take one end of it and whack it on something clean, to shake seeds out.  Don’t worry about damaging it; you won’t.  This is the part that is a million times easier if the fruit is fully mature.

When you’re done, you’ll know it because there won’t be any seeds and the remaining fibers will not feel slimy at all.  Cut in half if you want, or not!

My one complaint is that I wish I could have some that are denser and thicker.  I might try a different source for seeds – I forgot where my seeds came from but it wasn’t Territorial so I’ll try theirs next year.

Wednesday Vignettes are the brainchild of Anna at Flutter & Hum.  Thanks Anna!