Ok as promised, I’m documenting the process of grafting tomatoes.  I started these from seed on February 4th.   The instruction handout from Territorial (my seed source for all of ’em) said to do the grafting when they have two true leaves and the stems are between 1.5 and 2 mm.  Well, I’m not sure if “two true leaves” means exactly two (as in one set) or two *sets* of true leaves, so we’re right in between that here.  And as for the diameter of the stems, well, the rootstocks are slightly smaller than the scion stock but they’re all around 2mm.

After re-reading the handout, I realized that I’d made a mistake in sowing the rootstock into a tray along with the scion stock as well as some eggplants — after grafting, the recovering seedling are supposed to be kept in a relatively dark place at 80F for a week, and with high humidity.  Uhh.. so I don’t want to do that to the eggplants and the few tomatoes I’m not going to graft.

So, unfortunately, this means I have to transplant/move my rootstocks to a new tray before I graft them.  There will be root disturbance.  But hey! They’re ROOTstocks, so, they oughta be able to handle that, right?  Let’s hope.  Here’s what I’m gonna do… Move 18 of the 19 rootstocks that are ready to graft into the tray on the right.  Then graft.

Ok so I did that.  Since there were only 18 I put them in groups of 6 so I could easily access them to do the actual cutting and pasting.  Root disturbance was variable and honestly, having transplanted approximately five zillion tomatoes over the course of my life I don’t feel like any of them will suffer too greatly.

Oh and yeah, we’re doing this in the kitchen.  Don’t tell David.  He’s in Astoria tonight playing a gig with KFH so I can make a mess of his kitchen. I’ll clean tomorrow before he gets home.

By the way if you’re curious what I’m using for a rootstock, it’s Supernatural F1 from Territorial.  The packet says it has 20 seeds but it actually contained 19 (unless I lost one?).  I got 100% germination from those 19, but one of them took quite a bit longer than the others, and you can see that little baby in the pic here – it’s the little one in the upper left there. 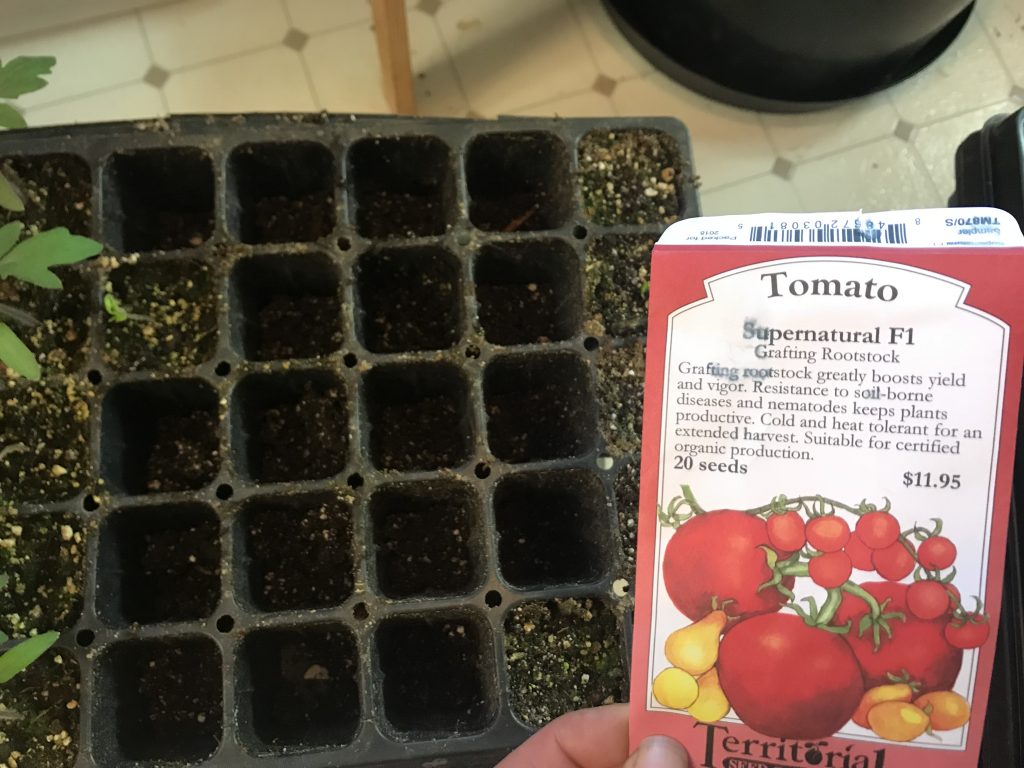 See how the rootstock is smaller diameter than the scion? I think that’ll end up being ok. I mean I hope.

This next one is Black Krim.  The scion has some anthocyanins that make it purple, and easy to differentiate from the rootstock.  I hope this is sufficient.. 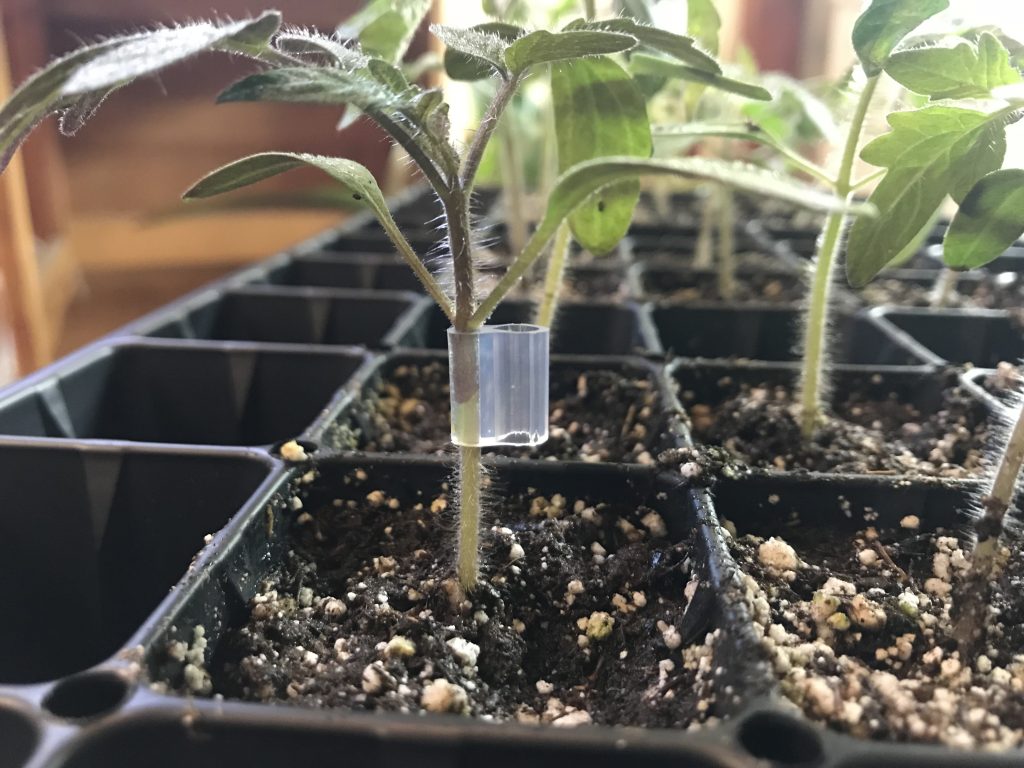 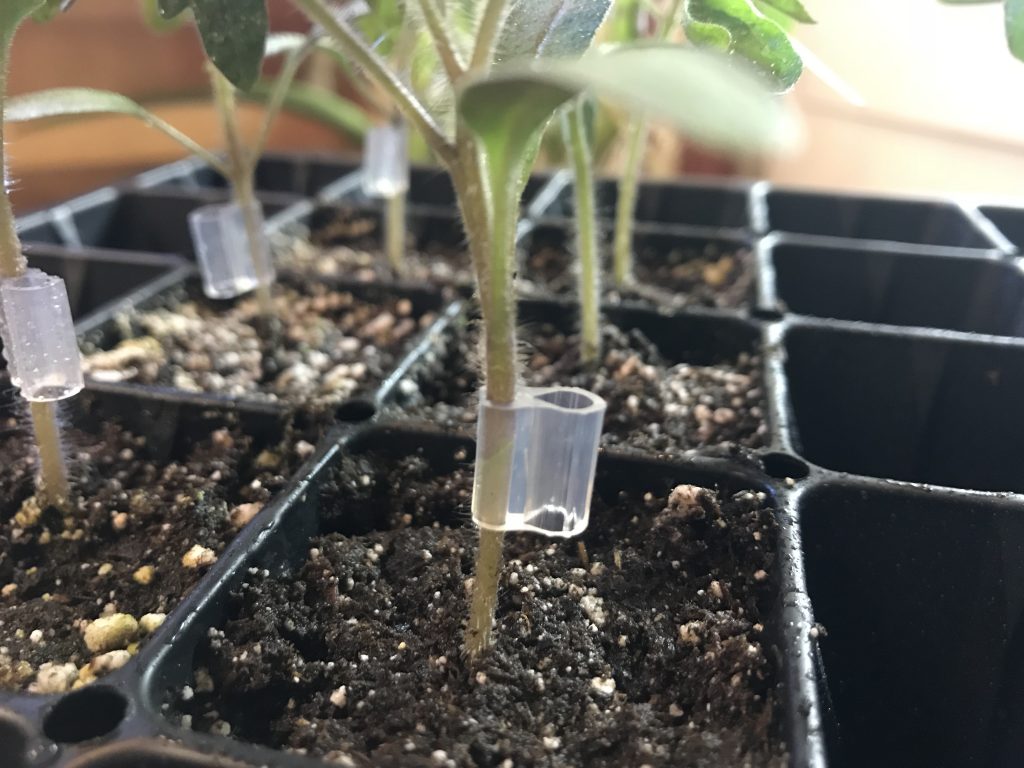 Ok, so now that it’s done, where do they go? Hey! It turns out that the top of the T-5 in my little grow-room in my office is a very warm and relatively dark-ish place.  Let’s do that.

Oh yeah, I need to mention the process of labeling.  We like to make diagrams – I’ll just let this picture tell the story.  Here you can also see the carnage of the rootstock plants’ leaves.  Why does this make me feel so strangely sad? I think I’ll order another packet of rootstock seeds, because I’d like to try grafting some of the super-hot peppers my friend Justin wants me to grow, and I want to grow out one rootstock plant just by itself, to see what it’s like. 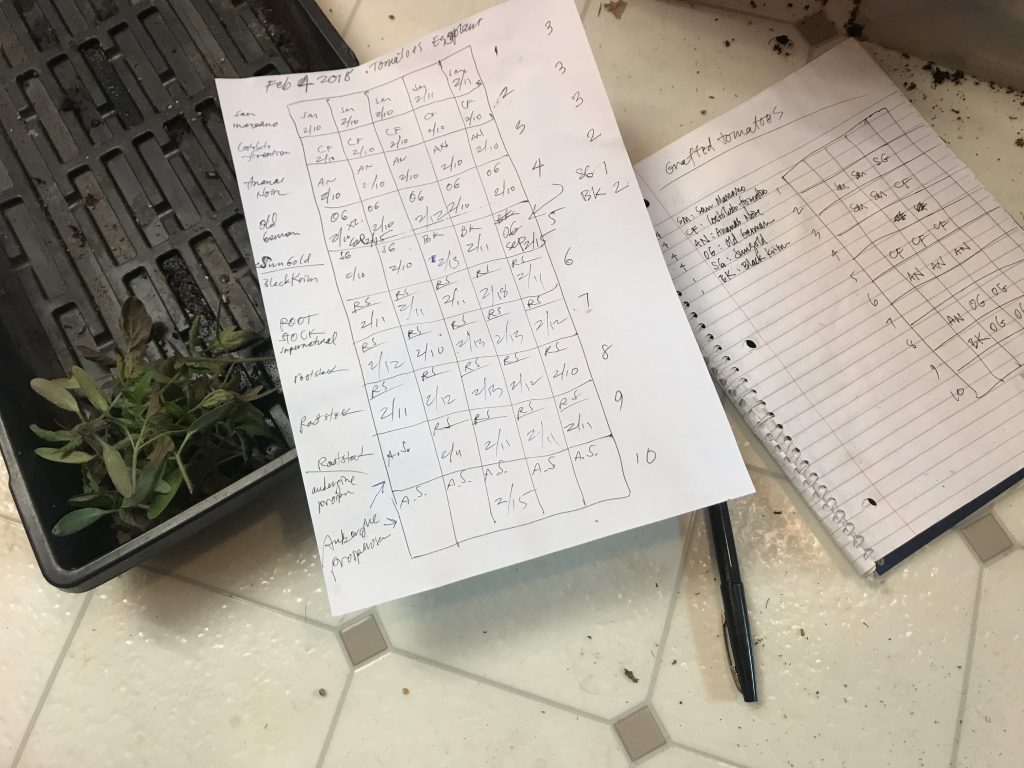 And then there’s this strange clear-cut, which is both painful and very hopeful.

What’s hopeful (aside from the tomato seedlings here that will get to grow on happily) is that I get some more space in my seeding area to start new things! What should I start now? Flowers? Brassicas? More aubergines? I’ll think on this for a while but if anyone has any brilliant ideas I’m game.

Cross your fingers for these little guys… 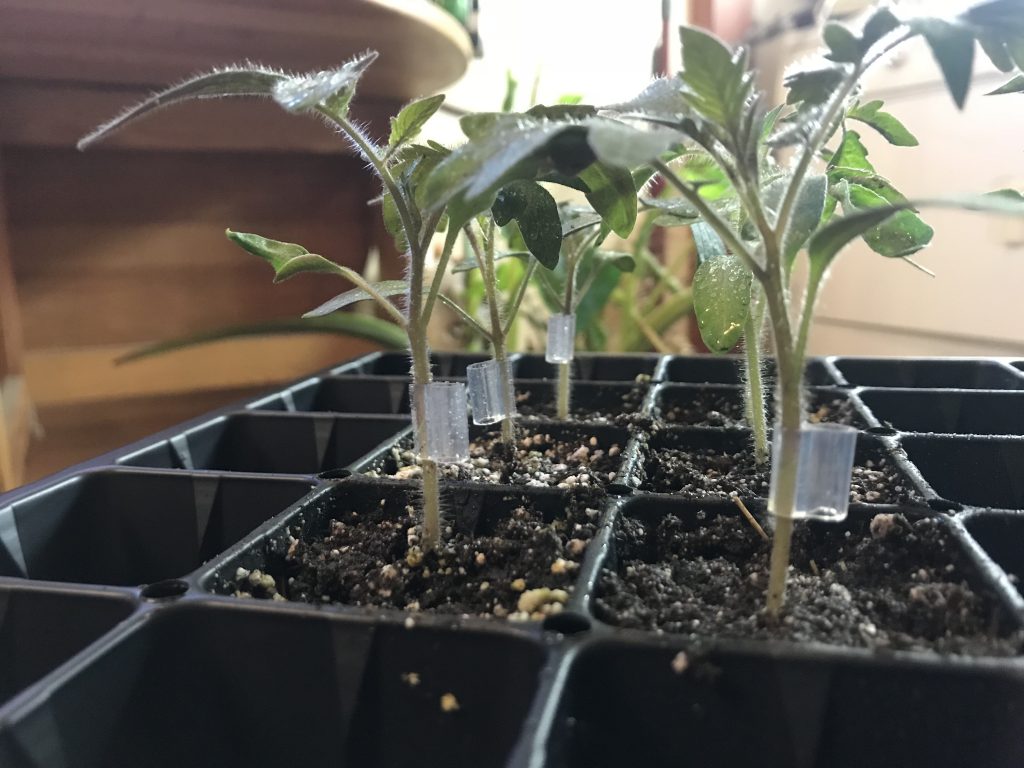 HOLD ON I HAVE AN UPDATE

24 hours after grafting they are looking frighteningly wilt-y. 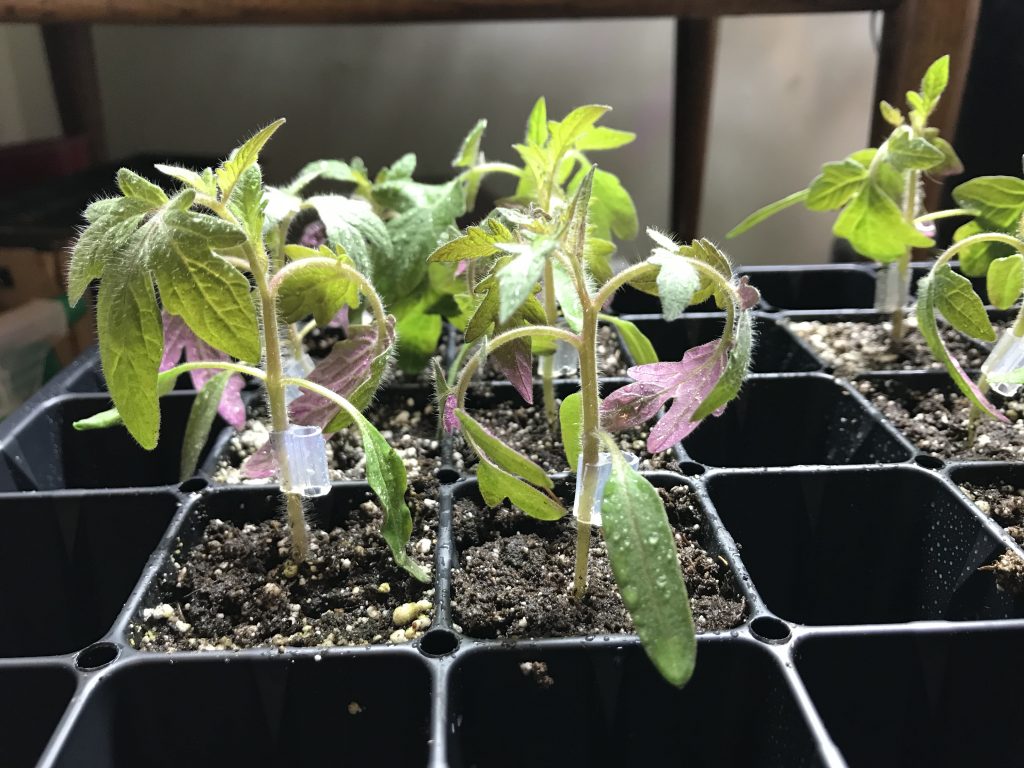 And as you can see above there’s no lack of moisture. 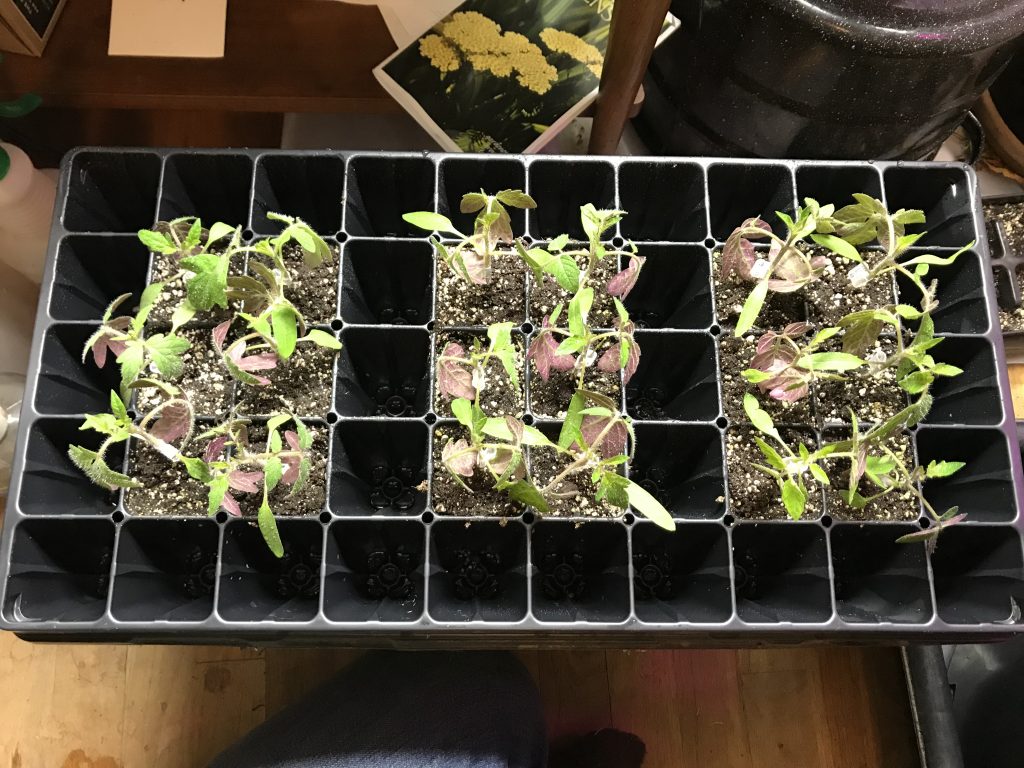 Nothing to do but wait… And then this morning:

So, clearly water is being conducted through the graft unions.  A good start!