It’s only natural that after a few days out of town one must inspect one’s garden.  Happily, I found lots of signs of spring! 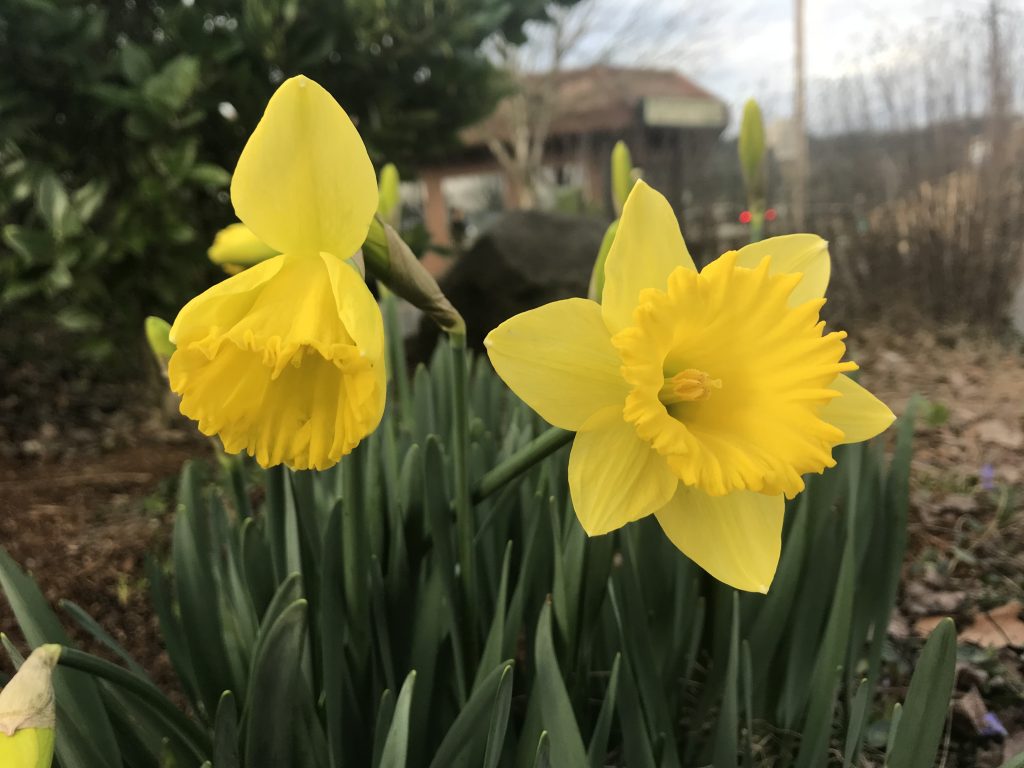 Ok, ok, the daffodils aren’t in my garden – they’re across the street from the place where I get my coffee beans in downtown Milwaukie.  By the way a big part of the point of this blog is to serve as a record of when things get planted, when they come up, when and how they die, etc.  So some posts, like this one, are really more about recordkeeping than anything else.

Anyway back to the garden.  I do have daffodils! But they are not as far along; I *think* these are ‘Salome’ so they’ll bloom later than the yellow guys above. 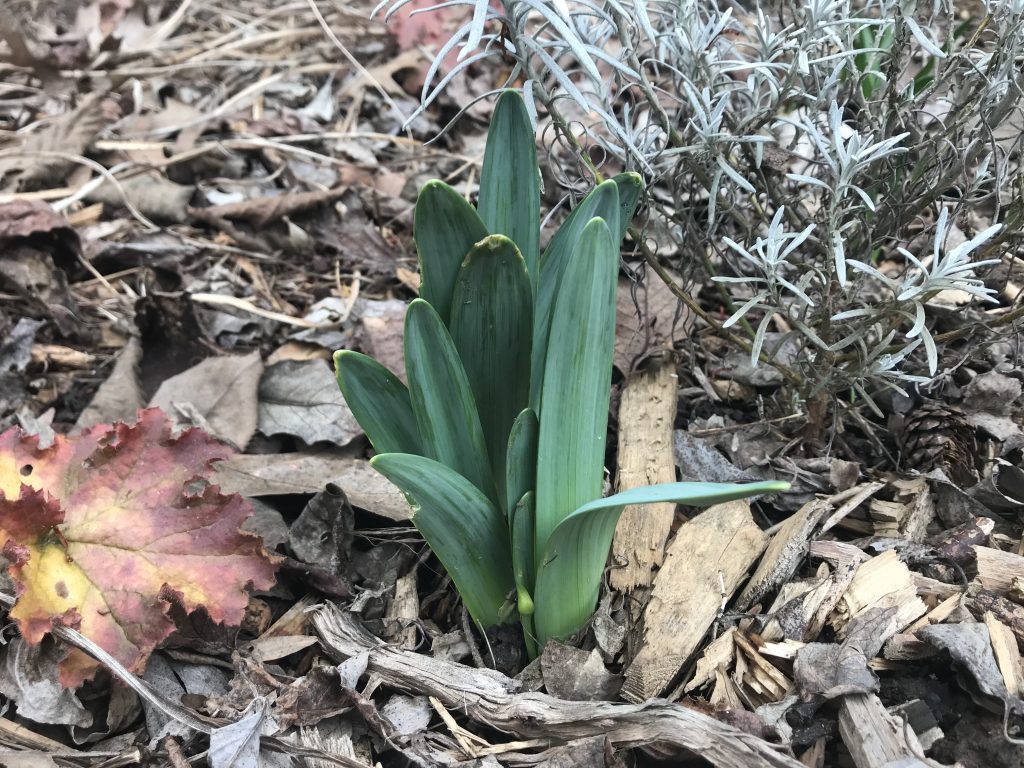 This next one is the very beginnings of the Macleya cordata/microcarpa.  Look at those wee little veins! 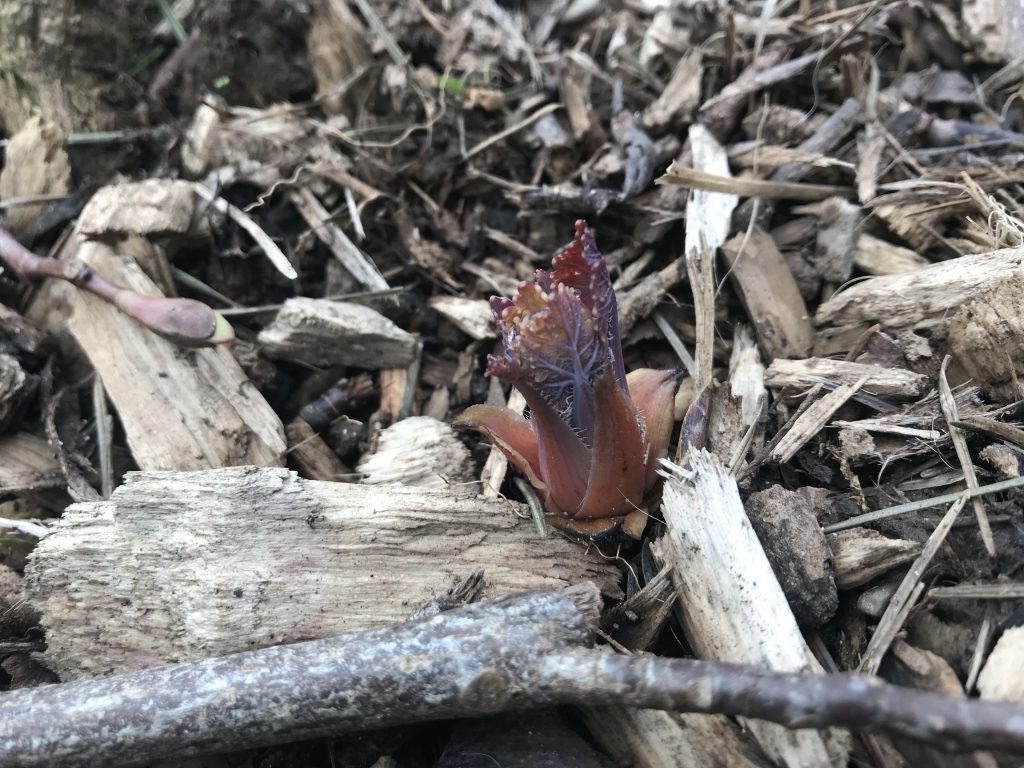 Here comes Persicaria virginiana ‘Lance Corporal’ – turns out the ducks really like eating the seeds of these.  That’s probably to my advantage as I don’t need this thing to spread all over the place. 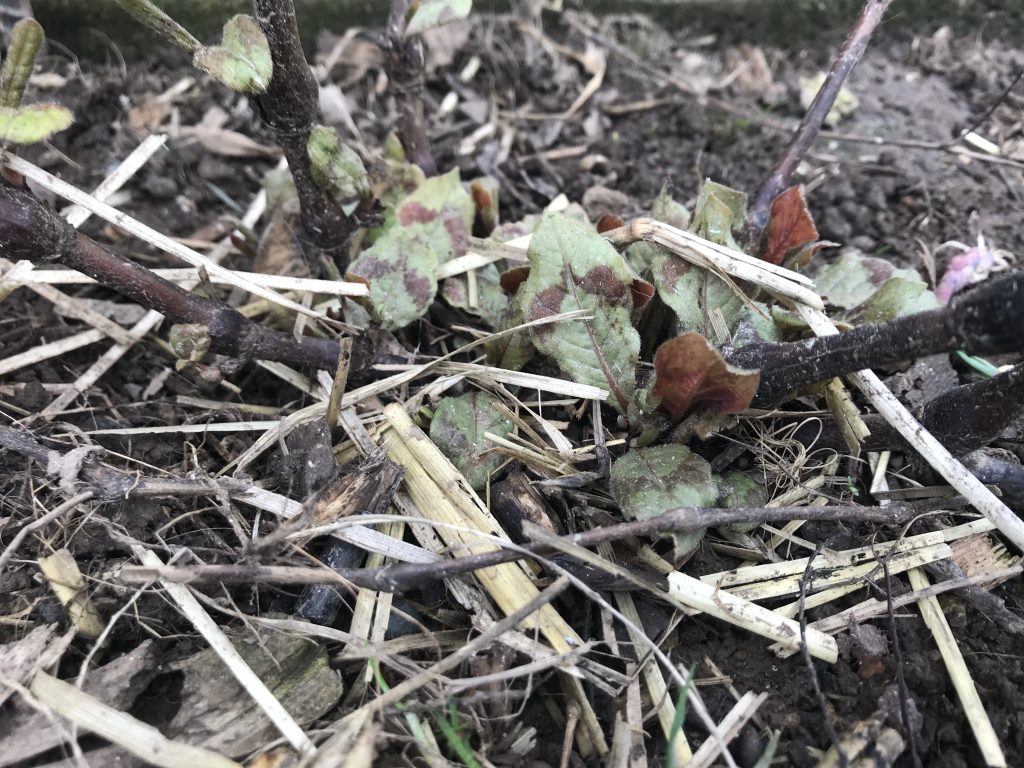 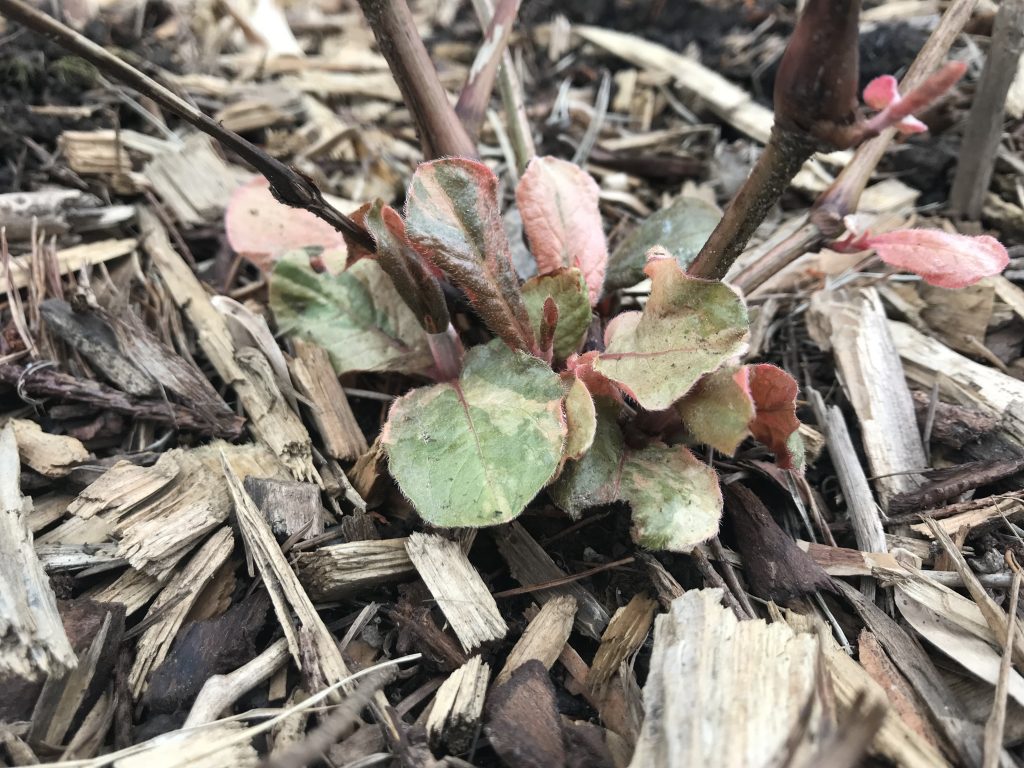 This was one of the biggest suprises! The largest leaf here on the Tetrapanax never actually died/fell off over the winter.  I really wish I had a photo of it from last week – it was really curled backwards and looking shivery.  But now it’s grown and almost completely unfurled, AND those two new leaves! Those were just tiny little ideas last week! 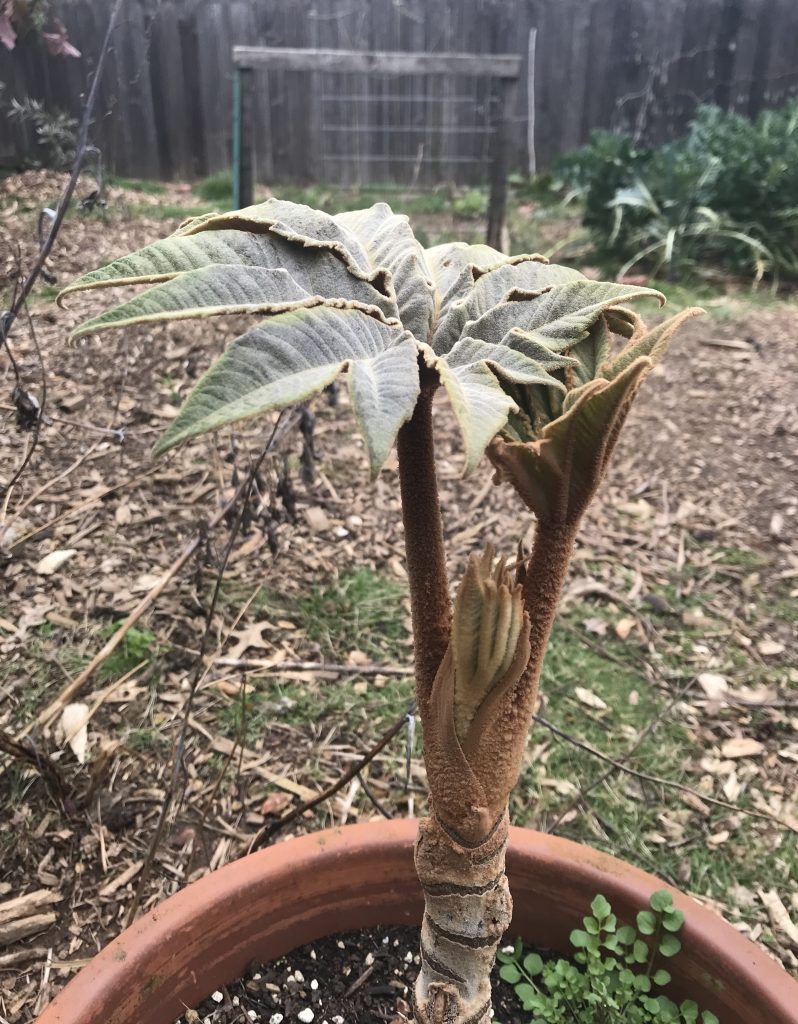 My little Azara microphylla! Are they supposed to be fragrant? I couldn’t detect a scent.  Hold on I just figured out that these are not OPEN yet.  Duh.  Sorry, I’m new to this plant… 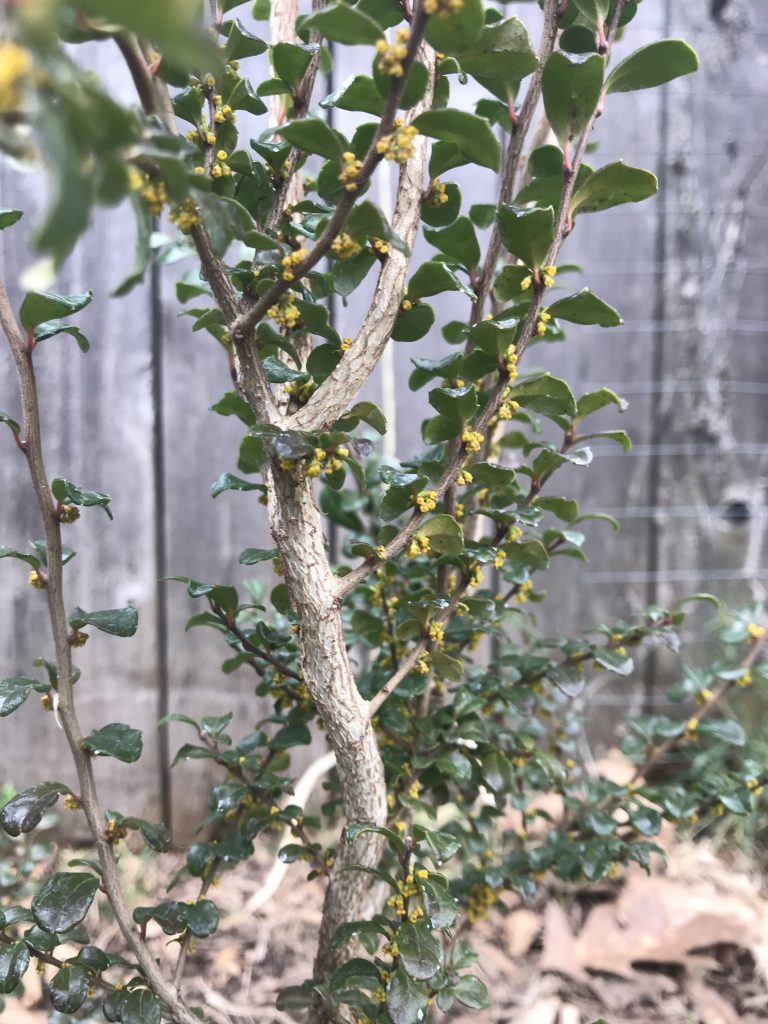 Not only did Hydrangea quercifolia (cv unknown) not lose its leaves, but it’s already pushing out new ones. 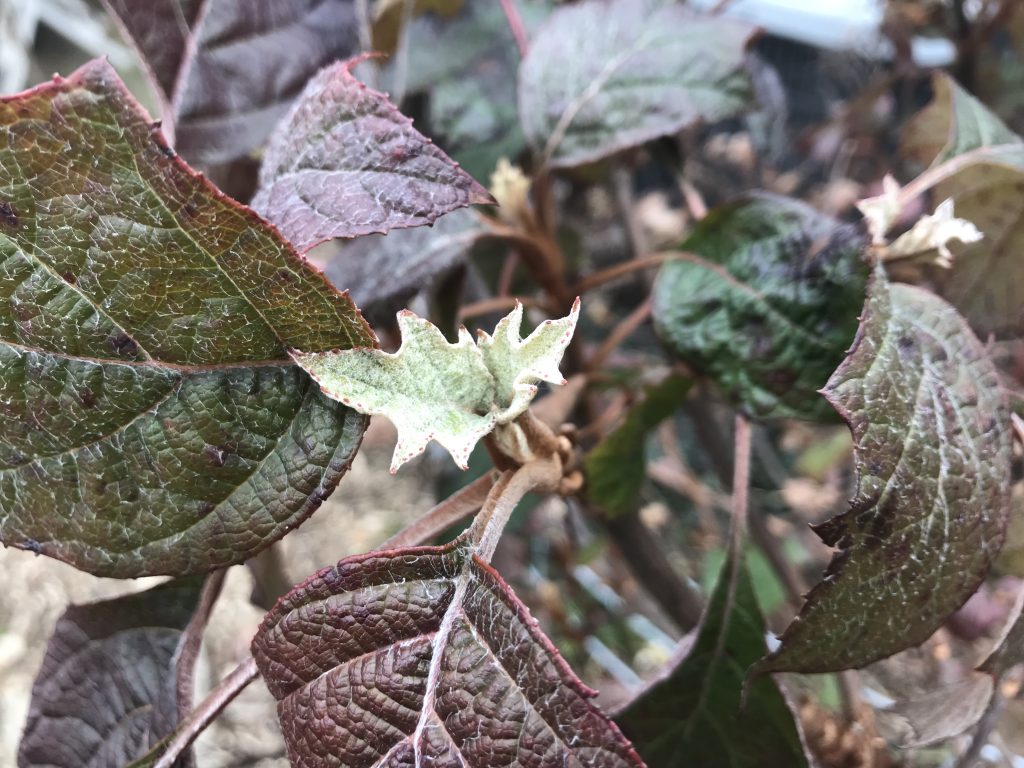 Tanacetum parthenium (feverfew) has been trying to bloom all winter.  Finally! Apparently it’s a short-lived perennial but most gardeners probably consider it a self-seeding annual.  I think they all got killed off last winter.  This is one of a scant handful of plants my chickens won’t eat, but I still have to protect it from those jerks because they’ll scratch at the ground around the plants and dig them up. 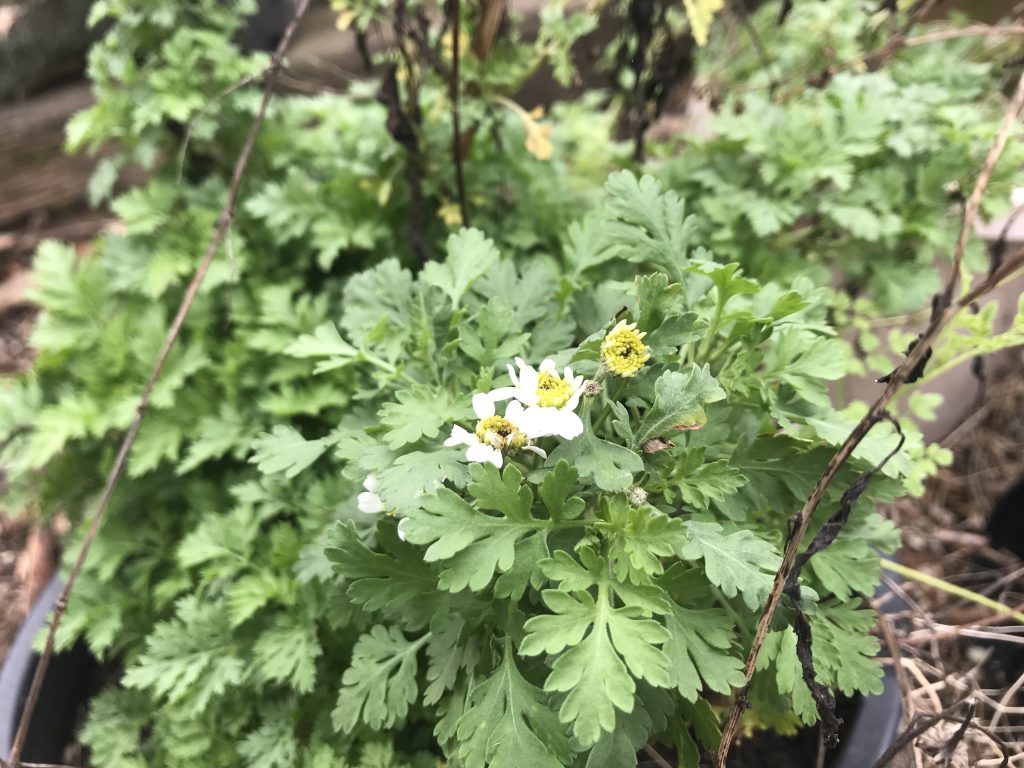 Allium schoenoprasum – chives.  Been going like this for a month now.  Yeah that’s perlite.  This is a raised bed we made last year for kitchen herbs that like excellent drainage.  The soil is mostly Sunshine mix #3 which was left over from a friend’s indoor garden; it only gets used once because sanitation, you know, mites and the like.  Turns out rosemary, basil, and thyme love it. 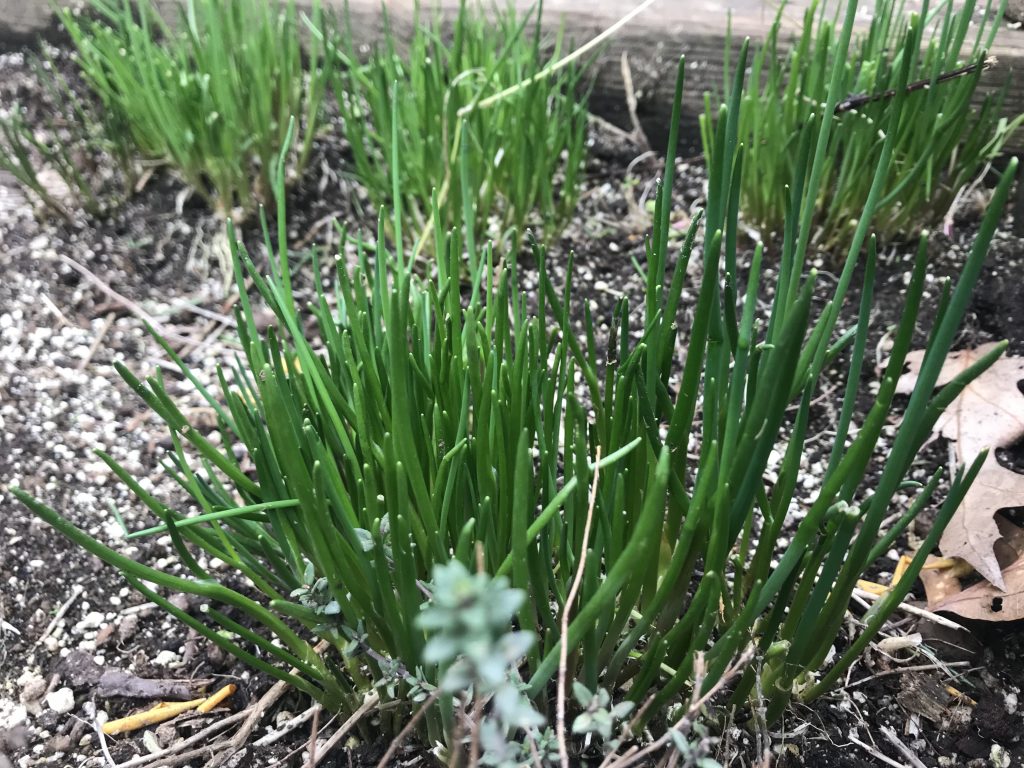 And while we’re on the subject of edibles LOOK my ornamental cauliflower did this! I’ll remind you so you don’t have to remember or scroll: this was started from seed in July 2016. I know! It’s crazy! 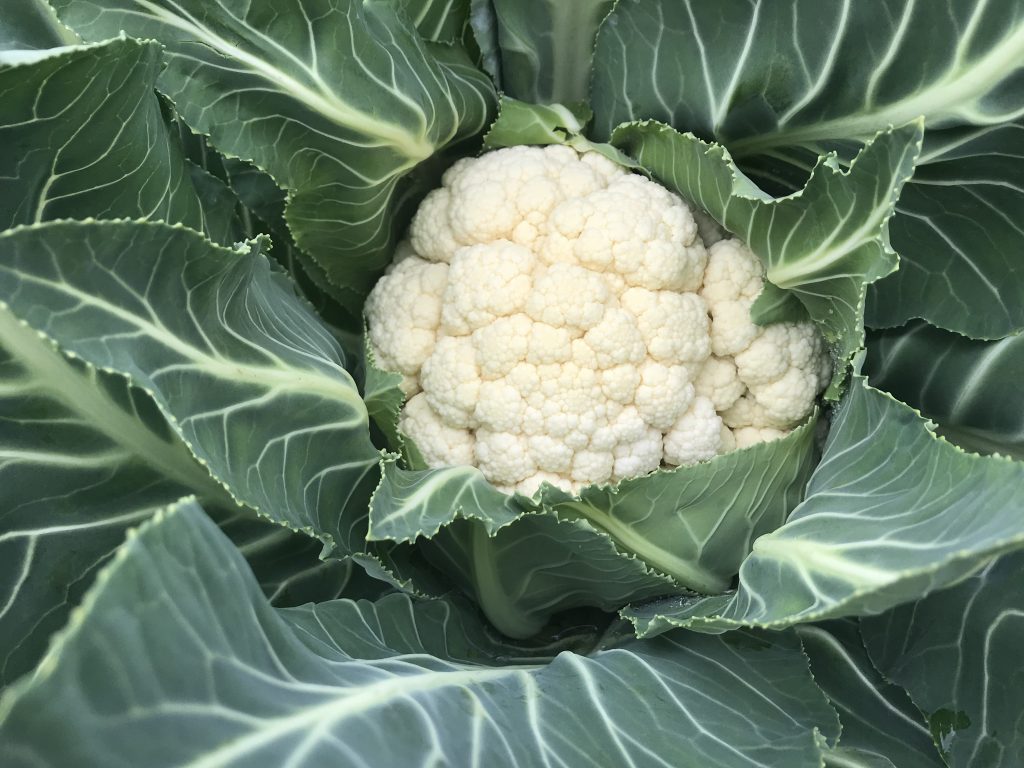 Ok let’s go to the front yard and see what’s going on.

Hamamelis ‘Jelena’ is finally finishing up.  Two months of bloom: I am impressed.  And then afterward these shiny wine-red sepals hang out for a while and look cool. 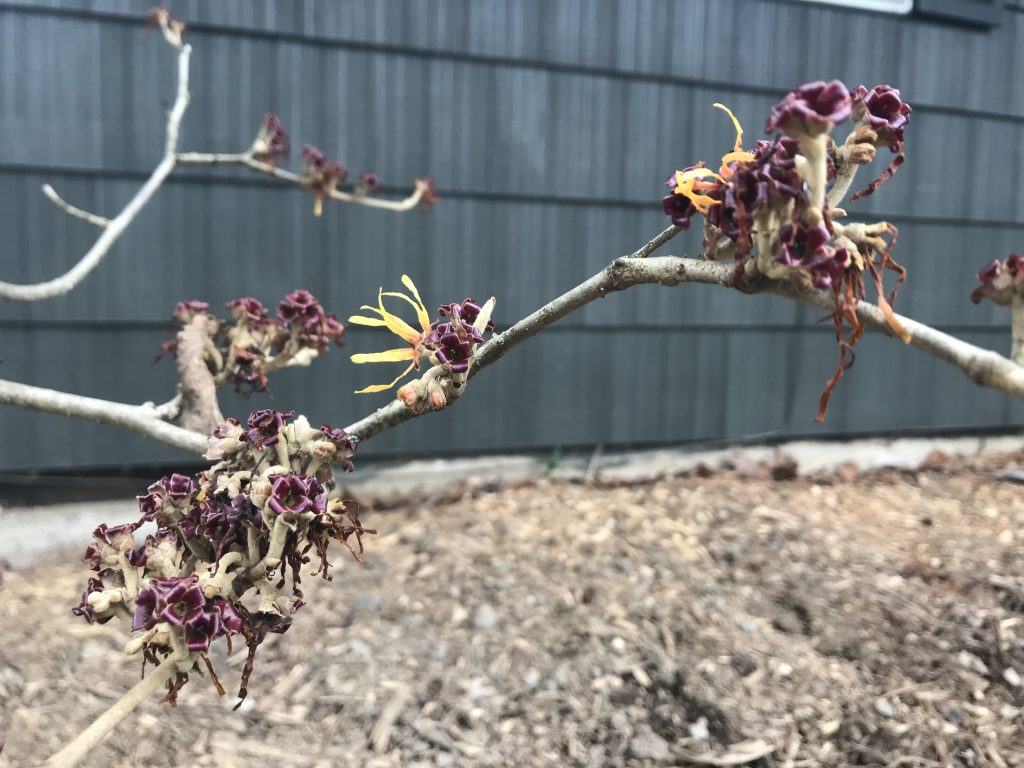 Underneath the Hamamelis is a pile of seedlings of Limnanthes douglasii, which actually first came up in the fall and had no problem with frosts or ice or anything.  There was Nemophila maculata here too but I’m not sure it managed to reseed itself.  I might help these move around a bit. 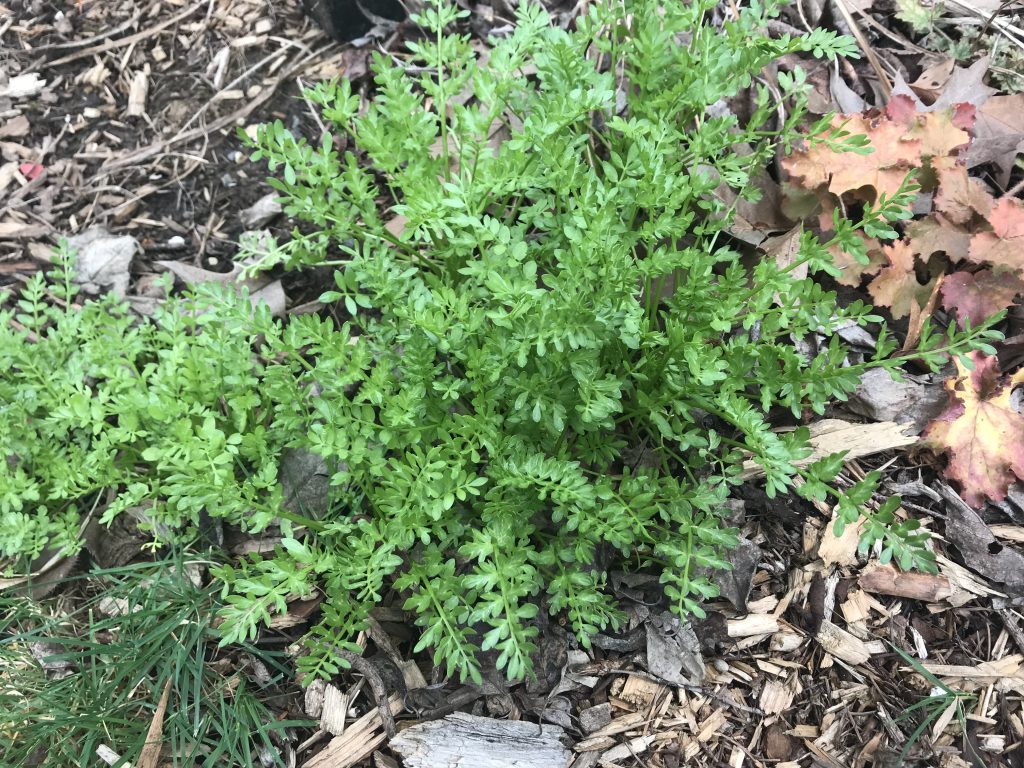 Grevillea victoriae is too young to flower but it has some very promising coppery new growth.  Those dark wiry stems belong to ‘Hot Lips’ Salvia which lost almost no leaves this year and barely even suffered an interruption of flowering (it has flower buds on it now).  Last year, it lost 90% of its leaves and stopped flowering from December through about April. 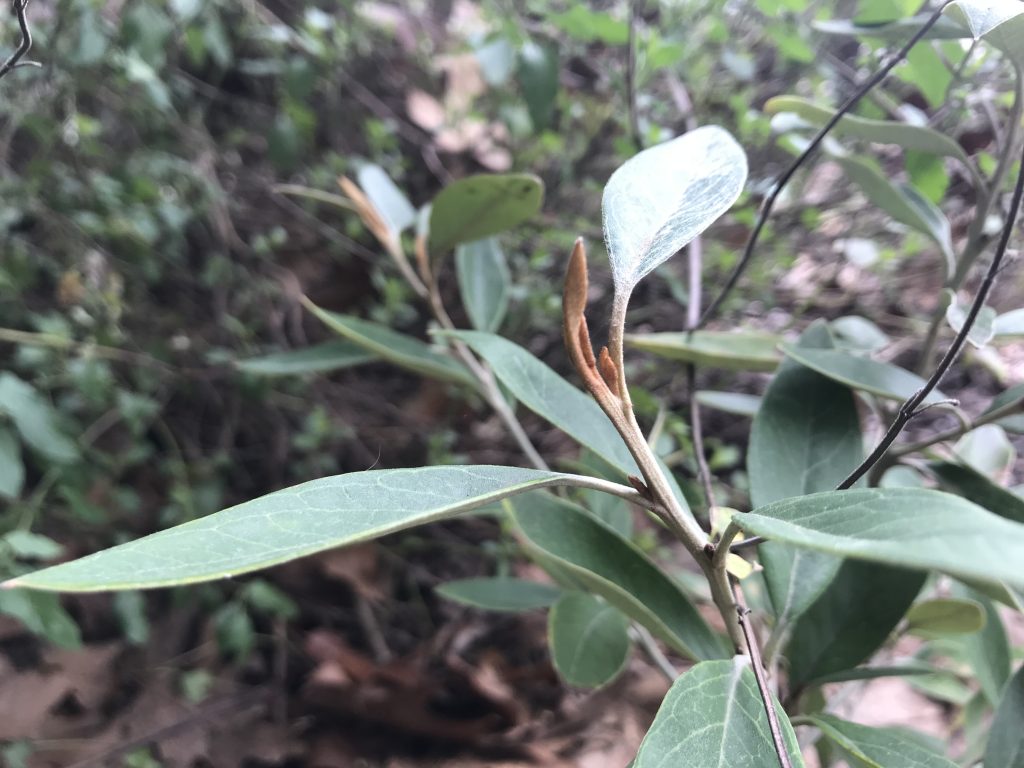 This is just cause I thought it looked really freakin cool.  It’s a cabbage leaf (yeah I grow cabbage in the front yard shut up) that got eaten I guess a while ago? None of those holes look particularly new, I mean look at all the healing that has happened. 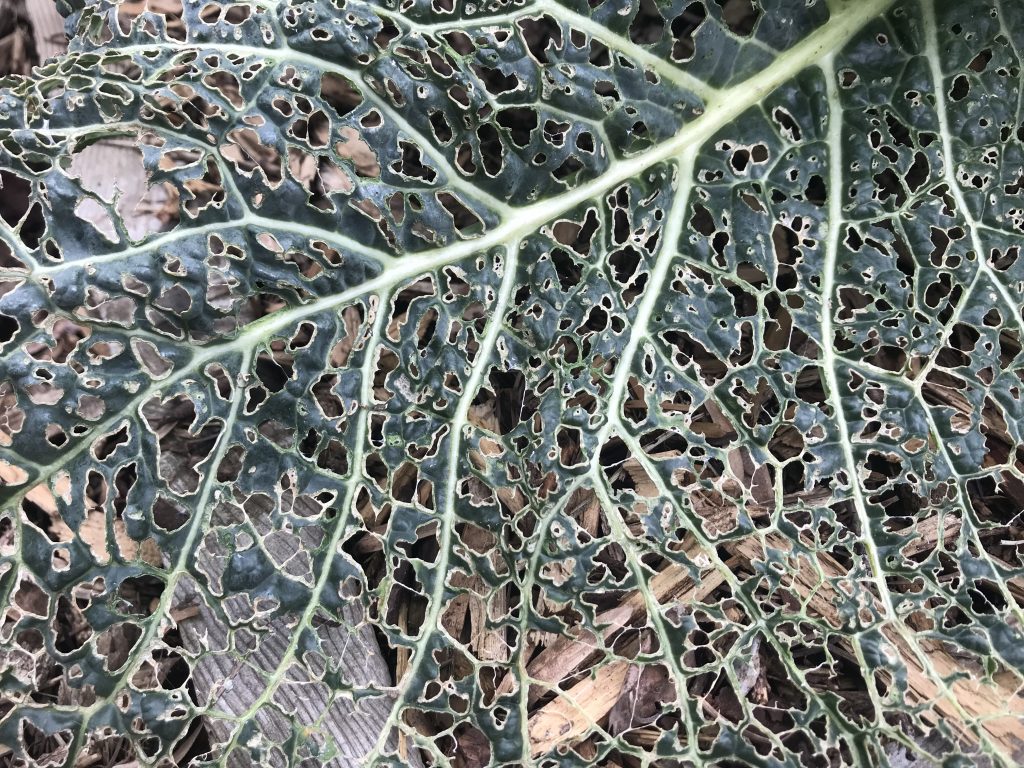 This isn’t pretty but I had to make a record of it.  Snapdragons don’t get killed by zone niney winters. 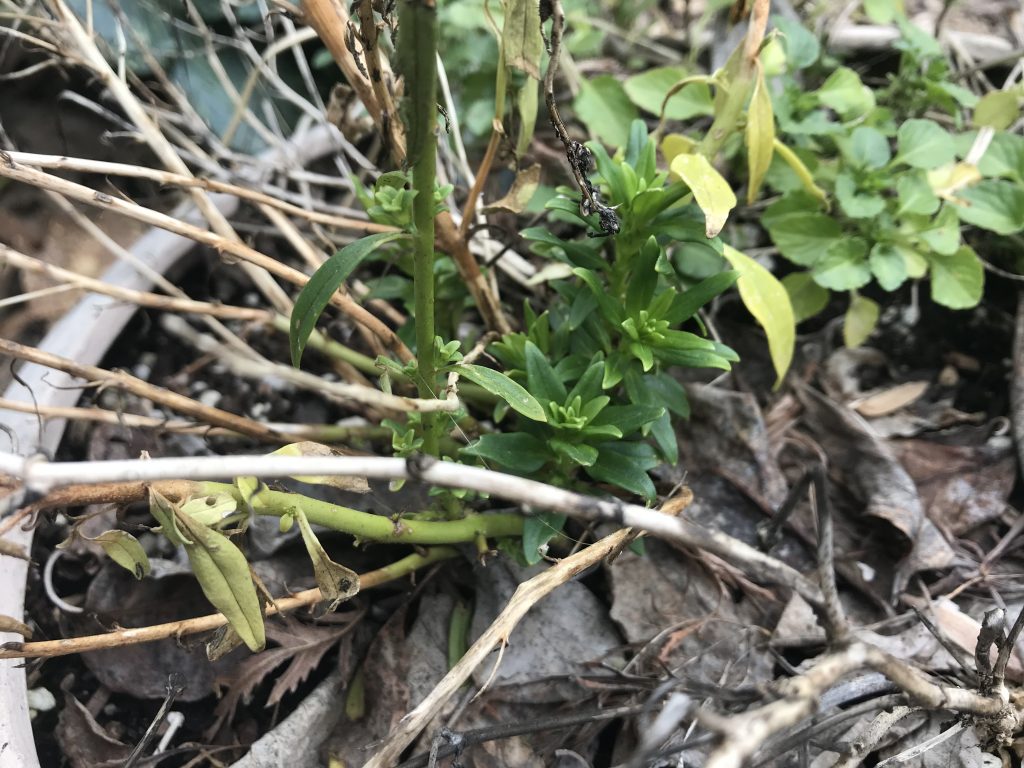 And right along with cabbage I also love to not clear out leaves and dead stuff! My neighbors love me, I know it. Here’s Oenothera lindheimeri.  Which has a new-to-me common name of Gaura, tyvm. 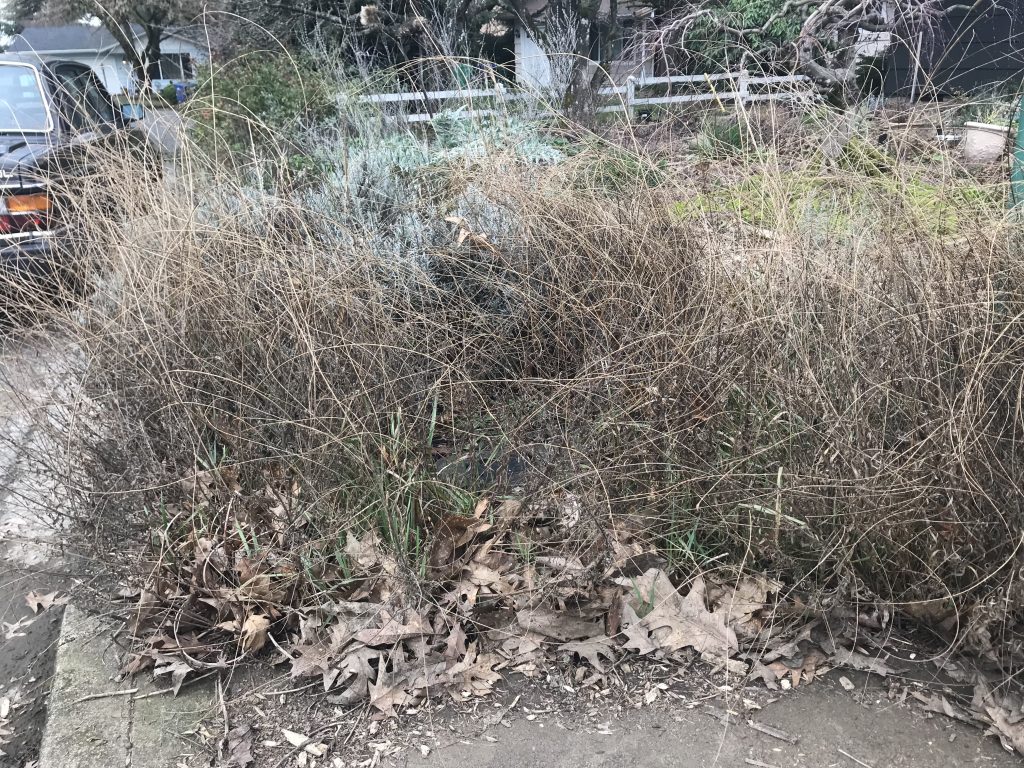 And look! It’s showing signs of life under all those oak leaves and dead sticks from last year! 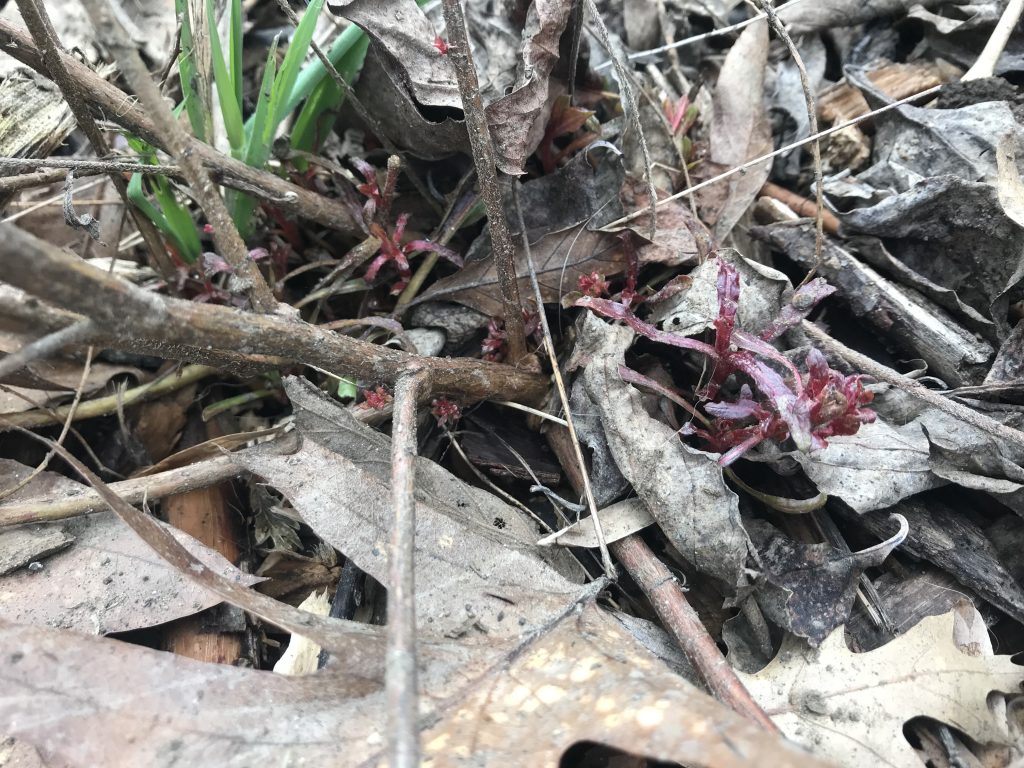 This isn’t leafy growth but while I was looking at gaura this red color caught my eye.  It’s roots of Lysimachia clethroides.  Isn’t that rad? 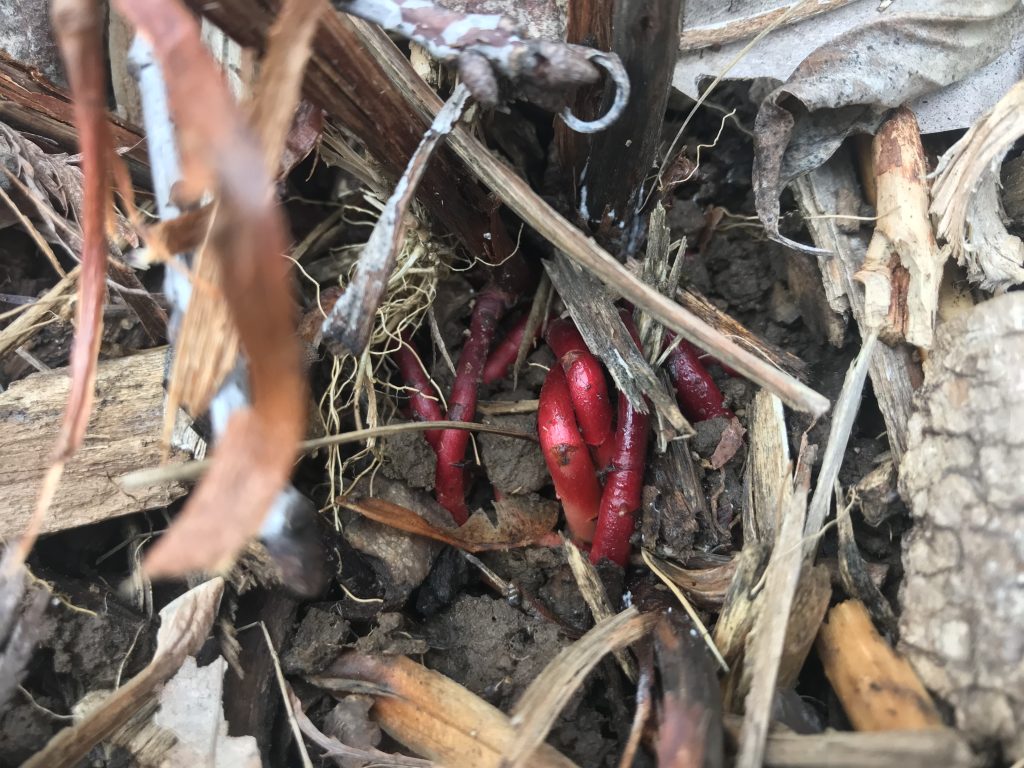 And speaking of Lysimachia, you know what? Here’s yet another great reason to skip the fall/winter yard clean up with the die-back perennials: you can see how much they spread from year to year! Here’s Lysimachia ciliata ‘Firecracker’, coming up in easily twice the area it occupied last year. 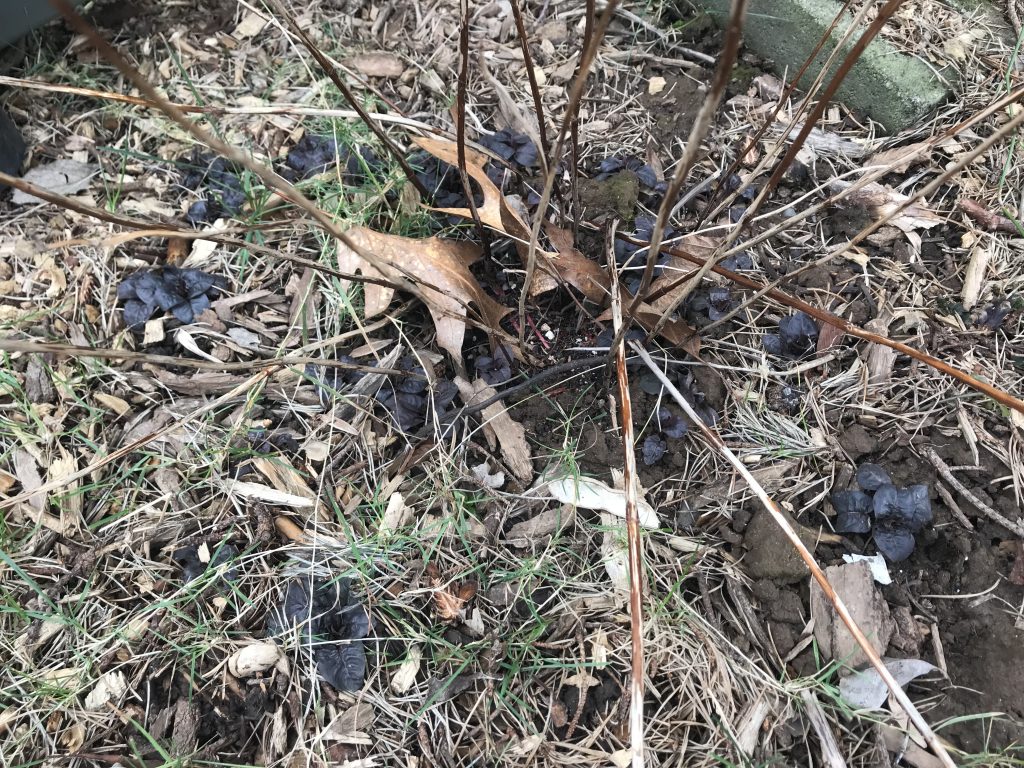 Ugh, I gotta get that grass out of there.

The hellebores in the backyard are in a pot, looking amazing because they’re not getting eaten by anything, but these are experiencing the usual predation; still, a nice flush of bloom. 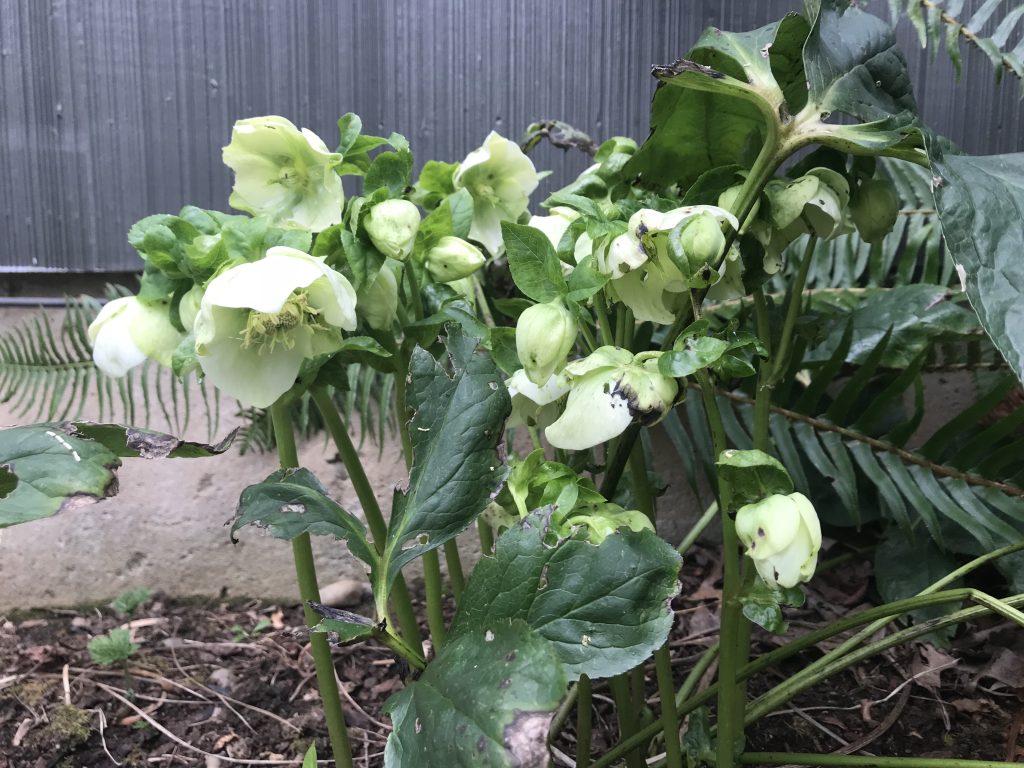 Okay okay here’s the other one in the pot. 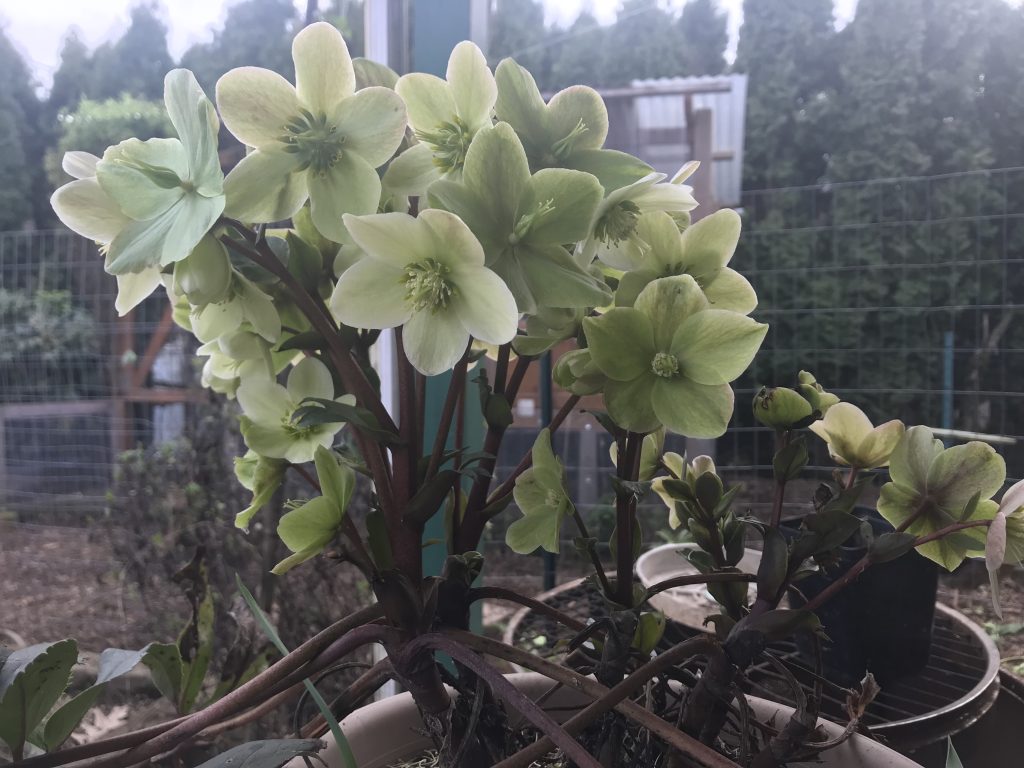 Sambucus is happening!  This is one of the native ones.  I don’t know which.  Right behind it is Rosa nutkana, still sleeping. 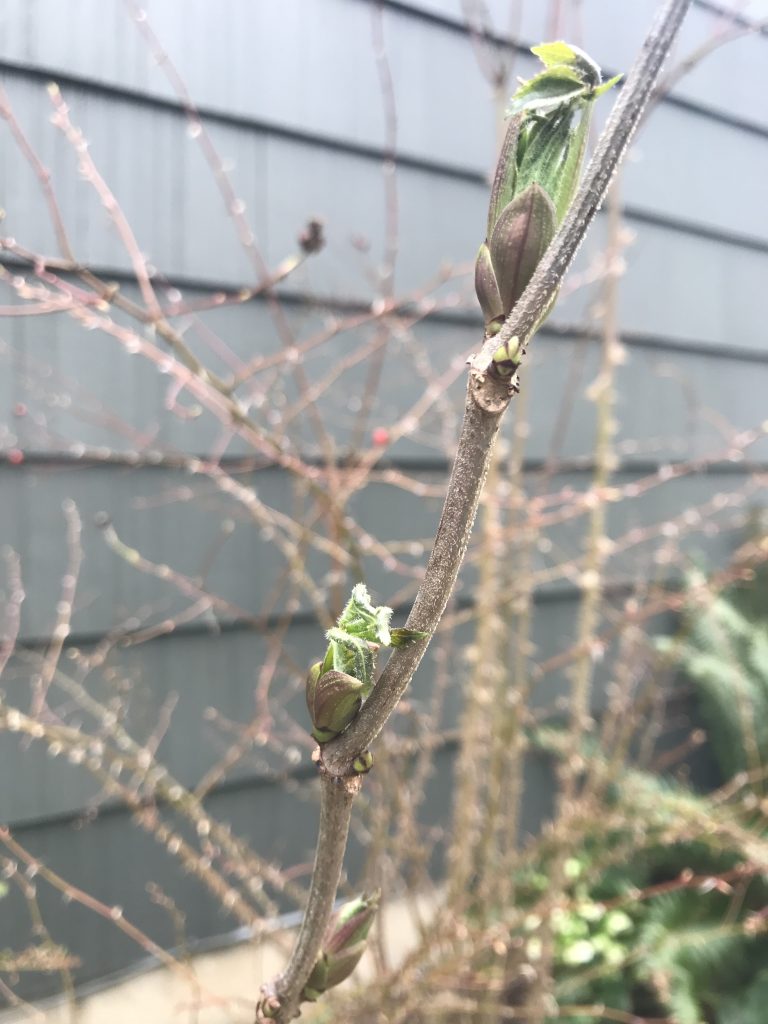 Here’s Dicentra formosa – I don’t remember this ever completely disappearing this year, come to think of it. 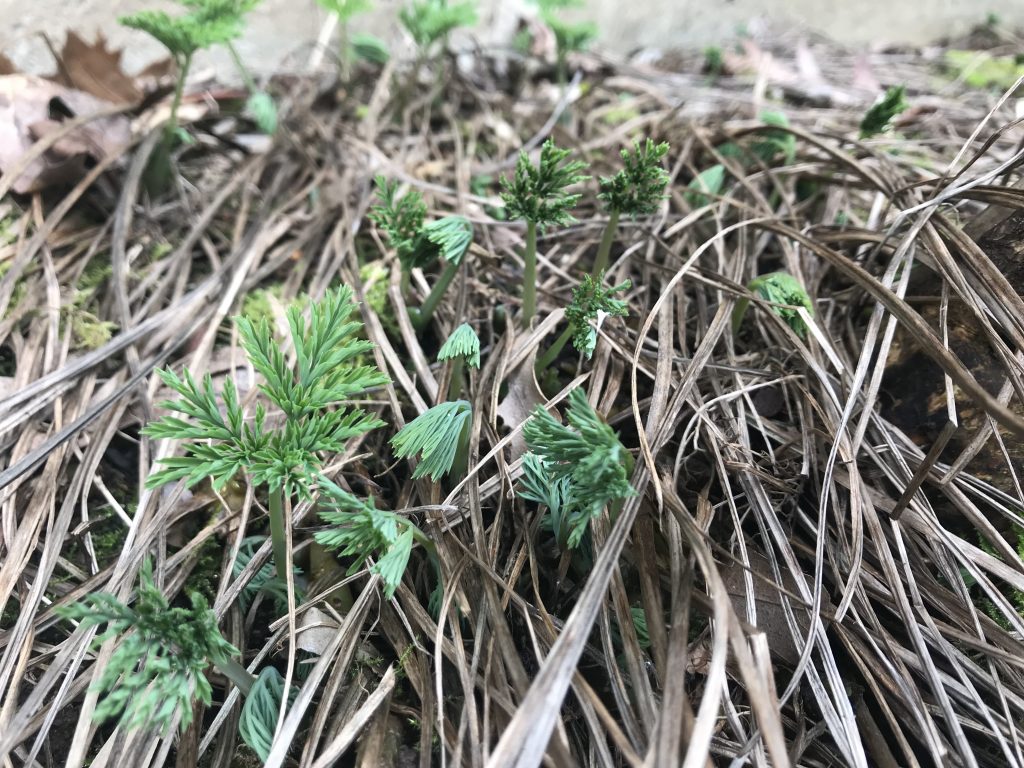 Mahonia aquifolium is working toward flowers. See the spider? 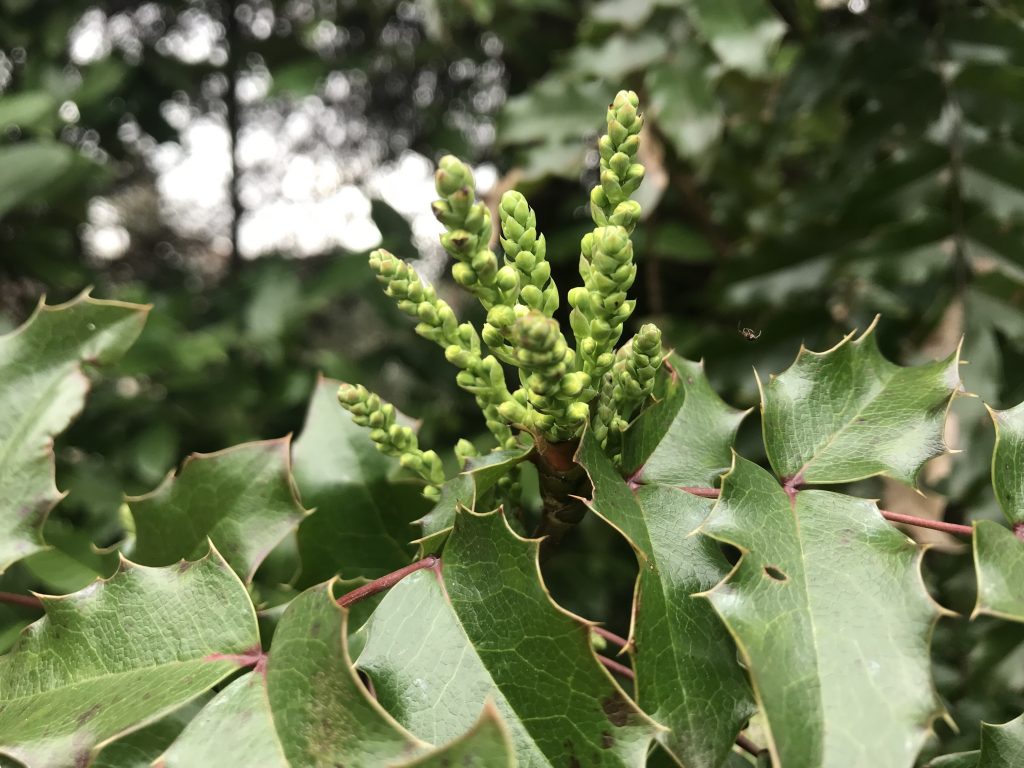 Underneath/in front of it, some tulips are battling slugs and the Zauschneria/Epilobium I planted last fall never died off.  This area was covered in daylilies and they always looked bloody awful by about July so I moved them and replaced them with these.  I put sedum in here too so there will be something green when/if Zauchnerias die back.  We’ll see how it goes. 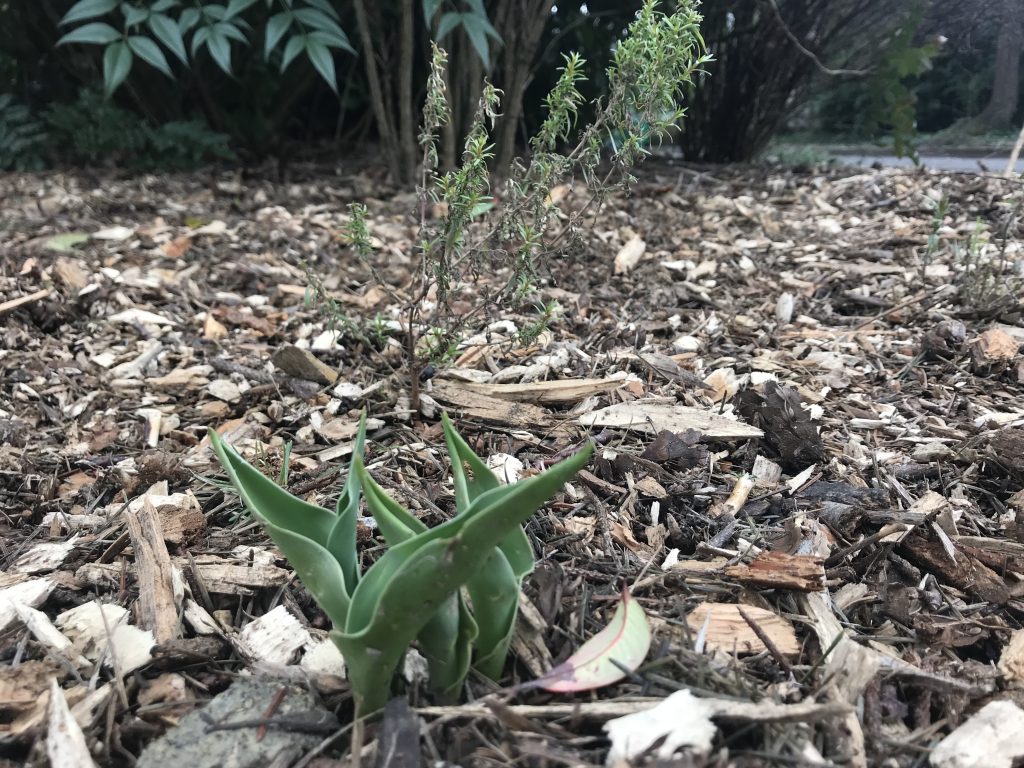 Last one, then you get chicken pictures.  This is Agastache, probably ‘Apache Sunset’ and it never fully died away either.  I just cleared several handfuls of leaves off of it and look at this! 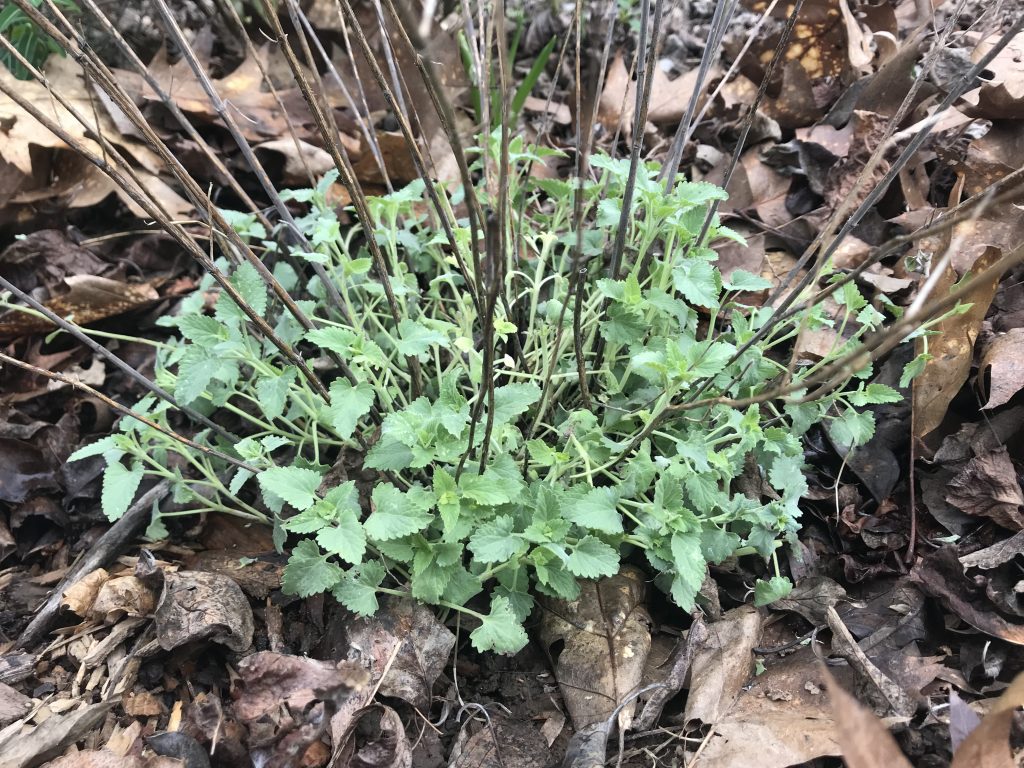 I wasn’t kidding about chickens! Just for fun, this is the mob I have to contend with.  Well, four of the six anyway.

As of now, finally, everyone’s done molting (they all molt annually, usually late fall/early winter, but Pinky started in December and just finished the Longest Molt Ever). We’re getting 2-5 eggs daily (in February! OMG) which includes at least one duck egg.  Now that we have 8 birds total I have a feeling we’ll have some eggs available for sale this year.

And lastly, as promised I did sow 45 tomato seeds about 3 days ago.  Early, yes, but I have a reason: I’m going to try grafting them this year and I wanted to allow a little extra time for what I expect will be an inevitable albeit temporary growth slowdown on the part of the tomatoes, due to getting chopped in half at an early age.

I hope you’re noticing signs of spring here and there too – in your garden, or even if it’s just freeway forsythias, new spring growth is always a welcome sight!