Did you think this would go super-perfect? HA! Did I? Actually, admittedly, I did.

Turns out, other plans were in store!

Ok here’s the best pic I can come up with:

So the success rate on the grafts is exactly 50%.  LAME.

What happened, you ask? I’ll tell you.  The rootstocks failed in that they experienced damping off.  I am nearly certain this was due to me leaving the dome cover on for too long.  Really high humidity and also high temps = they mushed.  The fact that the rootstock stem diameter was generally around 75-80% of the scion stem diameter didn’t help; they had to hold all that up and I didn’t give them stakes initially.

But, whatever, this is why I started and grafted more than I really need.

I started this post on March 8, so two days ago.  It’s now the 10th and things are actually looking even better.

Some of the graft attempts failed completely in that the rootstock rotted and the scion also died. But with some of them, the scions made adventitious roots more or less at the graft point, so where those rootstocks died, I took the scions back off and stuck them in the medium; they’ll re-grow more roots and make it just fine.  These plants are quite flexible.

In the above photo you can see three successful grafts, and the one shorter plant over on the right in back? That’s a scion whose rootstock died, but it made roots anyway and now it’s going fine after being re-inserted into the cell.

So here they are: 9 successful grafts, and another handful of scions that lost their rootstocks.  They all look pretty good at this point I think.  The tall ones here are the successful grafts and the shorties are the scions I re-stuck.  I realize it’s hard to tell who is tall and who is short; you have to just trust me on this. 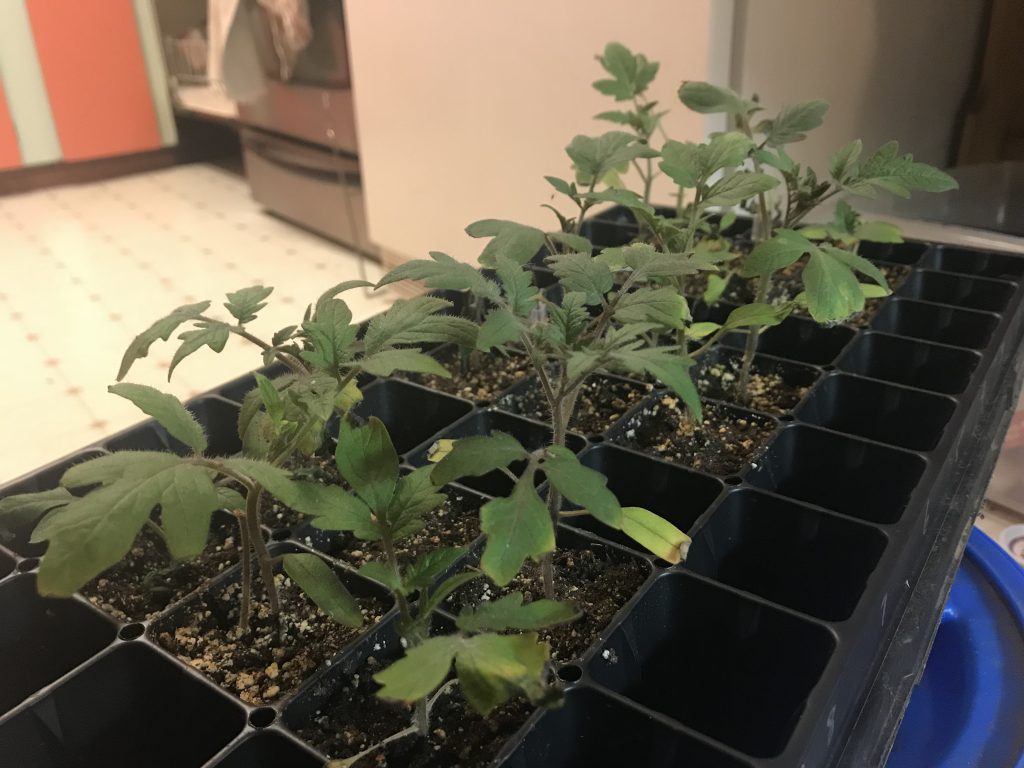 In other news, I went ahead and up-potted the remaining tomatoes that are own-root non-graft virgins; a total of 8 plants and one of them is a rootstock which I’ll grow out because science (it’s actually the smallest one in lower right): 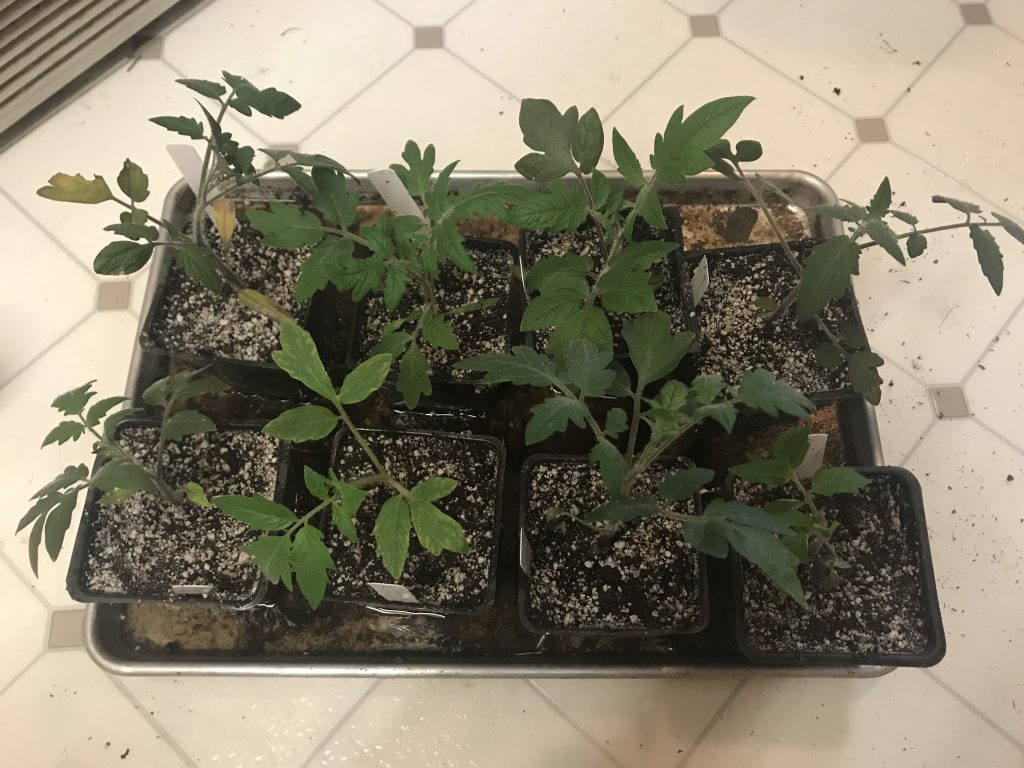 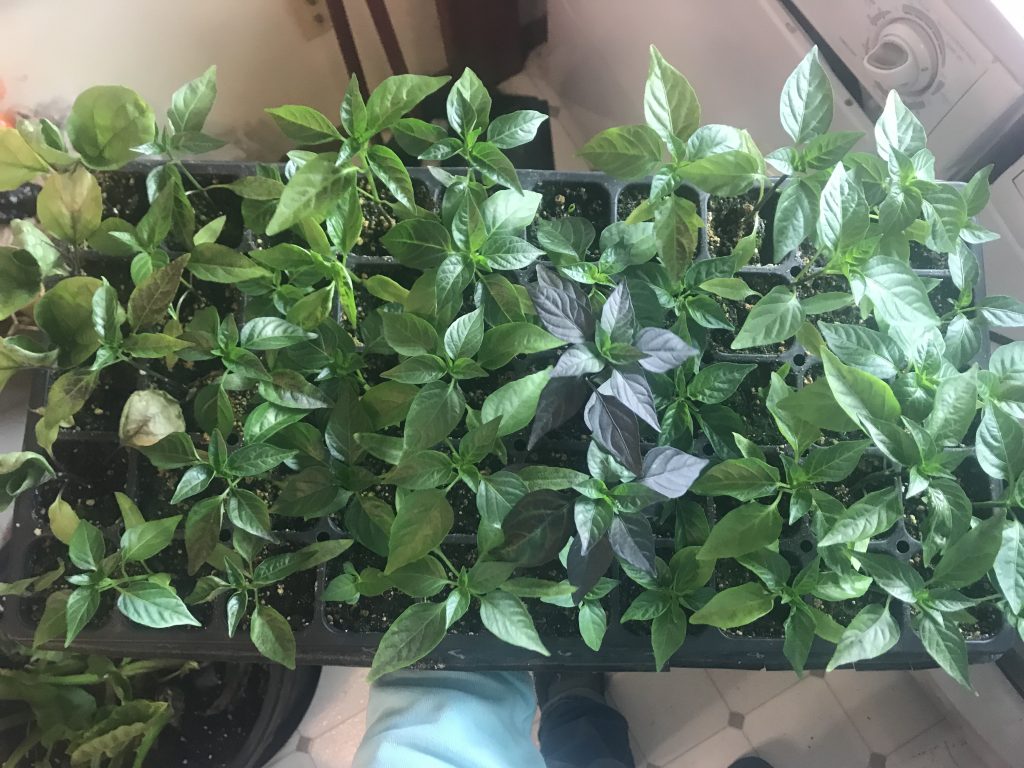 I will have to up-pot those really soon.  They’re all Capsicum annuum cultivars, so I can be pretty loose with them compared to C. chinensis.  They can take more cold, in other words.  On the far left there is a row of eggplants too.

Speaking of Capsicum chinensis, Justin brought me some seeds for super-hots again this year.  I will graft some of these to a set of tomato rootstock seeds I just sowed about 4 days ago (they’re not up yet).  Timing seems key, to ensure that the stem thickness is matched — I hope I’ll be able to nail this; there isn’t much wiggle room with these C. chinensis dudes, since I didn’t get the seeds until February 23.  But hey! We’re earlier than last year.  Here they are:

I expect eventual 100% germination on these, or close to it.  I’m crossing my fingers that the rootstock seeds I sowed will catch up and when the matching diameter is achieved, I’ll graft at least two plants.

And with 70-degree weather coming up tomorrow and the next day I am DYING to do some actual outdoor gardening, as I suspect we all are here in the northern hemisphere! I’m going to set some lettuce and onion/leek/shallot starts out into the front yard.