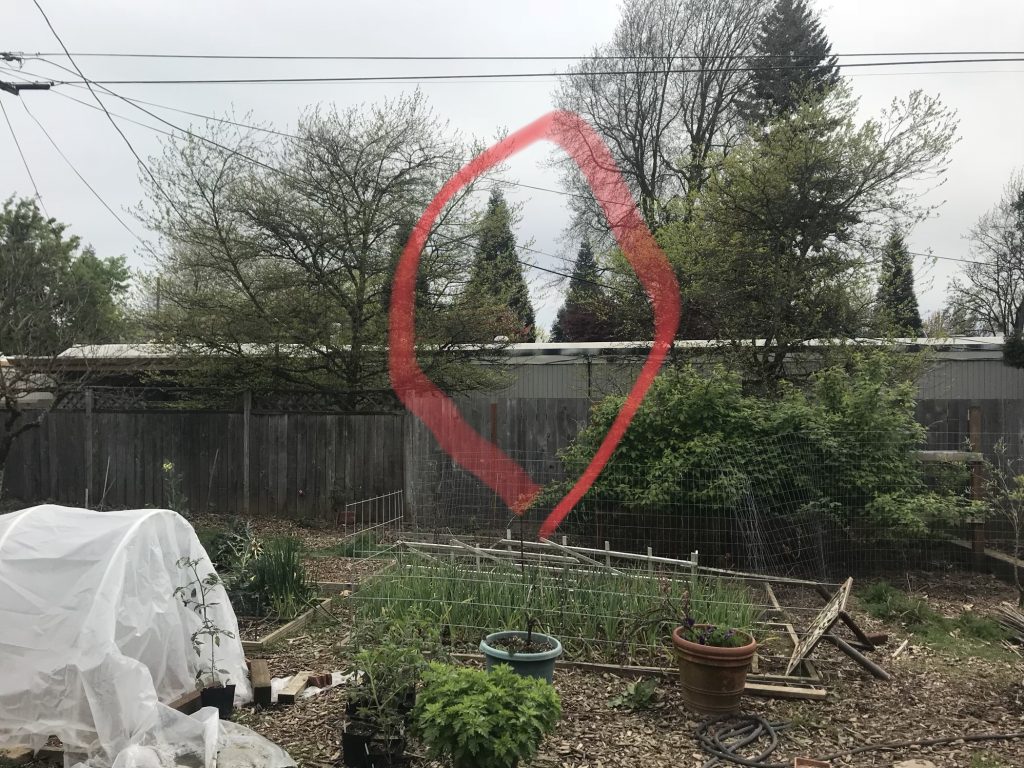 It looks flippin awful right now but just you wait.  There’s so much going on here – hoop house is up with tomatoes NOT in it (what? I don’t know, I don’t work here), there’s fencing and other crap all over the place to keep birds and dog out of the garlic, there’s a big ol’ feverfew that I’m going to put in the ground (it volunteered in that pot and went crazy), grapes that need to be pruned (in the big pots) and of course the big obvious red highlighter mark which is the hopeful eventual outline of a Eucalyptus parvula.

For a long time I’ve been wanting an evergreen tree on my side of the fence right there in between those two Styrax japonicas on the other side.  I’ve considered oak, Arbutus (unedo?), cypress, and various others until it finally occurred to me that (I think) Eucalyptus feels right.  So then it became a matter of selecting the species.  As luck would have it I had a conversation about this with Paul Bonine of Xera Plants while in the car, and not only does he have a lot of experience in growing Eucalyptus, he also knows where they all are around town.  So he took me on a little tour and showed me E. kybeanensis, E. parvula, and several others.  E. parvula won the race handily once I saw the gorgeous one on N. Delaware Avenue just south of Sumner.  Street view here.

Yet another stroke of luck – another friend just happened to have a little E. parvula and he gave it to me.  EEEEEEE!!!

Lastly, If I say it out loud do I HAVE to follow through? I think I’m gonna take out the raspberries.  They are thirsty, hard to harvest, and I have those damn spotted wing drosophila.  Relatively new arrivals to the area, these assholes are responsible for significant impacts to commercial fruit growers.  They are damnear impossible to control and I just don’t think it’s worth it.  I’m halfway though an experiment to see if allowing chickens to forage under and around the plants will reduce populations or eliminate them (adults overwinter in/on ground) so I’m going to see that out but even if it’s successful, I’m still not all that keen on growing these.   Maybe olives…

Wednesday Vignettes come to us from the genius of Anna at Flutter & Hum, so go check her blog out too.