OMG where does the time go!? I’ve acquired a staggering number of new plants in the last month, and I’ve been working to get them all planted.  And of course this is prime time for the vegetable garden and things are really going well.  Here’s an update on some of that.

I seeded carrots and parsnips in here but as seems to be typical of the Apiaceae family in my garden, I got shit for germination.  So I gave up on most of them and set these starts in, which I sowed sometime in maybe April.   Round 2 of lettuce (round 1 is gone, round 3 is just emerging in seed trays in the house).

I sowed these cabbage family babies three weeks ago and they really need to get in the ground, like now. We just harvested all the garlic, so there’s an entire bed awaiting them.  I will have to fence it or the ducks will eat these.

The super-hot peppers are coming along really well – some are starting to get tall and branch out.  Basil barely visible behind it suffered a chicken attack when I forgot to close the birds in one night, but it’s mostly surviving.

Tomatoes are, as usual, insane.  I can’t wait to compare the grafted ones to the non-grafted ones – I hope there is a noticeable difference (to justify the effort, mostly).

These melons look really good.  They really like the wood chip mulch!

I started several Tagetes lucida plants from seed last year and set them out here and there to trial them and see how they grow in different settings.  I didn’t expect them to make it through the winter, but OMG they all came through.  The “un-scientific” name is Mexican tarragon or Spanish tarragon, and it’s definitely easier to grow than French tarragon.  Of course it’s a completely different plant (same fam, tho), so the flavor is a bit different.  I would say sweeter and more anise-esque.  Mountain Valley Growers did some culinary comparisons you can read about here.

Now we’re in the front yard, where I have relegated eggplant because of verticillium in the back.  So far, they don’t get it at all out here.  If they do eventually, I’ll have to start grafting them (I got bigger grafting clips, too, because I’m probably going to do it next year regardless).

The taller eggplants in the back are Millionaire and the shorter ones in front should be Prosperosa.  And yeah, that’s Geranium ‘Rozanne’ doing her thing in the upper right.

I should probably make this next bit its own post but I’ve already done all this so, whatever.  Behold:

No sane gardener would ever grow our native blackcap in their backyard on purpose.  I swear.  What the hell am I thinking? Well, if you’re not familiar with it, let me tell you about this absolutely wonderful western native plant.  Bullet points for you speed-readers.

So what I do, is I treat the thing just like a normal raspberry, except for the tip-layering bit (do not permit unless someone wants a plant).  And the watering (none).  When the floricanes are done, I’ll cut them out at ground level, and at the same time I’ll prune the primocanes back by about half – if I don’t do that they will eat things like my neighbor’s house, and pruning them encourages them to branch a lot, so then I get a more compact-shrubby plant instead of a 20′ long bramble.  Like any raspberry you absolutely cannot leave this plant alone and expect it to behave.  But aside from that, in my book it scores well above normal raspberries (which, as previously mentioned, are all coming out this year).

Here’s the whole plant – see the tall primocanes with the glorious white “skin”? On left, lower, are the floricanes which looked just like these primocanes last year at this time until I shortened them by about half. I’ll have to reduce the number of them this year, too.  Eventually this plant will get some form of support structure.

When/if these primocanes touch ground, they will root.  Right through grass and mulch and everything.  I’m helping this one so my friends Kate and Katie can have a plant. 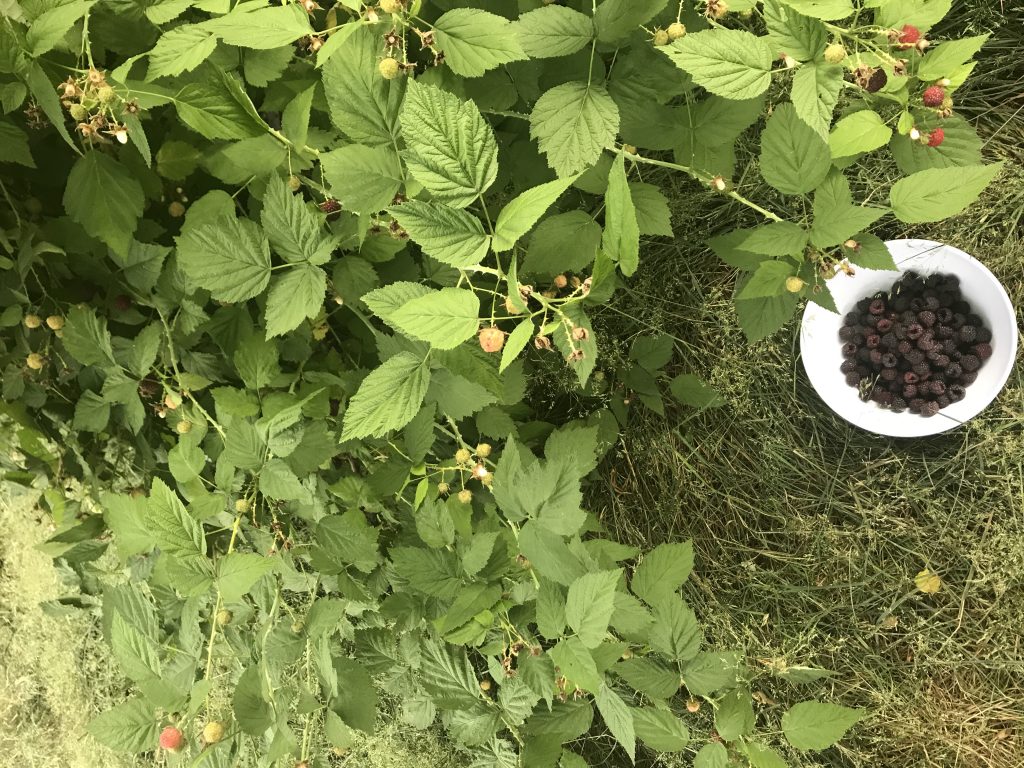 I don’t remember when I discovered these, as a kid, or who (Mom? probably, native Oregon kid that she is) turned me onto them.  But I do remember, every summer, going up into the woods and finding them at the edges of forests, and in clearings.  I had two particularly good patches and if I ended up encountering them unintentionally I’d have to use my shirt, or my hat, or whatever I could find (Acer macrophyllum leaf?) to hold them, because neither patch was particularly close to the house and, being a lazy-ass Taurus, I wasn’t about to actually go back and get some kind of bucket.  We made freezer jam with them whenever sis TJ and I would pick enough.  Rarely straight blackcap jam, though – the best was to mix them 50/50 with red raspberries from the garden. – that was everyone’s favorite.

Freezer jam is the best because, since it’s uncooked, the flavor is much more true to the berry.  I asked Mom about her recipe and what she said is that she generally followed whatever was on the Sure-Jell pectin box.  Pectin and pectin-type products vary a bit in terms of what’s in them, and how they recommend going about it, so the things to remember are (god I love bullet points):

All right, now I feel weird because I’ve strayed dangerously close to the food-blog corner, so just to assure myself and you all that this is still really about plants, here’s another plant picture – The stems of R. leucodermis, as mentioned, look absolutely ghostly and really cool in winter. 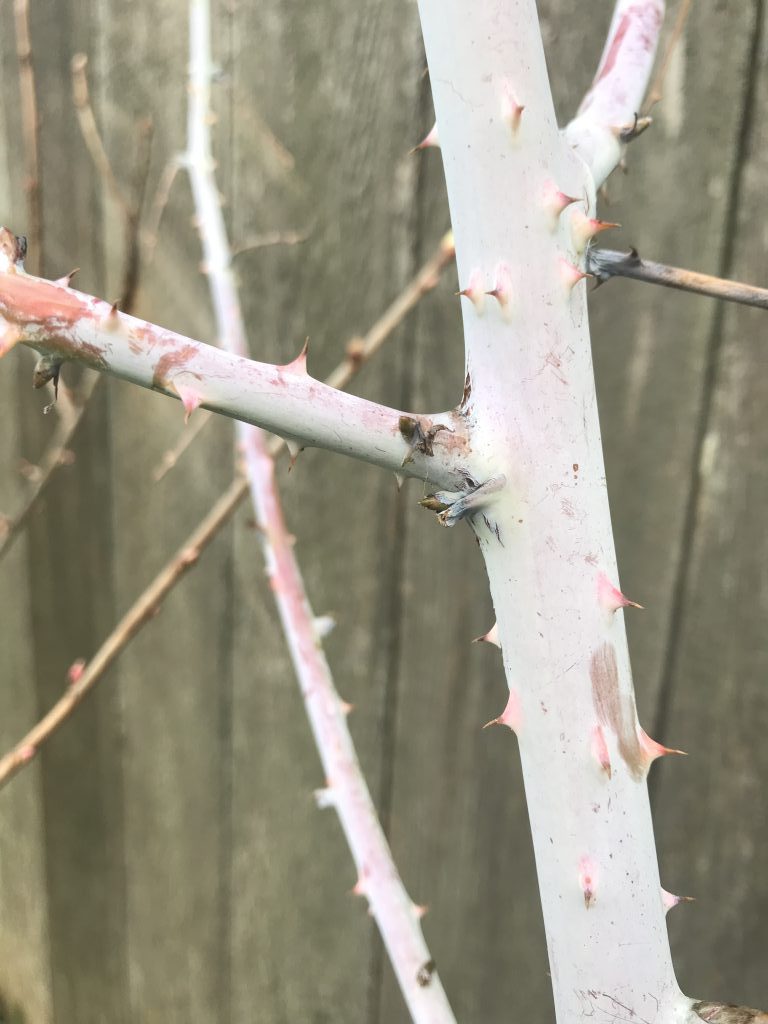