First up is the lime (Citrus hystrix), who looks better than ever before coming out of winter indoors. Last fall it got a re-pot into a more free-draining mix, and, it’s been under an LED grow light all winter. It’s had a great winter, even flowering and fruiting! 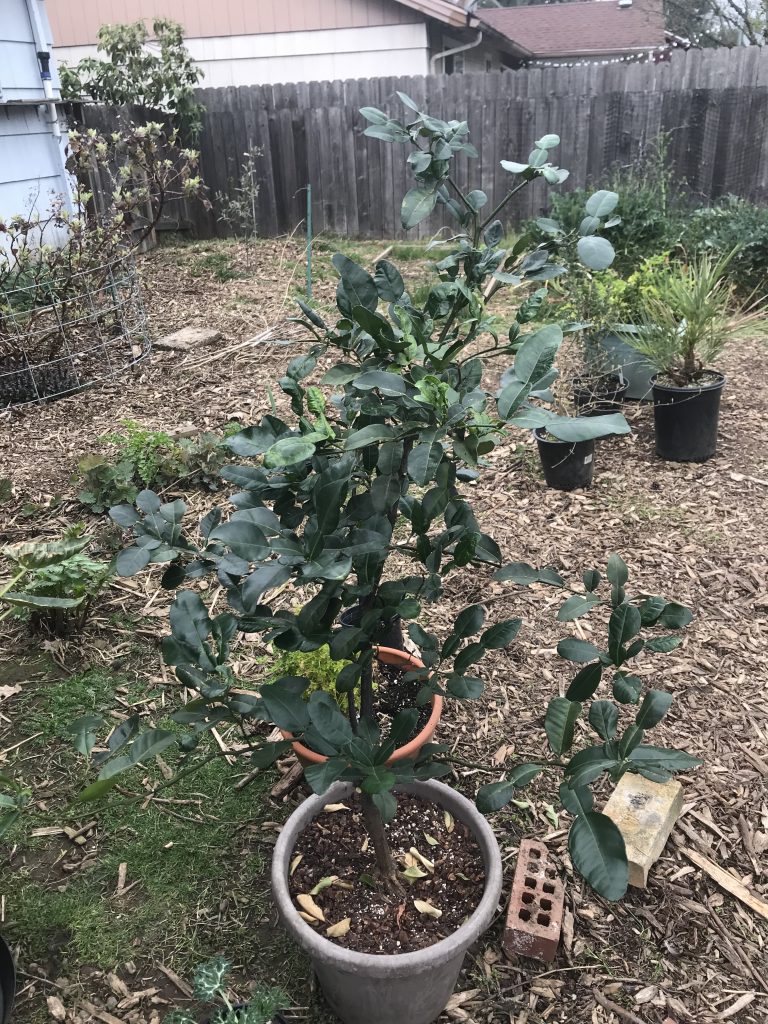 This Colocasia has actually been out here for maybe a week or so. It did not like the 33° dip we had a couple nights ago and I expect it will lose all these leaves. Just as well since they’re all small and etiolated. 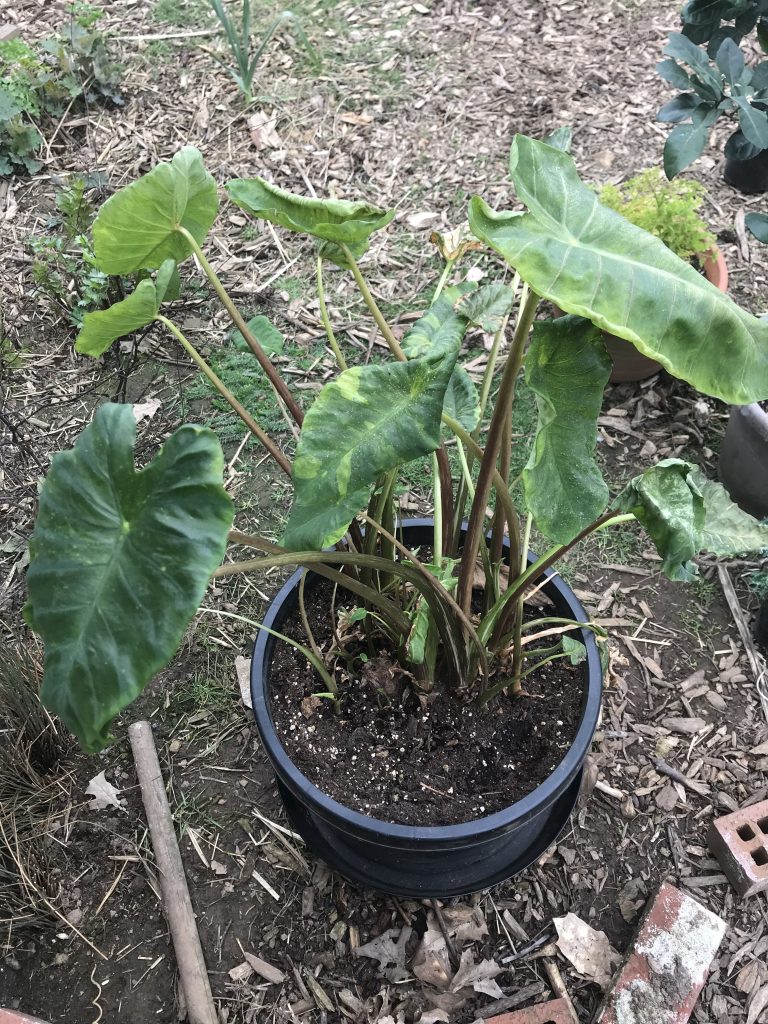 Two of four mature Pelargoniums. The green one is a rose geranium and the other is ‘Vancouver Centennial’ which might be my favorite – although the fragrance of the rose-scented one is to die for. 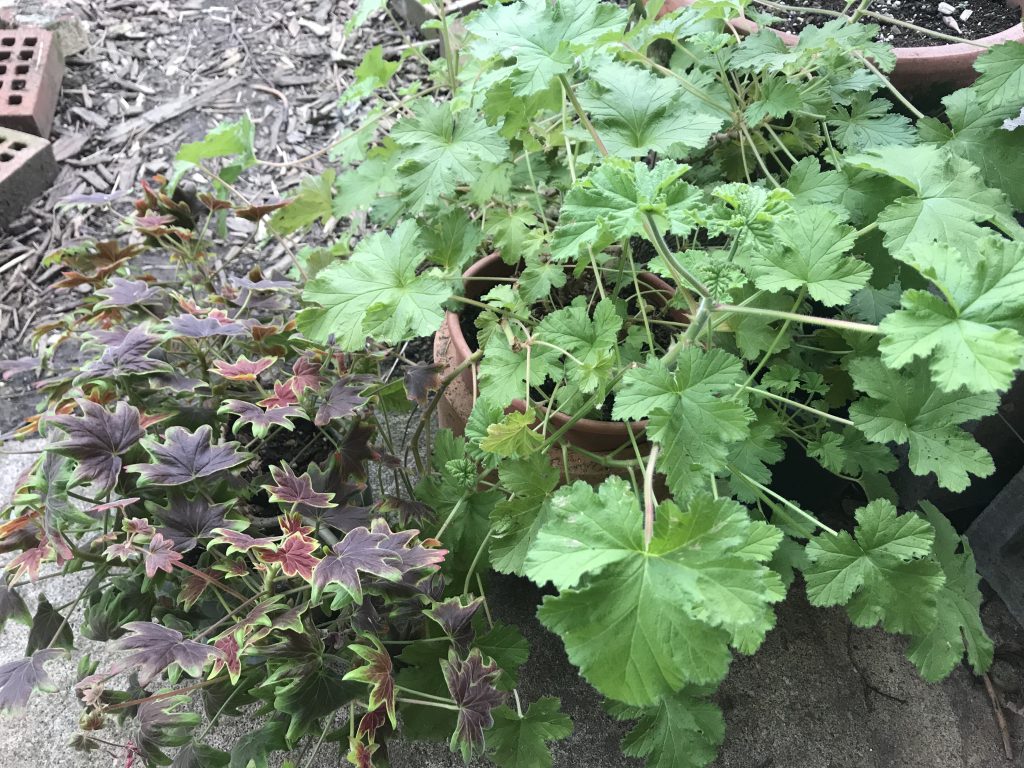 Look at this gorgeous foliage. The flowers are a bright carmine and just stunning against these leaves. 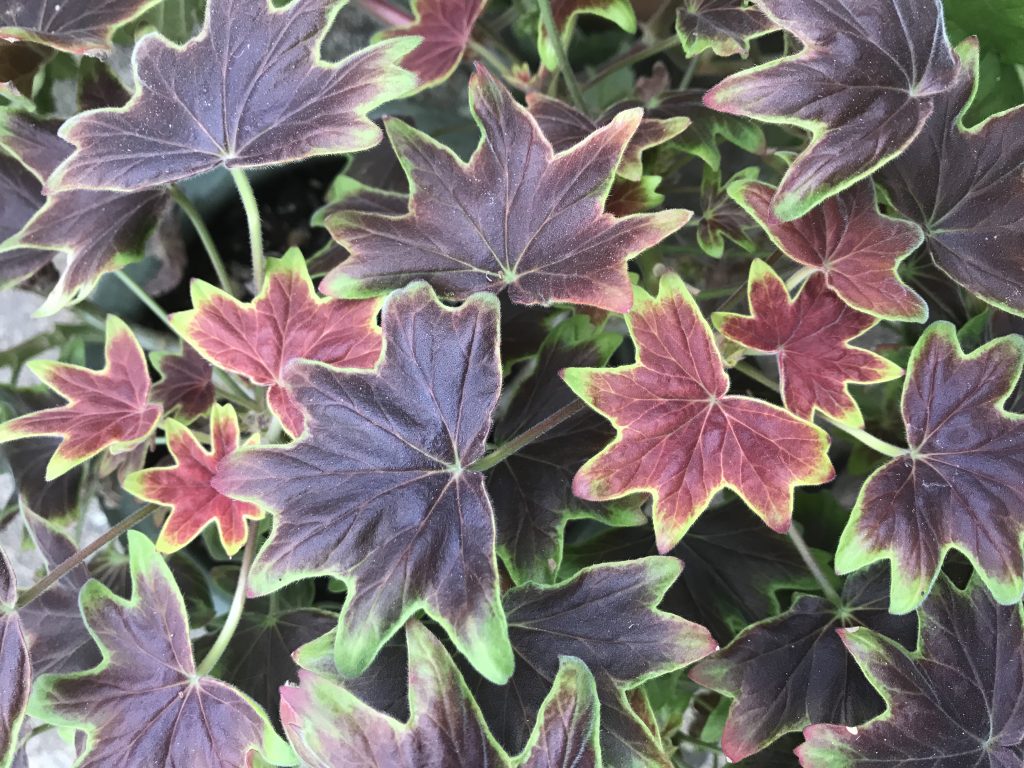 Not pictured are a couple of Monsteras and other indoor subtropicals that I’m taking outdoors only during daytimes for now. Eventually I hope to give most of them summer vacations outdoors – at least, the hardier ones that can take cool summer nights.

Lastly a flat of vegetables that one hardened off and need to get in the ground. I kind of love how these look. 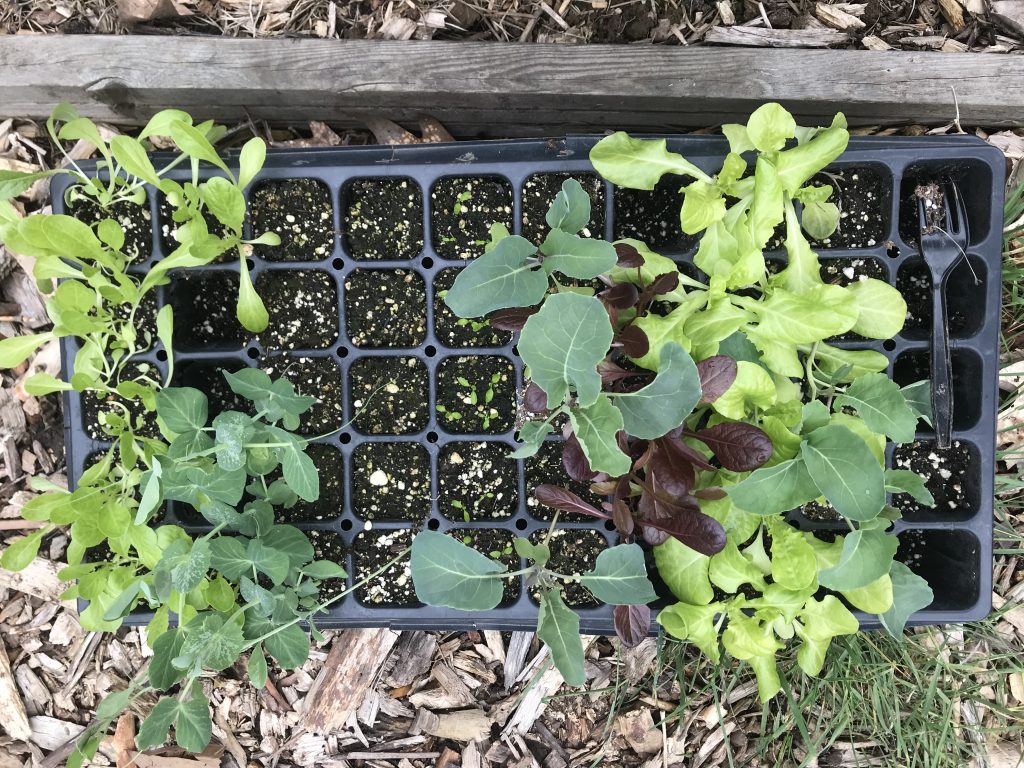 It’s three varieties of lettuce, spring cabbage (Quick Start), peas (Oregon Sugar Pod II), and the single sweet pea that actually germinated of the 10 or 12 seeds I sowed. Not sure what’s up with that but I tried again and set the tray outside so we’ll see.

Apparently we’re in for a bit of a rainstorm with possibly significant wind.  Some people actually put tinfoil over the tops of the pots and around the trunks of their citrus to avoid rainfall causing waterlogging but I’m lucky enough to have a bright covered patio so everyone goes under that if it’s pouring.

Grace’s comment below inspired me to add this last frost date thing, which is better than just saying “April 20” because you can see that it’s a matter of declining probability:

I like that data for 24 and 28 degrees is included.  The link to the page this came from is in the comments below.

Next up: last month’s visit to Little Prince nursery, then we’ll take a stroll around the garden and see what’s happening in the landscape.

This year’s overwintering area has experienced a revamp/relocation.  In previous years, I’ve simply moved tropical houseplants outdoors (where possible) for their summer vacations and then put them back in my house wherever they can fit — hopefully with a reasonable amount of window-light.  But this year, I decided to kick it up a notch.  Yes, there’s some back-story.  I’ll explain.

I do quite a bit of vegetable gardening, and I start almost all plants indoor under lights.  My area for this has historically been right above my washer/dryer which is in a closet off the side of my kitchen.  I’d been using regular shop light fluorescents (two of them) until May of this year, when I finally got a T-5, which is brighter and better! But that posed a problem I hadn’t anticipated: heat.  WAY too much heat! Because it’s a closet-type space, there was nothing I could do to bring the heat down – there just wasn’t enough air circulation capacity even with a fan.  Terrible for things like spinach and fennel, although fine for Solanaceae members such as peppers, tomatoes, eggplants.

I thought about this long and hard and finally decided that the best course of action would be to move the T-5 into my office, which is one of the three bedrooms in our house.  I did that, and then put the regular shop light fluorescents back into the laundry area; they won’t be needed until I start next year’s crop of veg babies anyway. It’s easier for me to add heat than to take it away, in that location.

So here’s what the office looks like right now.  In addition to the T-5, I have one red/blue LED lamp over in the corner for my citrus. 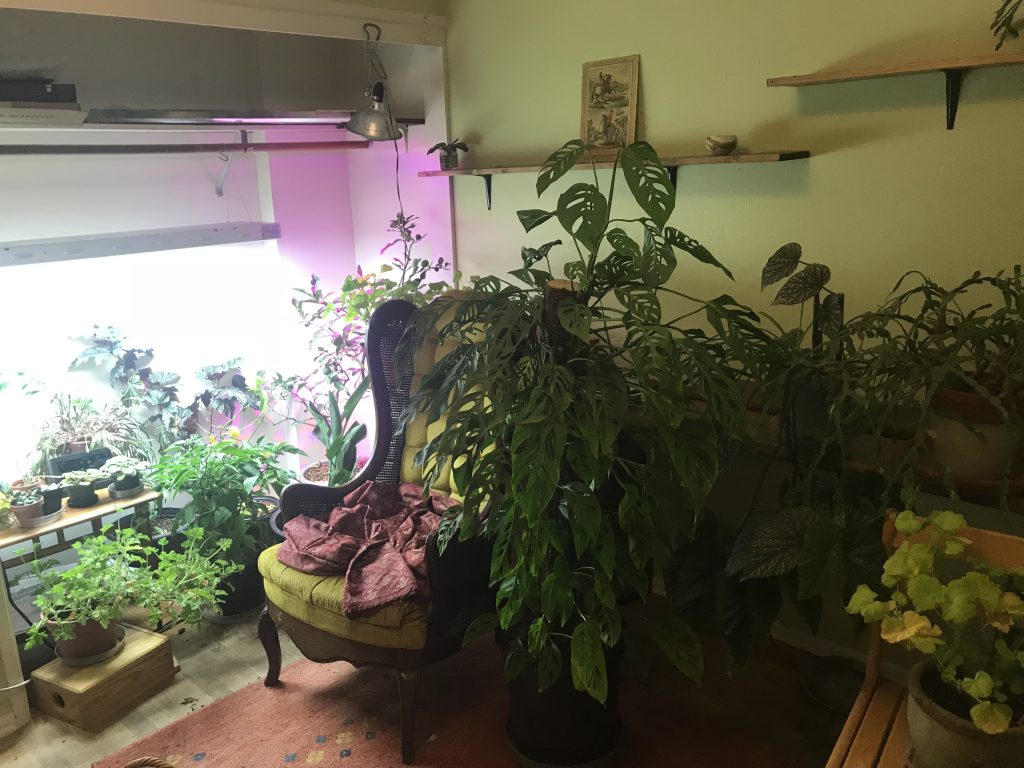 The chair belongs to my cats.  When I’m writing these blog posts, this is what is behind me; my computer desk is on the other side of this room.  The room has an east window and gets some actual sunlight in the mornings (if there’s sun).  It’s also the coldest room in my house. But the T-5 might change that… 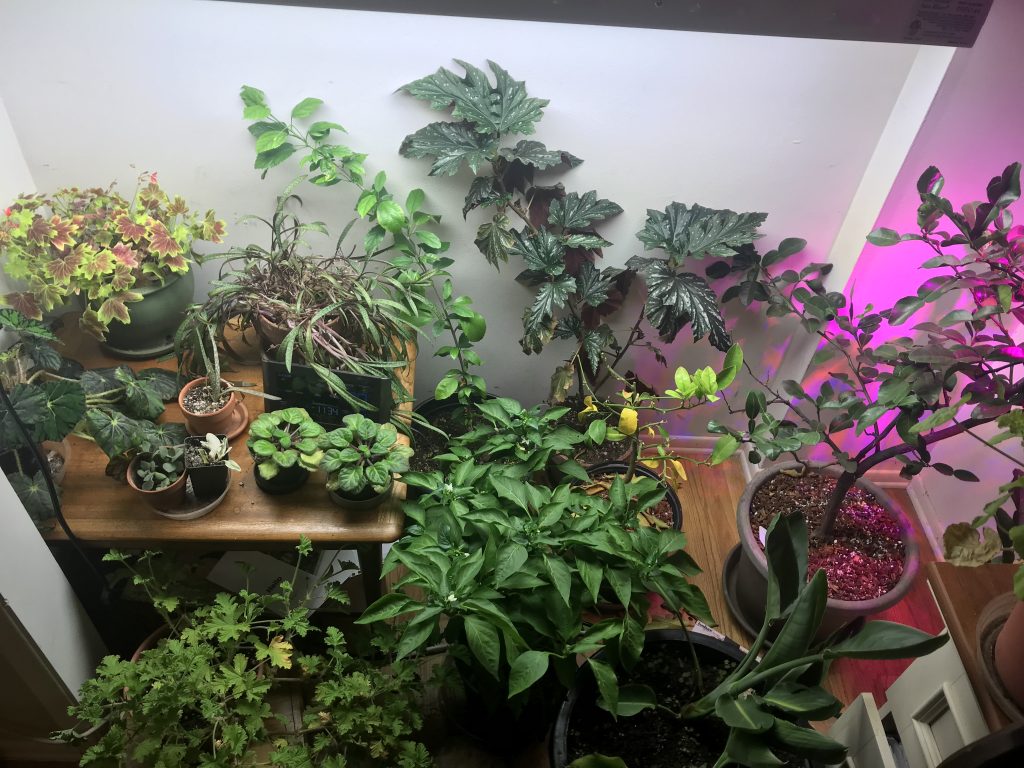 Actual closet plants.  Two of these are plants I’m overwintering for a friend who has less indoor space.  Those are the Hibiscus schizopetalus (middle back, single-stem thing leaning leftward) and the Strelitzia reginae which is lower right here. 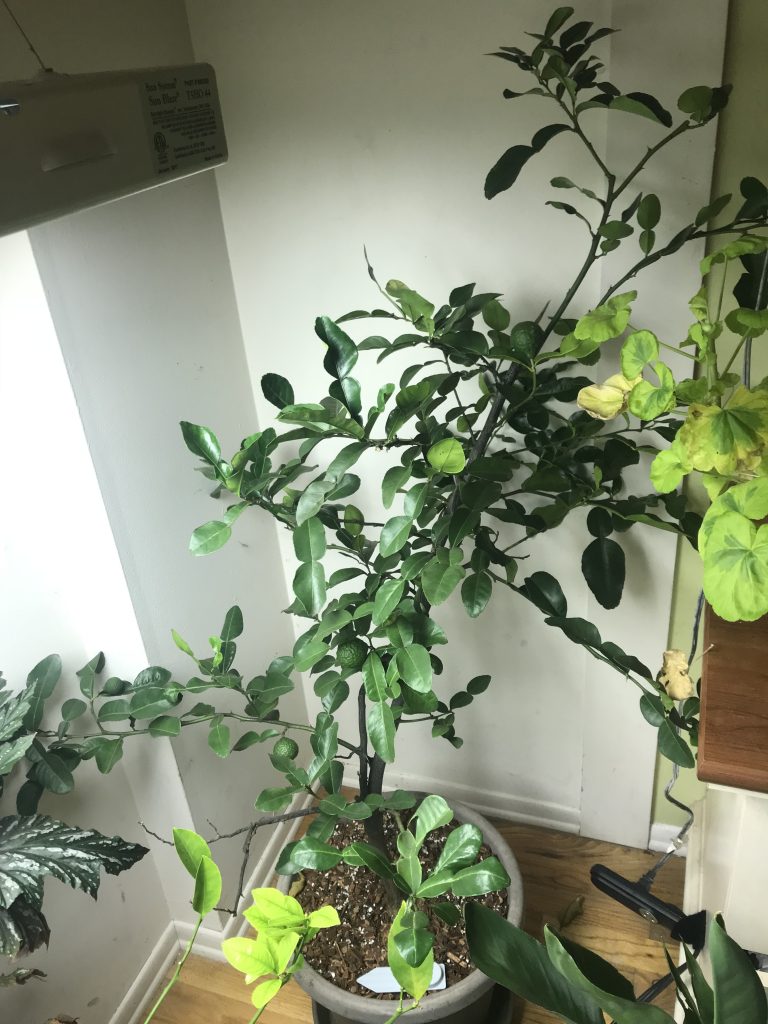 Above is a terrible picture of my very favorie plant: Citrus hystrix. I got this almost 10 years ago from Four Winds Growers.  It’s been a wild ride ever since, but this plant is a real trooper and it’s the very first year it has produced fruit to maturity! I’m so excited about that I even got a close-up of just the fruits, with all their knobbiness:

Then there’s the Meyer lemon I received only a couple months ago, also from Four Winds.  It is not looking good.  My friend Paul thought this was a case of “hothouse shock” (I think?), which is when something is grown in really ideal conditions and then gets exposed to more variable conditions and croaks.  I believe it — it looked great when it arrived, but despite all my efforts it has been steadily dropping leaves and declining ever since.  If it dies, this will be the THIRD Meyer lemon I’ll have killed.  Ugh.  I’m about ready to give up. 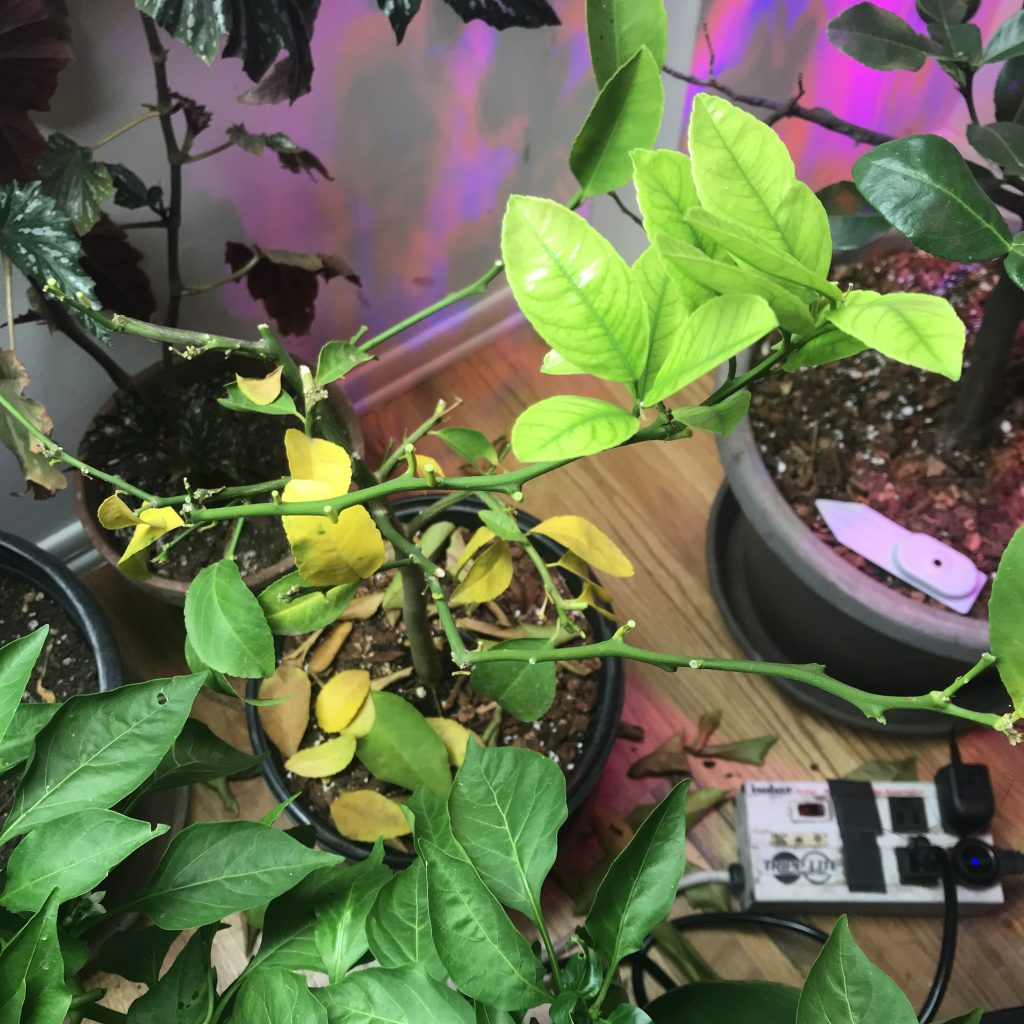 But I’m happy about this.  This is a pepper that I started from seed bought from Territorial Seed Company, out of Eugene area, where I tend to buy all my vegetable seeds.  It’s a mild pepper, no heat actually, variety name is “Yum Yum Gold” and it was a great plant that seemed like the right one to bring in.  I dug it up, washed the native soil off its roots as much as I could, potted it up into Sunshine mix #4, removed all its fruits (there were a LOT!) and here it is a month later, looking awesome.  I’m trying to learn how best to overwinter Capsicum because I want to get good at it with the C. chinense super-hot varieties.  They take longer to mature so overwintering seems likely to be advantageous.. Anyway, this is an experiment with this C. annuum cultivar.  We shall see. 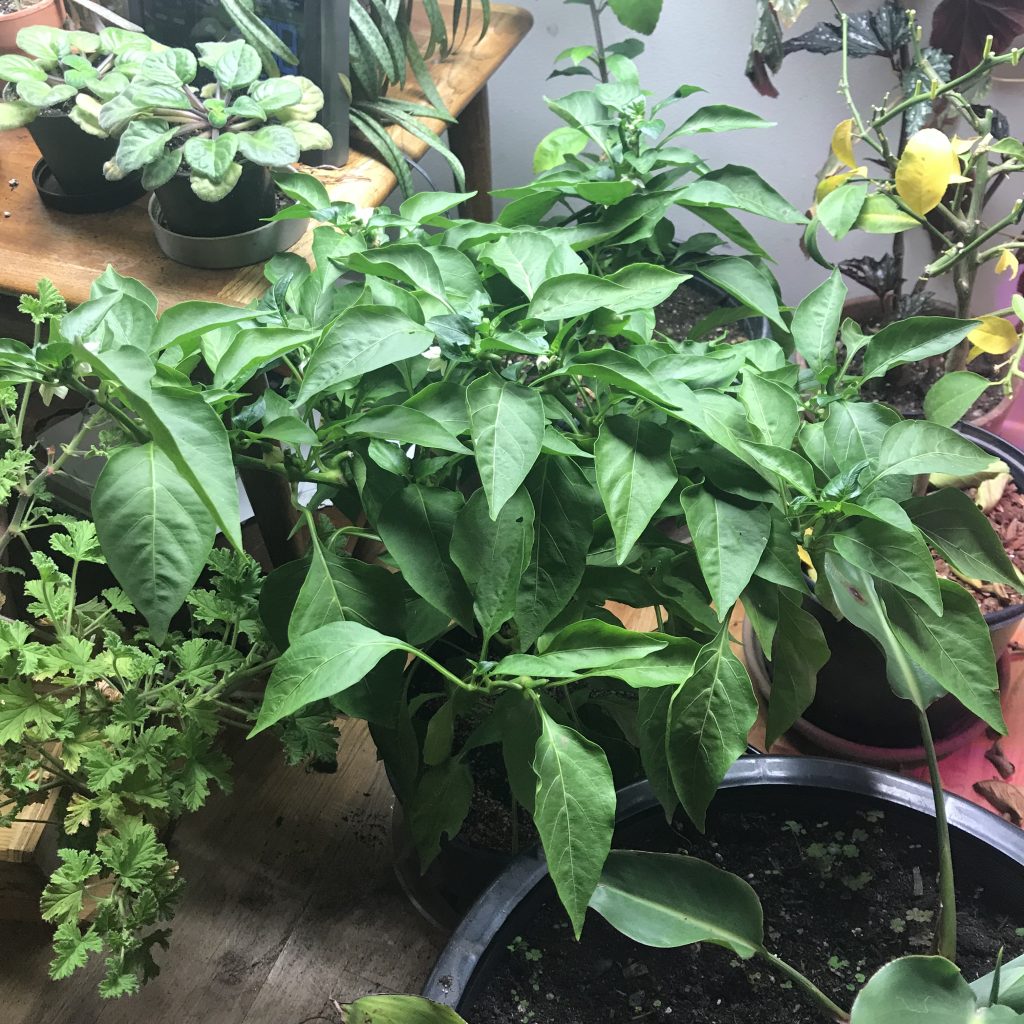 Lastly, for this post, here’s a little update on the Saintpaulia that was featured in my very first post on this blog.  It’s doing great! Not wilty anymore, and I couldn’t photograph it so you have to take my word on this, but it has already sprouted a couple of little roots off the crown.  Ahhhh… 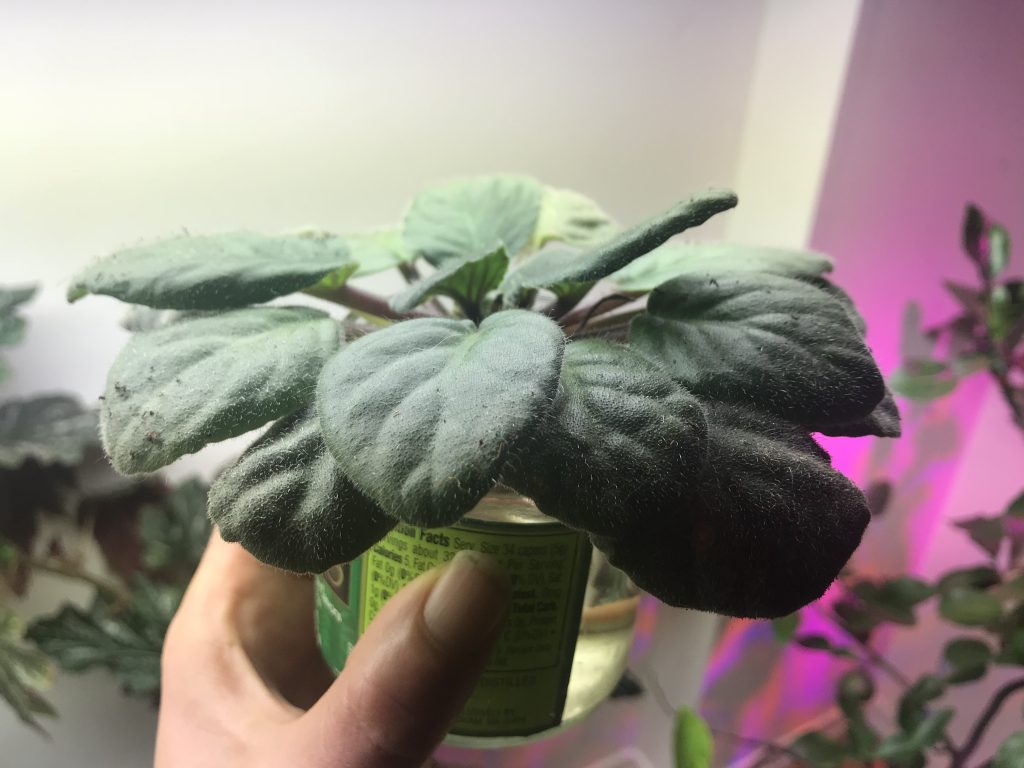 Thanks for reading.  See you soon!

How the hell do you actually start a blog? I’ve had various forms of blogs over the years, but nothing really for serious. Now I feel like I’m going to get serious, and I have been thinking for days about what my first post should be.

A before and after of my house? Well, the after isn’t all that great right now. But you love works in progress, right? I’ll definitely do some of this sort of thing.  An explanation of my experiences of gardening in my new to me house that I’ve lived in for three years? That’ll happen too, perhaps next post.

Tonight I was in my office room, and I decided to do something about an ailing Saintpaulia.  Earlier today in Facebook land, we had some great conversations about drainage – I was worrying about Manzanitas, Australian plants, and various others I’ve collected this summer and now need to put in the ground. And then here’s this little plant. It’s just an Orange Box Special (I rarely buy plants there but one day several months ago this one followed me home. It has been flowering for me quite regularly and even now, and its current state of distress.

But I want to explain to you why the Saintpaulia is important. As an introduction to me and my garden blog, I think it’s appropriate to explain that the very first plant that got me into gardening was of all things Saintpaulia.

When I was a kid, somehow I got entranced with them. I tried so hard to grow them, but the house that we lived in had wood stove heat and very bad light. You can imagine how that combination of very dismal humidity, rapidly changing temperatures, and crap light made it very difficult to grow these things.  I’ve since almost never been without one.  I’ve killed many, propagated many, but I would never consider myself any kind of expert with them.  I just like ’em, which is weird because I don’t really like anything else in that plant family.

Anyway here she is, this evening.  In this pic I have removed the plant from the pot it was in.  I suspect poor drainage and maybe overwatering caused crown rot.  Look at these droopy leaves.  Major drought stress. 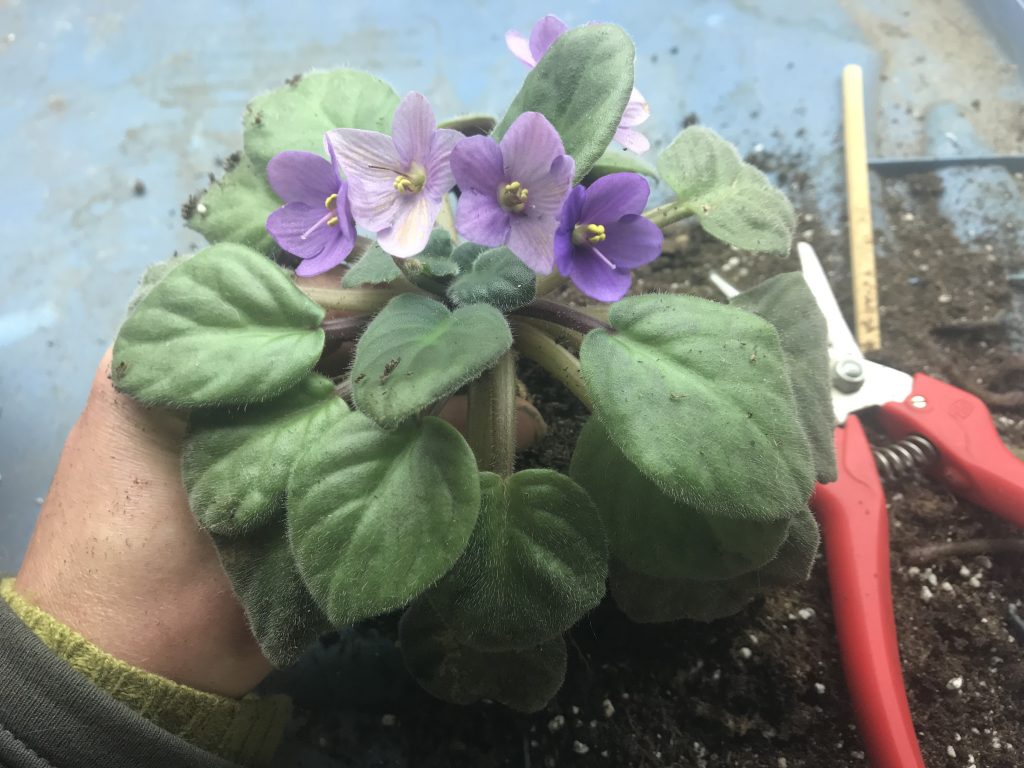 I started to prick away at the root mass with my handy chopstick. These roots are looking possibly dessicated. 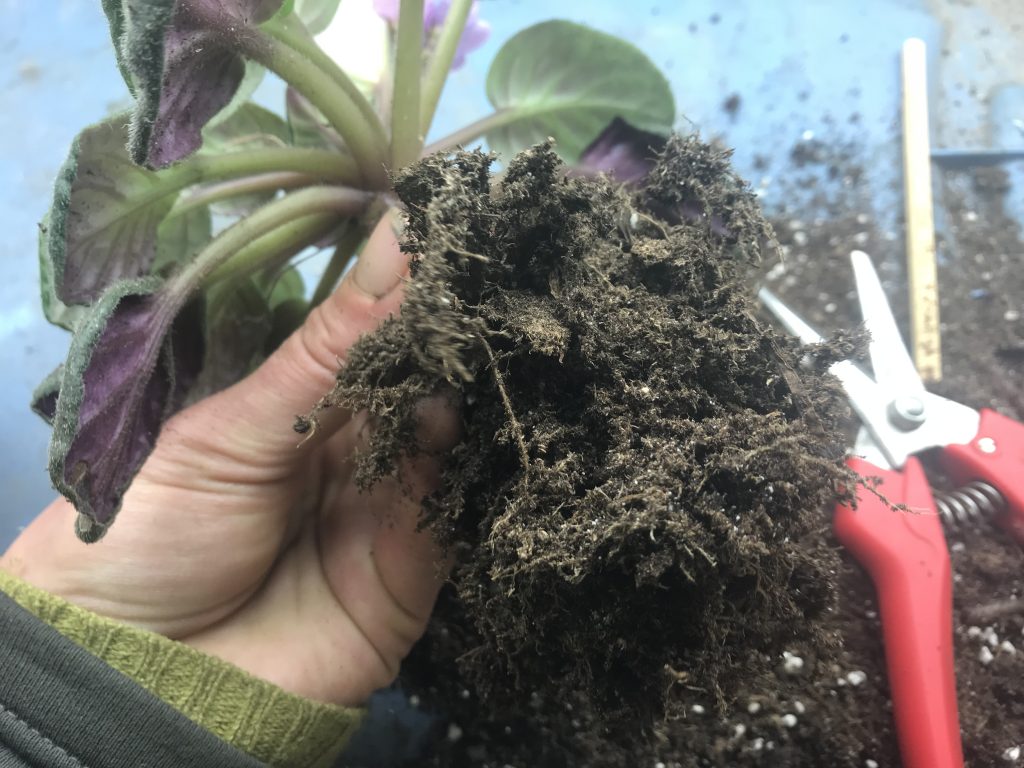 I pulled off a dessicated leaf stem that was attached pretty low, and look at this dark HOLE that was left! 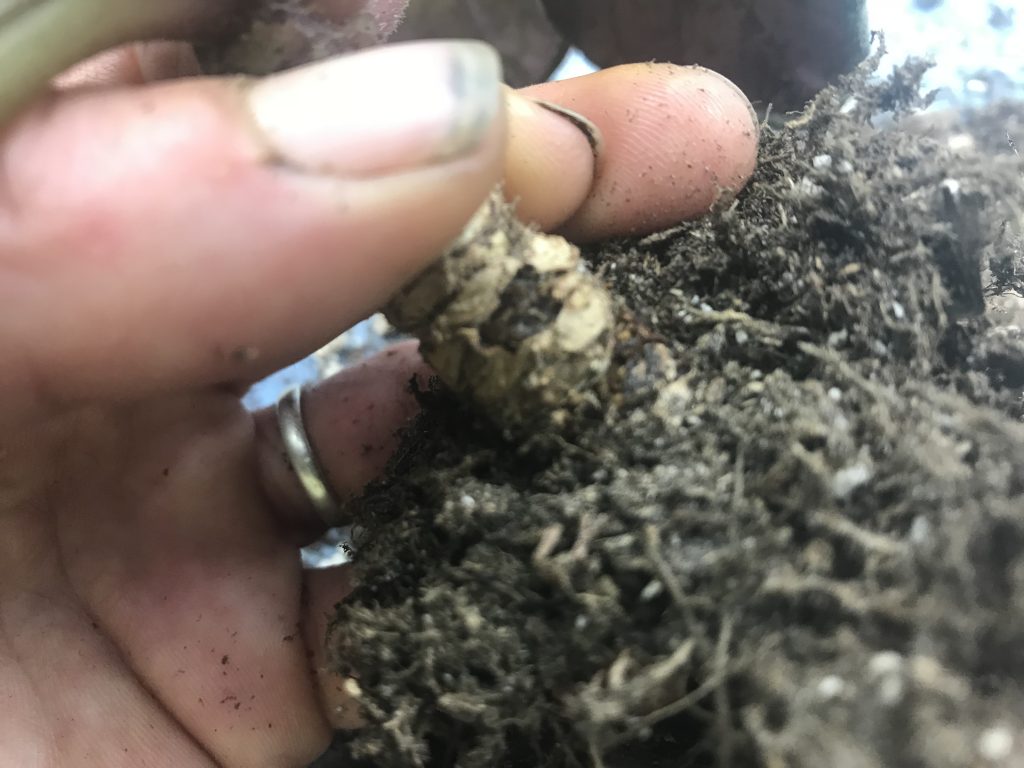 Absolutely no question: this is evidence of crown rot and I have to cut that thing NOW.  So I did. 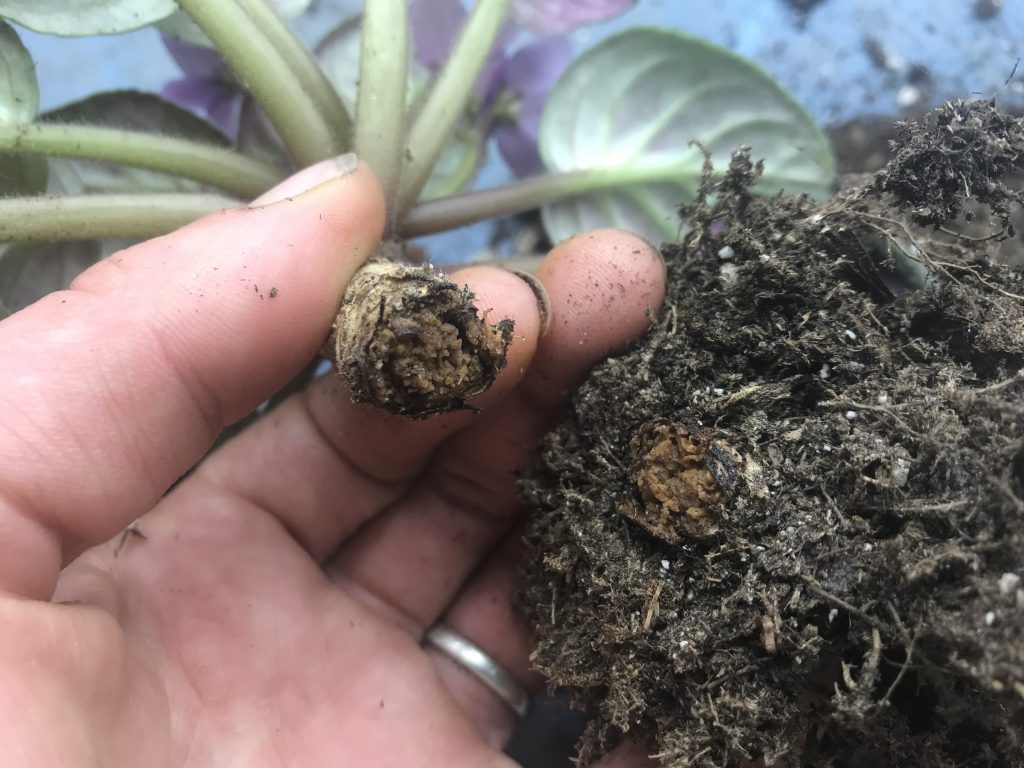 Oh you poor plant.  How long has this been goin’ on?  I cut until I got to something that looked alive. 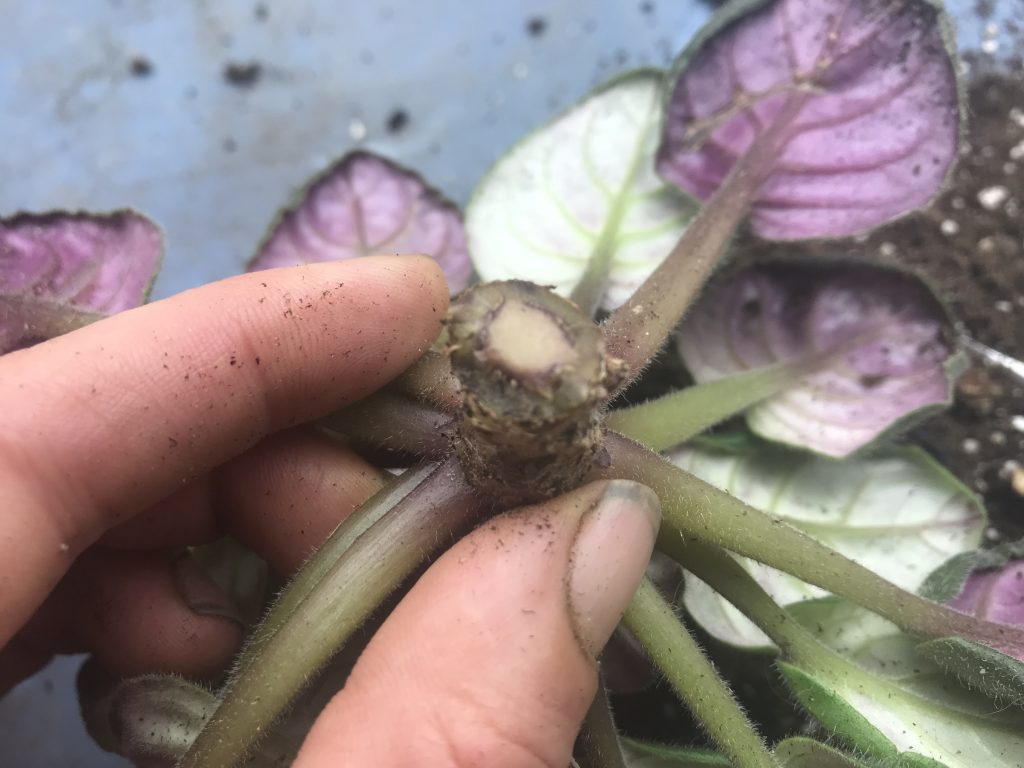 Then I put the thing straight into a jar of plain water.  These guys don’t need rooting hormone.  I set it in a low-light area and will pot it up once it gets roots going. 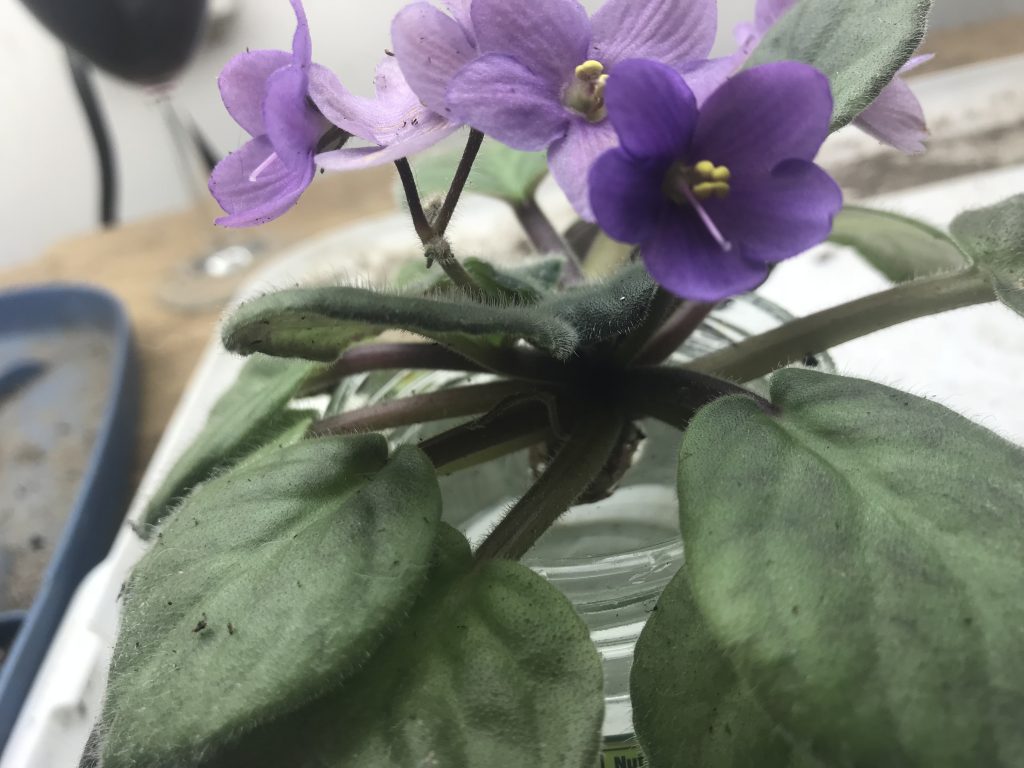 I also pulled off all the flowers and some of the more wilty lower leaves.  It’s here in the very upper right of this pic, just out of reach of the direct gaze of my red/blue LED here.  Good luck, little Saintpaulia. 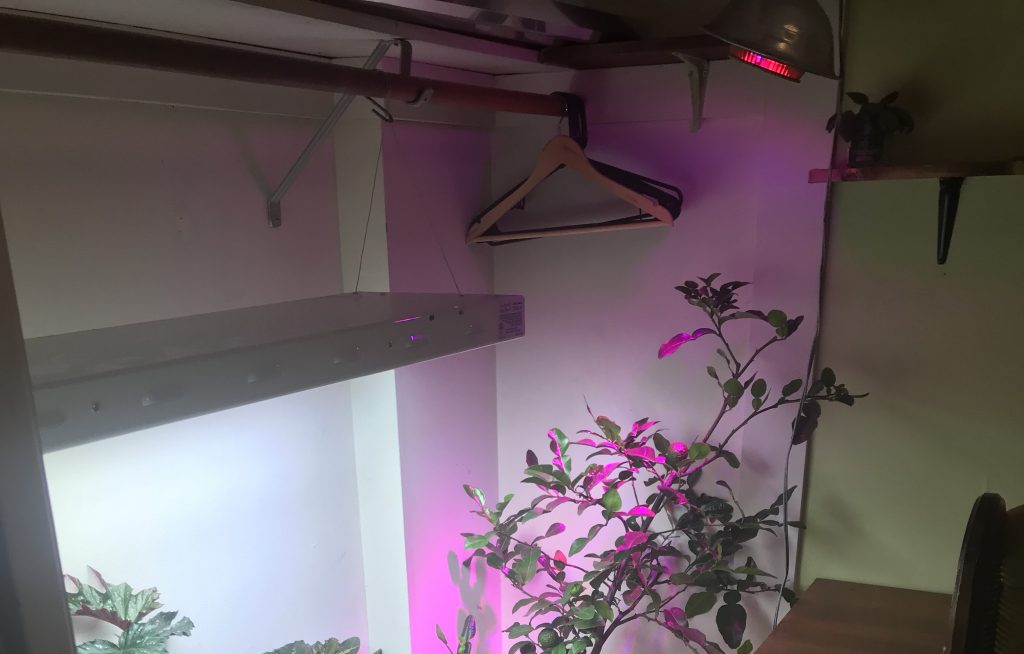 I did a similar dissection to another Saintpaulia several weeks ago: it had grown a double crown and then got crown rot.  I split it and put each clean crown into water and now both are growing lovely roots.  They will go into a more free-draining potting medium tomorrow in small pots.

Welcome to my blog and thanks for reading.  I hope you enjoy it.