I’ve made promises to show you this wonderful garden, and finally, here we are.  Just the backyard today – there’s a lot going on! We decided to call it “Place Pigalle” because of the two lovely pug crosses (x rat terrier) that live here – we’re always referring to them as piglets or pig-something, so we thought “Place Pigalle” was funny and fitting.  It’s also the name of a public square in Paris, and a fancy Seattle restaurant.

So first let me introduce you to the dogs, Maggie (left) and Oliver (right).  Maggie was at the plant swap at my house, so some of you may have met her. Her look here is a “ball request”.  Oliver’s look is one of general superiority.  He is extra fancy.  Parisian, doubtless.

They are wonderful dogs and good friends with my dog, Rudy.  They’re quite a bit easier on a garden than Rudy, though!

Above is the view when you stand on the steps that are the entrance to the garden through a French door. This time of year, the Magnolia dominates, but when it’s bare, you can see two beautiful plants behind it, one of which is kind of visible here: Metapanax delavayi and Eucalyptus parvula.

I had to get two photos from this magical vantage point. 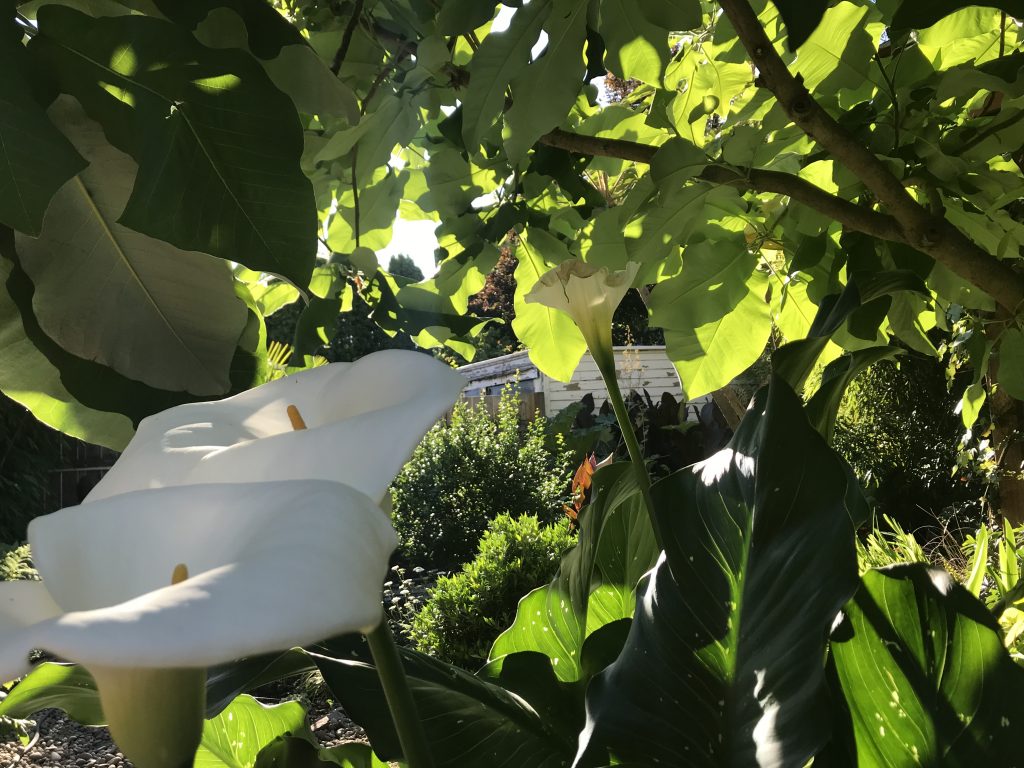 In the second photo (above) you can see a tall, dark, and handsome Poncirus trifoliata glowing in the evening sun – it’s just to the right of the calla flowers.

If you look to the left you see this:

Which is just about the best Fatsia ‘Spider’s Web’ I’ve ever seen.  It was a bit ragged after the winter of 16/17, but you just tidy them up and they grow out of it.  This the north wall of the house.

Back to the Magnolia area.

In addition to the callas, the Magnolia’s underplanting includes Thalictrum that is flowering up into the Magnolia’s canopy (how did I not photograph that? It was over 8′ tall), a mix of interesting hardy Geraniums, a couple stands of fantastic orange-flowered Iris domestica, this amazing Corylopsis which I believe is C. pauciflora, and lots of Bletilla striata.

The Corylopsis absolutely glows, more so than these photos even show. I love it so much I took cuttings and will plant one of them into my garden soon.

At the edge of this patio area, this Acanthus demands attention! There are two of them. 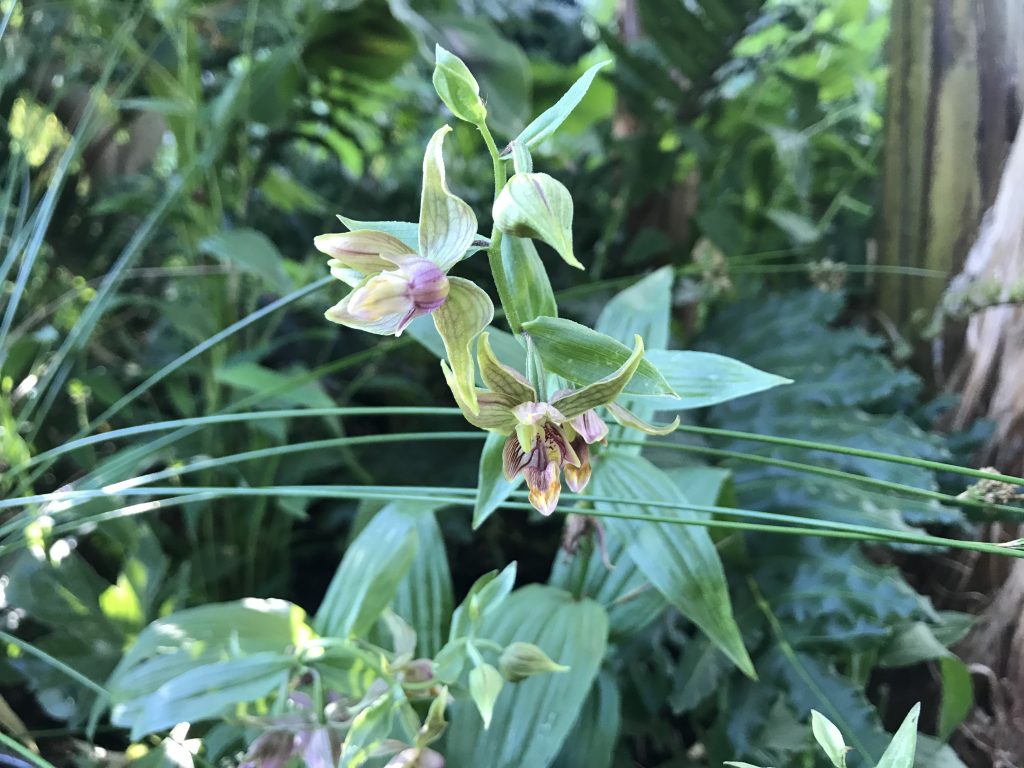 An about-face from there puts you face-to-face (well, ok, knee-to-face) with a big stand of whatever curiosity this is (can anyone ID this for me?).  Orchidaceae, to start. This is amid some rushes, a lot of Sarracenias, the cool architectural Equisetum, several amazing ferns, and a big stand of bananas.

In the picture above you can make out the multiple trunks of Metapanax delavayi, as well as an orange Abutilon on the other side of the koi pond. Looking straight up from there, you get this:

Above, at the base of the Eucalyptus, there are a couple of big floppy Phygelius and some Lobelia tupa which you’ll have to take my word for. The back row consists of Phyllostachys nigra, Schefflera delavayi, and Chionanthus retusus at right.

In the far corner, a very protected spot, a young Embothrium coccineum grows against a very cool metal thing that came from a neighbor around the corner.  I’m not sure if said neighbor made it or if it actually originated at the BBC Steel scrapyard.  Under it are a copule of Carex?, A Hebe (lots more of that same Hebe in the front yard) and the Euphorbia is ‘Blackbird’ or similar.

Over in the other corner…

And that’s a second stand of Phyllostachys nigra to the left behind the Lobelia.

Continuing along the path around the pond…

A BIG stand of the really tall Cannas – these get to 12′ by the end of the season.  A Tetrapanax baby from the main one has been allowed to grow in here and it’s really cool-looking I think.

Across the path from that scene is the bubbler for the pond.

A view of the pond from the other side.  Abutilon ‘Tiger Eye’ seems likely, with burgundy Eucomis and Potentilla gelida – we’ll see more of that in a minute.

There are at least three different Sarracenias at the pond edges.

Now for a new area.  Originally, a large triangular section of this backyard was a meadow of gleaming lime green Irish moss (Sagina subulata), with a Sarracenia bog in one part of it and a Poncirus trifoliata as a focal point.  The Sagina proved much too labor intensive for my friends who live here, so a drastic design change occurred.  In addition, there was a wooden fence covered in Parthenocissus quinquefolia.  The fence was rebuilt and the Virginia creeper was removed at the time.  So this section was looking very stark: just a plain new wooden fence and a lot of weeds and grasses where the Sagina had failed to compete with them.

I encouraged my friends to consider canopy layer first.  Several tree ideas came up: Trachycarpus (they love them and wanted another), Eriobotrya japonica or Loquat, and Lyonothamnus floribundus ssp aspleniifolius, the Catalina ironwood, were in the final running.  In the photo below, you can see the Trachycarpus made the cut.

This Gunnera was also moved here from another part of the garden that is now a patio area with irregular rock pavers similar to the original patio area you saw in the Bletilla photo earlier.

For the other tree, they had to choose between a loquat and a Catalina ironwood. I suggested they go look at mature specimens of each tree – the big loquat on SE 12th just north of the Max tracks near Clinton Street, and the two Lyonothamnus in the parking lot near Pomarius Nursery on NW Vaughn between 19th and 20th

After seeing and standing under the two tree options, the choice was made: 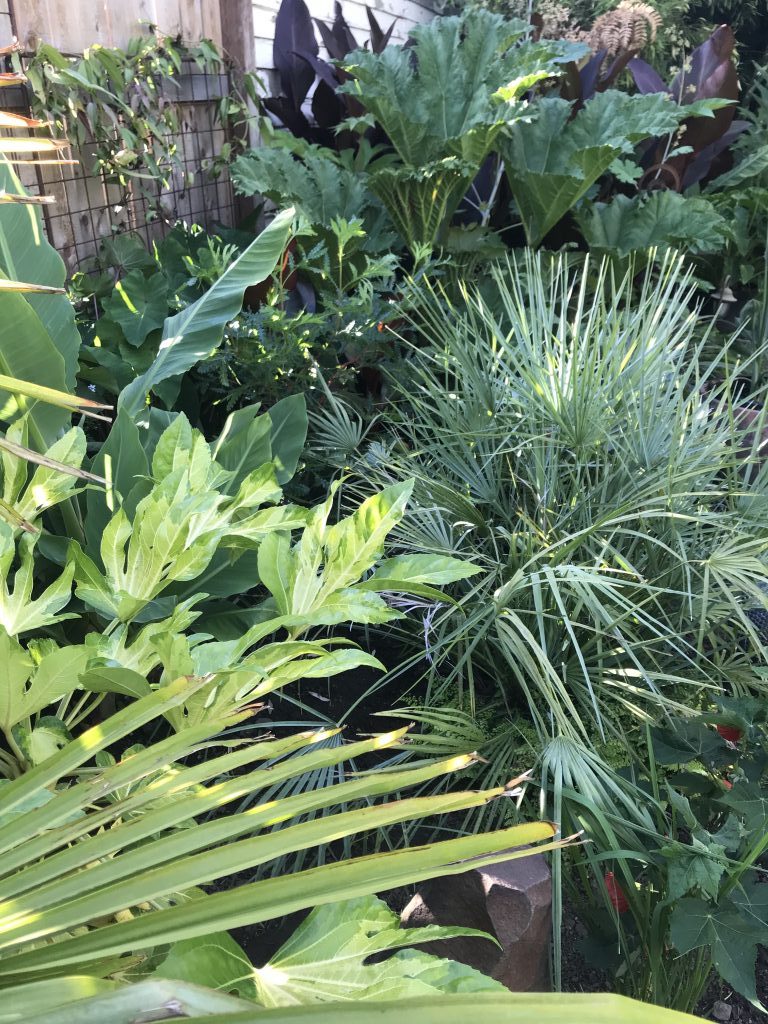 Do you see it in there? It’s the Lyonothamnus (yay this was the choice I’d have made myself)!  Right in front of that, dominating this scene which admittedly is pretty much all plants that want to dominate a scene, is Chamaerops humilis var. cerifera/argenta, the blue Mediterranean fan palm.  The little one I have came from the same grower – they were really sweet and bought it for me while they were there!

Also pictured above: at left, Fatsia japonica ‘Murakamo Nishiki’, with Musella lasiocarpa behind it, a bunch of Colocasias along the fence, and climbing on the fence is an evergreen Clematis.

The new Trachycarpus came from Palmscape in Boring.  Turns out if you spring for a big one, they deliver it and even plant the thing in the ground for you! How bout that.   This one gets a Clematis ‘Rooguchi’ trunk adornment.

The ground cover layer in here consists of this combination, echoing the color scheme of the Eucomis and Potentilla gelida:

Across the path with slightly different plants we echoed that color scheme again:

There’s still a central meadow-type area here – the original design was (I thought) quite brilliant in that the sea of lime green Sagina and well as the wall of Virginia creeper offered large areas of visual and spatial relief to an otherwise really exciting garden.  Well, we just couldn’t keep that.  So what we tried to do was maintain a fairly strict color palette, tying in as much as possible with what was already present.  Hence the purple/silver theme you see above.

I couldn’t get a satisfactory wide shot of this meadow area but I will sometime – it’ll be better after it’s filled in a bit more anyway.  For now, here are some of the plants we used.  Anigozanthos flavidus and Orlaya grandiflora above both came from Xera, as did the Helianthemum and I believe also the Astelia in the previous photo.

That’s almost it for the backyard.  Of course there are dozens of plants and vignettes I didn’t focus on, but we’ll do more tours for sure.

I did say this was going to be back yard only, but I can’t resist one picture of a particularly stunning plant in the front.  You’ll see more later, but for now, behold this unreal white Dierama: 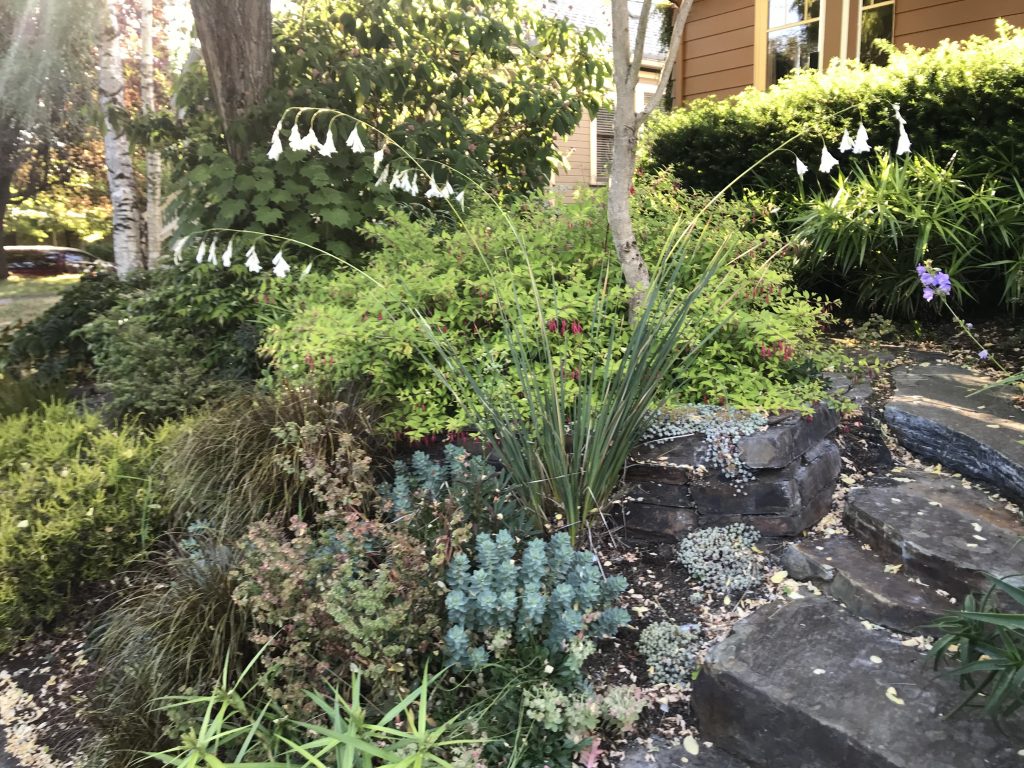 It was incredibly difficult to get these photos because I had Rudy on a leash and he was pulling hard because so many new smells! 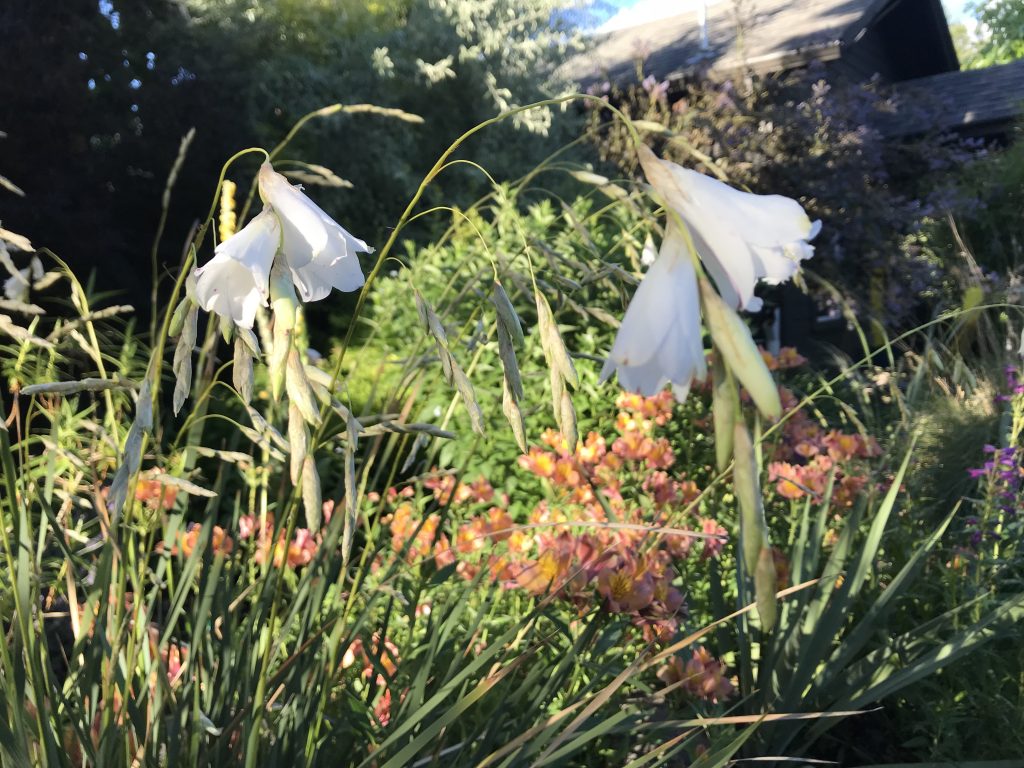 Crappy photos but you get the idea. There are two big clumps of them and they’re just stunning!

I hope you’ve enjoyed this initial tour.  I promise there will be more! 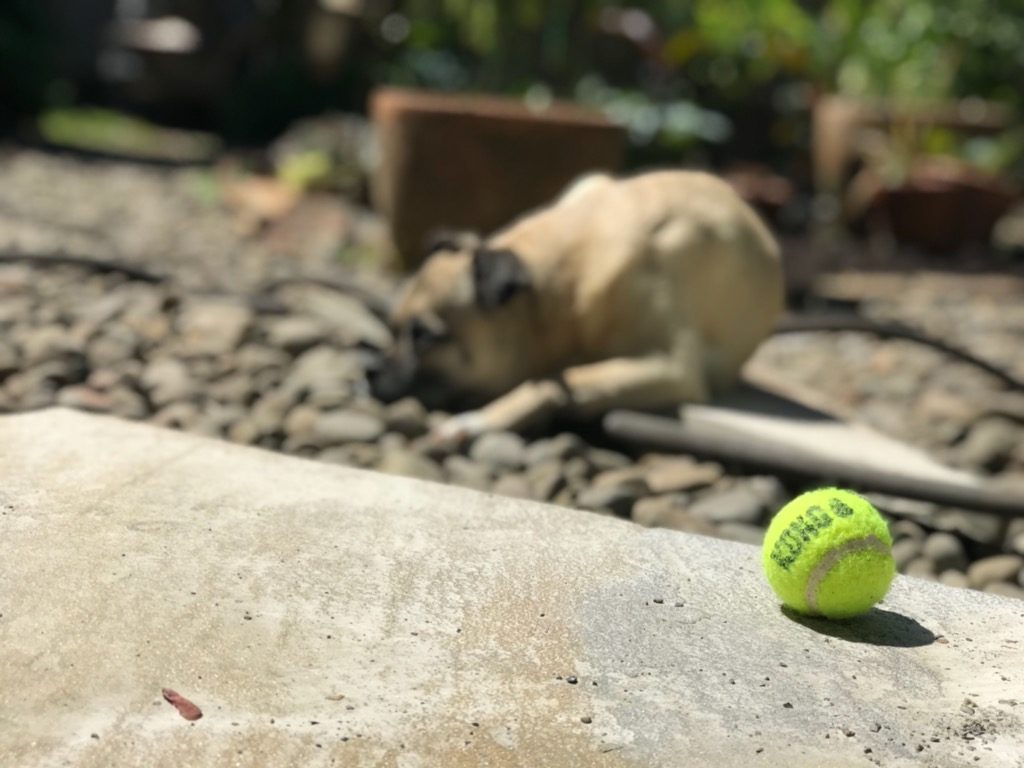